Norwegian offshore operators spud 57 exploration wells last year across the country’s continental shelf, according to a review by the Norwegian Petroleum Directorate. 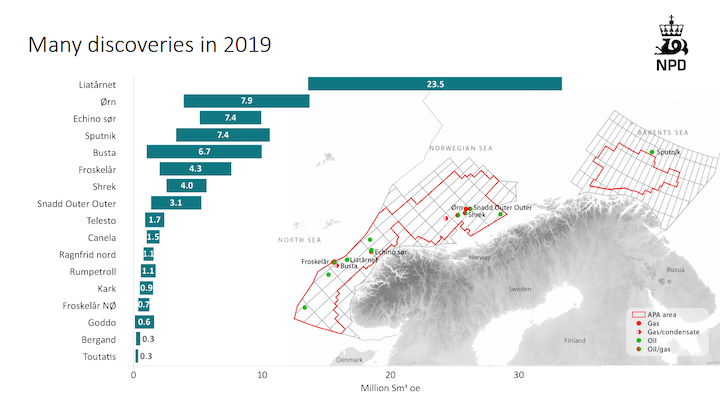 This was four more than the total for 2018, and many were in under-explored areas. In total, 37 exploration wells were drilled in the North Sea, 15 in the Norwegian Sea, and five in the Barents Sea.

Drilling led to 17 discoveries, 10 in the North Sea, six in the Norwegian Sea, and one in the Barents Sea. Although some were small, they could warrant development via tie-ins through nearby platforms and pipelines.

“The last two years have seen a marked increase in proven volumes compared with the three previous years. This shows that there is a connection between the number of exploration wells drilled and discoveries made,” Sølvberg said.

At the end of the 2019 a record 87 Norwegian fields were in production. Most of Norway’s oil and gas still comes from the major fields; around half the fields are subsea tiebacks to existing infrastructure.

Based on current development plans the NPD expects overall production of oil and gas in Norway in 2024 to be close to the record year of 2004, with Johan Sverdrup Phase 2 and Johan Castberg coming onstream in 2002 in respectively the North Sea and the Barents Sea.

In addition to Sverdrup Phase 1, the Oda, Trestakk, and Utgard subsea developments came onstream last year, while Norway’s authorities approved plans for seven fields. The largest was Sverdrup Phase 2: the six others have a combined capex of NOK38 billion ($4.27 billion).

Up to 90 discoveries are being considered for development, the review added.

When the area solution for power from shore on the Utsira High in the North Sea is in place in 2023, more than 40% of production, according to approved plans, should be operated using power from shore.

The NPD expects this percentage to rise significantly toward 2030 based on companies’ current plans.

For 2019, the review estimates total investments (excluding exploration) across the Norwegian shelf at around NOK150 billion ($16.87 billion), 17% higher than in 2018, and expenditure this year will likely be similar, but followed by a decline.