Aker BP is Norway’s most successful driller this year 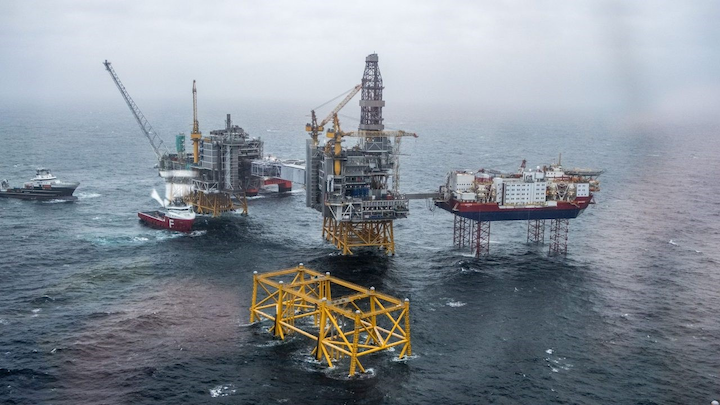 OSLO, Norway – Thirty exploration wells were completed offshore Norway during the first six months of the year, according to the Norwegian Petroleum Directorate.

Six discoveries resulted: four in the North Sea and two in the Norwegian Sea.

Aker BP, operator of production license 869 in the North Sea, delivered the largest find at the Froskelår prospect, estimated to hold 10-21 MMcmoe recoverable, although that may have been eclipsed by the same company’s Liatårnet discovery in the same area, announced late last week.

Equinor proved oil and gas discovery in the Snadd Outer Outer prospect southwest of the Norne field in the Norwegian Sea, but a follow-up appraisal well had to be halted due to technical problems, so there is uncertainty over the recoverable volumes.

In addition, Equinor achieved minor finds of oil, near Visund in the North Sea, and gas/condensate close to the Kristin field in the Norwegian Sea. There were other small discoveries near Fram and south of Alvheim, both in the North Sea.

Another 25-30 exploration wells could follow during the second half of 2019, the NPD added, with the full-year total comprising around 35 in the North Sea, 15 in the Norwegian Sea, and six in the Barents Sea.

Source Energy has pre-qualified as a licensee and Inpex Norge and Chrysaor Norge are currently undergoing pre-qualification assessments. Others that have submitted applications to pre-qualify as a licensee or operator are: Japex, NCS E&P, Edge Petroleum, M Vest Energy, and Antares Norge.

This fall, the NPD has commissioned a new seismic survey over the northeastern part of the Barents Sea, having received government funding.

Currently 21 development projects are progressing: 14 in the North Sea, six in the Norwegian Sea, and one in the Barents Sea. They include smaller discoveries connected to existing infrastructure and major projects for improved recovery from mature fields.

The NPD expects more new project development plans to be submitted over the remainder of the year.