Recent research from Rystad Energy shows that oilfield service companies should begin recruiting later this year following the significant workforce reduction in the industry throughout 2014 to 2016. 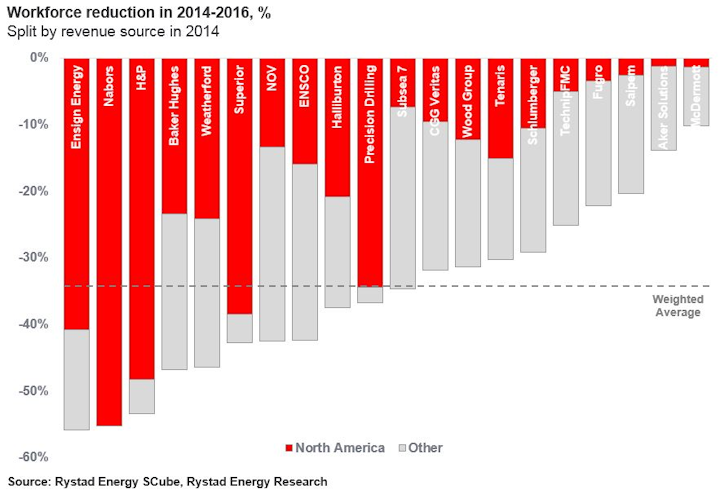 OSLO, Norway – Recent research from Rystad Energy shows that oilfield service companies should begin recruiting later this year following the significant workforcereduction in the industry throughout 2014 to 2016.

Service companies working within theshale sector are already starting to recruit again, the analyst firm said, after the top four service companies, all of which were exposed to the US land market, were forced to lay off between 30-40% of their workforce. Rystad found that companies exposed to more of the international market have cut more modestly, in the range of 20-30%.

“Among the top 50 service companies, around 300,000 workers or 35% of the work force, were laid off since 2014. However, the negative trend is about to turn, and over the last few months, we have seen more job-postings in North America from companies such asWeatherford, Nabors, and Precision Drilling, among others.

The report continued by observing that the “offshore industry in general has been more resilient, but 2016 saw a larger step-up in downsizing,” pointing to two recent examples. FMC Technologies reduced its staff by 1,000 as an initiative of cutting costs prior to its merger to form TechnipFMC. In October 2016, Saipem revealed that 800 jobs needed to be cut in Europe. Recruitment is expected to increase once the E&Pspending increases.

Rystad Energy expects shale-focused operators to increase their spending by 30% in 2017, whileoffshore spending will grow from 2018, associated with increased final investment decision activity.

Martinsen said that as more projects offshore are revived in 2017, Rystad expected offshore lay-offs to stabilize in 2017.

"Already, we see this trend inNorway and it is only a question of time before it starts elsewhere. The race for the best hands and brains has started in the industry and the companies that have laid off people in a responsible manner are likely to have a competitive edge going forward,” Martinsen concluded.