In part six of this series on the deepwater Gulf of Mexico structure inventory, production models and cash flow analysis are combined with scheduled removals on idle and marginal structures circa 2016 to generate a 20-year decommissioning forecast.

In part six of this series on the deepwater Gulf of Mexico structure inventory, production models and cash flow analysis are combined with scheduled removals on idle and marginal structures circa 2016 to generate a 20-year decommissioning forecast. Between 27 and 51 deepwater GoM structures are expected to be decommissioned through 2031, and between 12 and 25 structure removals are expected over the near term from 2017-2022.

The approach taken is to apply standard economic models, where applicable, and scheduled removals where economic models cannot be applied. All structures with NR < EL are scheduled for decommissioning using user-defined model assumptions, while all structures with NR > EL employ a production forecast model. Since side track drilling and tiebacks require capital spending and are speculative, they are excluded from consideration, as described in part five.

Three scenarios are used to tie the structure classifications and model assumptions defined in part five together – a ‘base’ (expected) case, a ‘slow’ (or low) case, and a ‘fast’ (or high) case.

For producing structures, economic limits are used to determine the EL-yr assuming no capital spending outside of normal maintenance activities, and are adjusted by the user-defined parameter τ based on historical data.

Auxiliary structures have an indeterminate decommissioning date, and although a portion of idle structures will enter this class in the future, we assume no transitions occur beyond the current inventory.

The slow/low case model parameters are selected to schedule idle structures and structures producing below their economic limit slower than the base case schedule (10 years versus five years), and for all other structures, decline curve estimates are used with EL-yr delays based on the upper range of historic removal times. 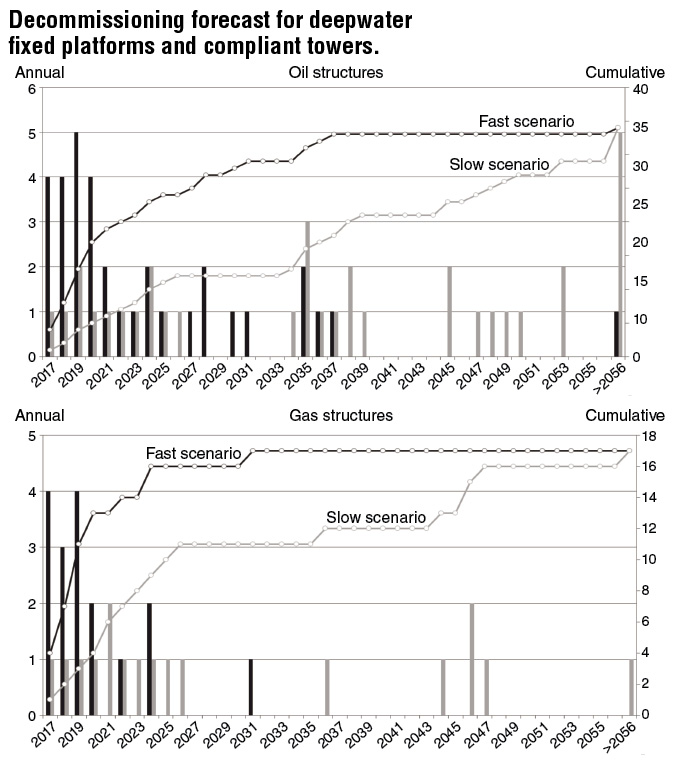 Using the model framework and assumptions specific to each scenario, the expected decommissioning times for the 2016 inventory of deepwater structures are depicted for the low and high cases for fixed platforms, compliant towers and floater structures.

For fixed platforms, oil and gas structures are shown separately since there is a mix of producers, while all floaters (except Independence Hub) are oil structures. 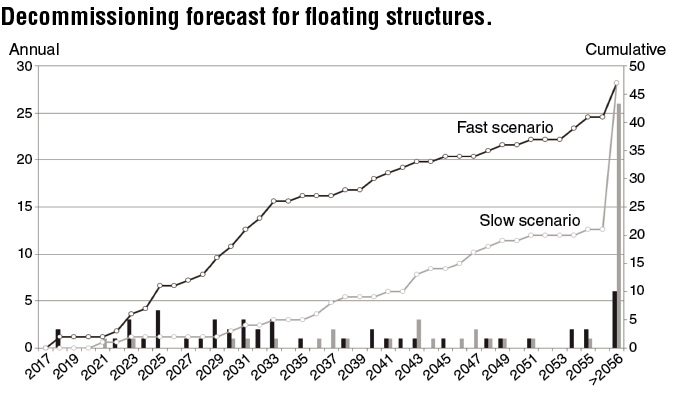 In both cases, there was no noticeable difference in the estimated decommissioning times except in a handful of structures, and for those structures affected there was only a difference of one or two years in the expected timing. This is not unexpected, since royalty rates and economic limits are generally secondary factors in economic modeling and do not have a major impact on cash flows and revenue streams relative to operating cost and commodity prices.

Whereas royalty relief may induce capital spending and incentivize operators to invest in new facilities, the ability of royalty relief to maintain marginal operations is less likely to be successful because of its incremental impact relative to other more significant factors.

Changing the commodity price or the parameter τ will shift the cumulative curves left or right in the obvious way. 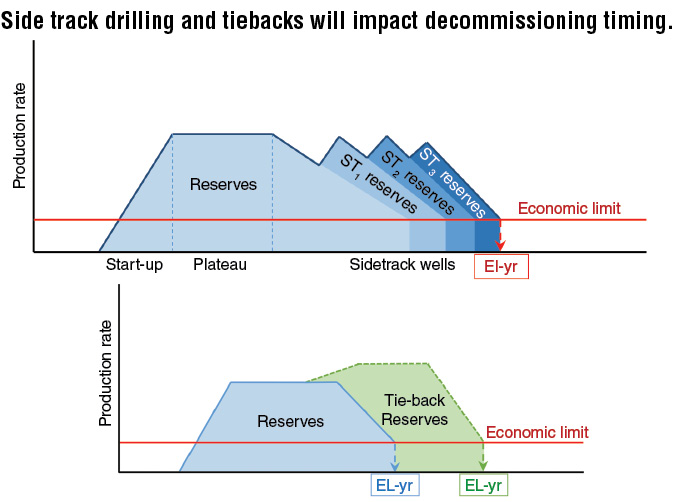 There are many factors that often delay decommissioning. Operators pursue side track drilling and tieback opportunities to maximize the value of their assets and to ‘keep the pipes full,’ and when opportunities become scarce or do not satisfy the economic-risk criteria required, may actively market their infrastructure for third-party processing or seek to divest.

Side track drilling can occur anytime and if successful will extend the life of the structure beyond the forecast model time.

Tiebacks may also occur at any time, on or off peak production, depending on the location of the asset, regional prospectivity, and many other factors. When additional production opportunities are no longer available, or are too risky relative to the potential rewards, the facility may be re-purposed as a compressor or pump station for pipelines crossing the structure.

Production data is accurate and decline models are standard and the models are expected to yield results consistent with the (conservative) capital spending constraint. The decommissioning model is therefore reliable with respect to the given assumptions, but given the large number of unobservable factors involved in asset reviews, it is not surprising that numerical models are limited in their ability to predict the exact outcome of such evaluations.

If model parameters are not well known, they can be treated as a free parameter when constructing the forecast, but it is generally preferable to minimize the number of these assumptions and to use historic data if applicable.

For example, the economic limit of production is a model parameter that may be based on historic data of similar structures in the region (first choice), an estimate of the structures direct operating cost (second choice), or simply a number that seems reasonable to the user (third choice free parameter).

In terms of the decommissioning forecast, there will always be uncertainty regarding the potential for tiebacks and alternative uses. •