In the Gulf of Mexico, there are 48 fixed platforms, three compliant towers, and 47 floating structures in water depth greater than 400 ft circa 2016. To date, 21 deepwater structures have been decommissioned. The authors review the deepwater GoM structure inventory and present model results that will help forecast future decommissioning activity and standing structures. 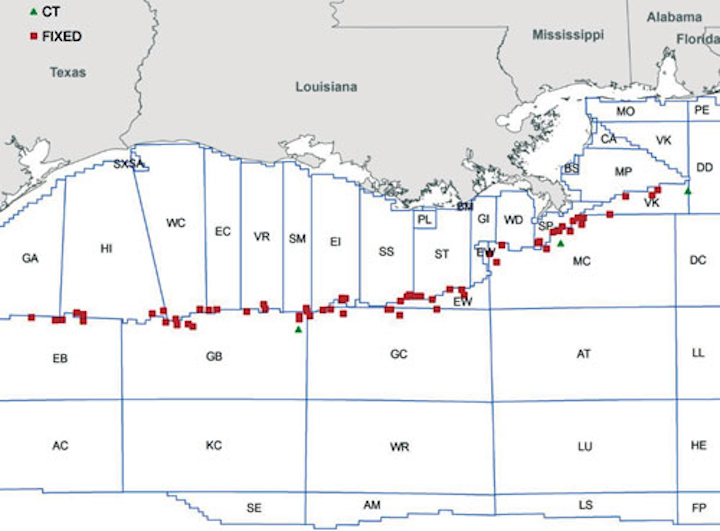 In the Gulf of Mexico, there are 48 fixed platforms, three compliant towers, and 47 floating structures in water depth greater than 400 ft circa 2016. To date, 21 deepwater structures have been decommissioned.

All of the floaters are currently held by production, but 12 fixed platforms were idle in 2016 and no longer produce, and at least four of these structures have been converted to serve auxiliary roles as pipeline junctions.

Several producing structures, including a few floaters, are currently long on their decline curve and are expected to be decommissioned within the next few years unless tieback opportunities materialize or an alternative use is found.

The purpose here is to review the deepwater GoM structure inventory and to present model results that will help forecast future decommissioning activity and standing structures. A key part of this effort will be to classify GoM deepwater structures by production class and structure type.

Subsequent parts of this series of articles will cover:

A total of 119 structures have been installed in the deepwater GoM through July 2017 - 64 fixed platforms, three compliant towers, and 52 floating structures.

To date, a total of 16 deepwater fixed platforms and five floating structures have been decommissioned, leaving an inventory of 48 fixed platforms, three compliant towers, and 47 floaters circa 2016.

Floaters are scattered throughout the region but most are concentrated in the Mississippi Canyon and Green Canyon protraction areas.

Most of the central deepwater protraction areas are rectangular and measure approximately 2° East-West and 1° North-South, or about 120 miles by 60 miles in areal extent, unless clipped by another geographic boundary or planning area. Recall that 1´ (minute) is defined as one geographic mile at the equator, and at the GoM’s 30° latitude is approximately one mile. Hence, the protraction areas are spacious and the density of deepwater structures sparse.

About two-thirds of all deepwater floaters reside in Mississippi Canyon and Green Canyon, with all other areas limited to less than three structures. Protraction areas Garden Banks, Viosca Knoll and Walker Ridge all have three structures circa 2016. Alaminos Canyon, East Banks, Ewing Bank have two structures; and Keathley Canyon has one structure.

Structures are classified according to their production status, whether they are currently producing, i.e., structures produced during year of evaluation (producing); currently not producing, i.e., structure did not produce any hydrocarbons during the last year but previously produced (idle); or structures that have no (current) production links to wells but serves in a support role (auxiliary).

Producing and idle structures that plug and abandon all their wellbores and are repurposed for another function are re-classified as auxiliary.

Circa 2016, there were 86 producing structures in deepwater, seven idle structures, and five auxiliary structures.

Almost all of the deepwater fixed platforms were installed to drill and complete wells from platform rigs with full oil and gas processing capacity, and typically contain a dozen or more dry tree wells. Later, fixed platforms also served as host for subsea (wet) wells and as pipeline junctions.

If subsea well production is processed at the facility, the structure will host umbilical and electrohydraulic control systems, storage tanks, and related equipment. Deepwater fixed platforms can readily accommodate subsea tiebacks because of their structural stability and strength.

There are only three compliant towers (CT) in the GoM, and as their name suggests, the structures are compliant in the sense that they do not attempt to resist all environmental lateral forces through their piling alone. Instead the structures are designed to permit limited movement with the waves.

CTs require less steel (strength) in construction than fixed platforms and their foundation bases do not expand with increasing water depth. CTs have a constant cross section throughout the water column much like radio transmission towers on land.

Baldpate and Petronius are of more recent vintage being installed in 1998 and 2000 and are still prolific producers, generating $153 and $188 million, respectively, in 2016. 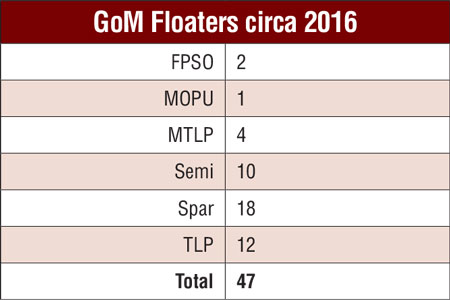 Deepwater floating facilities come in a variety of types and configurations that reflect the multiple tradeoffs in cost and risk involved in development strategies and the preferences of their owners.

Deepwater development is of a completely different character than in shallow water. Reservoirs may be in unproduced geology in new or existing basins/plays, deeper reservoirs are characterized by higher pressure/temperature, or challenging reservoir-fluid properties and impurities. The complex and risky nature of the development can be driven by location (e.g., seabed terrain), water depth, remoteness from existing infrastructure, and extreme environmental conditions. Frequently, combinations of these factors are represented in a single project, contributing to high project complexity, high cost, and long periods between investment sanction and first production.

Surface piercing articulating risers (spars) and tension leg platforms (TLPs) are the most common type, followed by semis. Only two FPSOs are used in the GoM because of the extensive pipeline networks in the area.

Deepwater floaters host dry tree wells, wet wells on lease, wet wells off lease, and may process and/or transport production from third-party facilities. Deepwater structures may be owned and operated by the well owners or a third party and many creative financial arrangements have been pursued over the years.

Wet well solutions have remote subsea wellheads which are connected to the vessel by steel or flexible catenary riser systems, and in some recent cases (e.g., Olympus, Perdido) the wellhead/tree may be positioned directly below the structure to reduce topsides weight - these are referred to as direct vertical access wells. Dry trees reside above the waterline and are connected to the wellbore with a top-tensioned riser.

Wet tree systems include all variations of units, including floating production, storage, and offloading vessel (FPSO), semisubmersible (semi), spars and TLPs. Dry tree solutions are limited to spars and TLPs.

Within each floater class, configurations have evolved into subclasses and occasionally new hybrid classes. For example, spars come in three varieties - classic spar, truss spar, and cell spar, and a smaller version of the TLP is referred to as a mini TLP (MTLP) and classified by design as SeaStar MTLP and Moses MTLP. A larger, extended TLP (ETLP) is under construction at Chevron’s Big Foot field.