Deepwater Gulf of Mexico installation and decommissioning activity trends are reviewed and data derived from end-of-life production are summarized to provide insight on economic limit statistics. 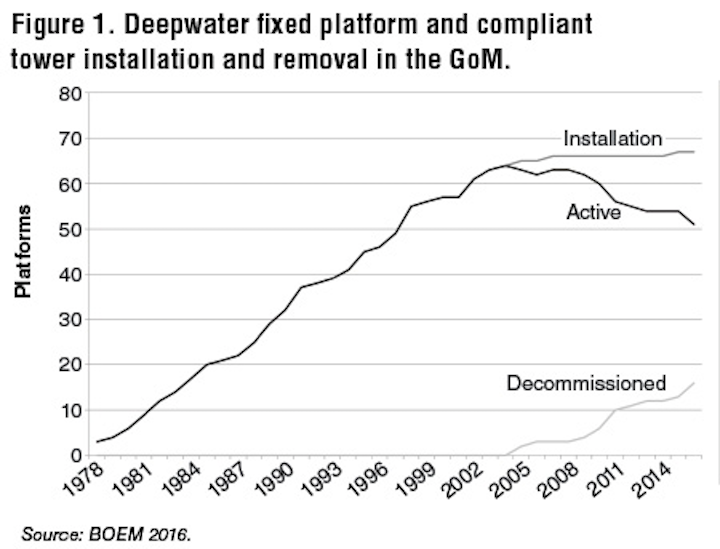 The Gulf of Mexico (GoM) is one ofthe most actively explored deepwater basins in the world. When projects are sanctioned, they require extensive planning, engineering, and construction work to complete.

Operators pursue side track drilling and tieback opportunities to maximize the value of their assets and to ‘keep the pipes full,’ and when opportunities become scarce, they may actively market their infrastructure for third-party processing or seek to divest.

Near the end-of-production, when all possible opportunities are exhausted and the structure can no longer serve a useful purpose, planning for decommissioning begins.

Only a few deepwater structures are installed or removed annually and these activity levels are not expected to change in the future.

In recent years, the number of fixed platforms installed throughout the GoM have diminished significantly, especially in shallow water, and in the deepwater similar trends have been observed. 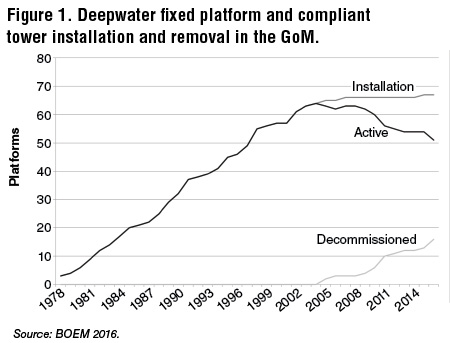 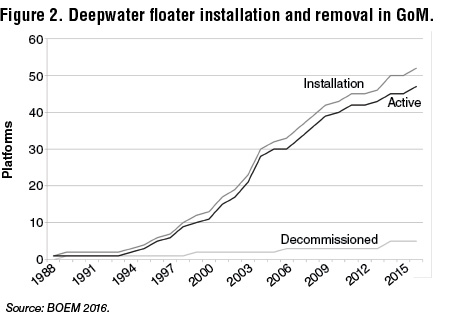 Six fixed platforms have been installed in water depths greater than 1,000 ft and all are currently active. They include, besides Cognac and Bullwinkle, Virgo, Amberjack, Pompano, and the recently installed Coelacanth.

From 1985-1999, TLPs with dry tree wells and topsides integrated with the hull at quayside dominated installations.

From 2000-2007, 30 floater developments were sanctioned and marked the introduction of large newbuild semis and the widespread acceptance and adoption of wet tree developments. Most TLP and spar developments during this period were integrated offshore.

In the aftermath of Hurricanes Katrina and Rita in 2005, updated metocean criteria was adopted and a new set of developments were installed over the past decade.

All the semisubmersibles were towed back to shore for decommissioning, while the majority of the other deepwater structures were either reefed in-place or towed to a deepwater reef site.

Fourteen of the 16 decommissioned fixed platforms were primarily gas producers, and the average time to decommission after the last year of production was five years, with a range between two to 10 years.

Eight structures, all gas producers, had inflation-adjusted gross revenues of less than $3 million (2014$) the last year of production (average $750,000). In addition, these same eight structures had an average gross revenue of $6.1 million the second-to-last year of production, suggesting that on average once a deepwater gas platform generates about $6 million it has two years or so before it becomes uneconomic, and then another five years on average before it will be decommissioned.

The average and median inflation-adjusted economic limits for all decommissioned fixed platforms were $9.9 million and $2.7 million, respectively. The large difference between these statistics is due to two structures with unusually high terminal revenues of $58 and $59 million.

Chevron’s Typhoon MTLP suffered catastrophic damage from Hurricane Rita in September 2005 and was decommissioned at a deepwater reef site at Eugene Island 367 in June 2006.

After ATP Oil & Gas declared bankruptcy in 2013 and no buyers for its Gomez semisubmersible could be found, it was decommissioned in March 2014 and towed back to port at Ingleside, Texas.

Anadarko decommissioned the Red Hawk spar in September 2014 at a deepwater reef site in Eugene Island 384.

Inflation-adjusted revenues the last year of production for the five floaters ranged from $4.1 to $82 million, and the average revenue was $33 million ($31.2 million median).