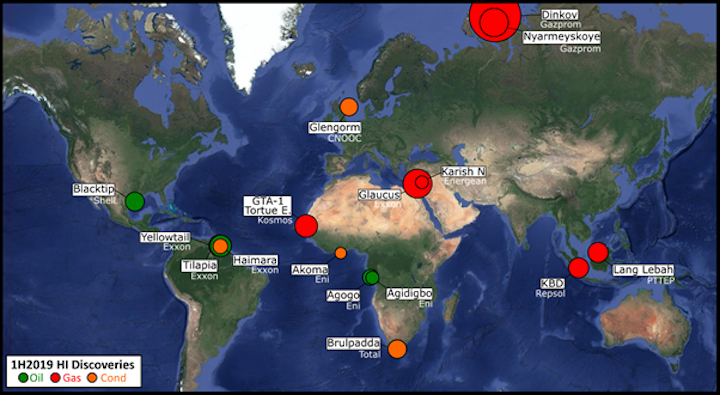 LONDON – In the first half of 2019, 51 high-impact exploration wells were completed, compared to 36 in the same period in 2018, according to Westwood Global Energy.

Senior analyst Jamie Collard said gas discoveries are up and oil down on 2018. The commercial success rate has also improved, running at 37% so far compared to ~27% recorded in 2017 and 2018.

In the first of the year, 16 discoveries estimated to be larger than 100 MMboe were made, with the largest discoveries all being gas at Dinkov (~14 tcf) and Nyarmeyskoye (4.3 tcf) in the Kara Sea offshore Russia, and Glaucus (4.5 tcf) in the Eastern Mediterranean offshore Cyprus. The largest oil discoveries are at Yellowtail and Tilapia offshore Guyana, both at more than 300 MMbbl.

In addition, 18 frontier play tests were completed with only one potential commercial play opener, at the Brulpadda-1AX well in the Outeniqua basin offshore South Africa.

Drilling in maturing and mature plays is expected to drive the increase in the well count with the frontier program expected to remain roughly in line with 2018, at around 32 frontier wells.

High impact drilling “hot-spots” will be the Suriname-Guyana basin, the MSGBC, the Gulf of Mexico, and northwest Europe, which is expected to have at least seven more high-impact wells, in addition to the 17 completed in 1H 2019. However, high-impact success in northwest Europe in the first half of the year has been limited, with only Glengorm estimated to be >100 MMboe.