Total has discovered gas condensate in the Brulpadda structure, 175 km (109 mi) off the southern coast of South Africa. 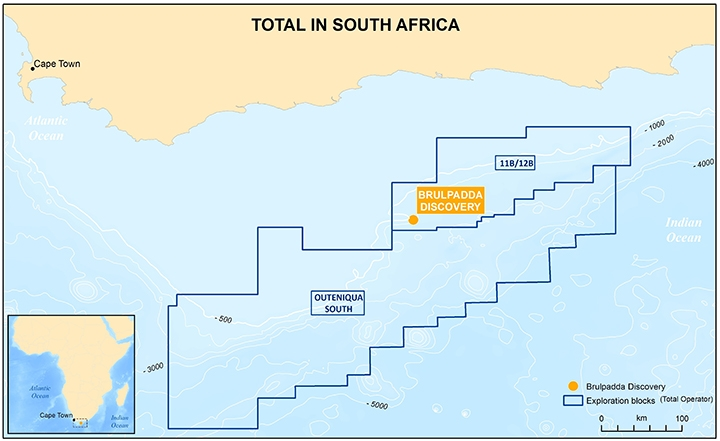 PARIS – Total has discovered gas condensate in the Brulpadda structure, 175 km (109 mi) off the southern coast of South Africa.

The well was then deepened to a final depth of 3,633 m (11,919 ft), finding more hydrocarbons in the Brulpadda-deep prospect.
Total added that it was able to leverage its experience in similar rough metocean conditions, such as in the UK’s west of Shetland region.

The company and its partners plan a 3D seismic survey this year, followed by up to four more exploration wells on the license.

Wood Mackenzie pointed out that the location of the Brulpadda-1 well was around 180 km (112 mi) southeast of PetroSA’s Mossel Bay gas-to-liquids plant.

Dr Andrew Latham, vp global exploration with the consultant, said Brulpadda was one of Total’s chief exploration targets this year.

“Even though the well isn’t an oil discovery, if Brulpadda proves to be anywhere near as big as the estimates of up to 1 Bboe, it will still be a game-changer for South Africa.”

Latham said the next planned batch of wells on the block would be on similar prospects.

A previous attempt to drill the well in 2014 had to be terminated due to harsh weather. This time, the weather was better and Total also had the benefit of a more capable rig, he claimed.

Theoretically the discovery could revive South Africa’s gas-to-power program, as well as providing a new source of gas to Mossel Bay.

However, Akif Chaudhry, Wood Mackenzie’s principal analyst, commodity analytics, cautioned: “While a strong case can be made for the development of the gas economy, long-term growth requires a clear plan from government.

“We expect the power generation sector to drive gas demand growth. However, at present, all South Africa’s open-cycle gas turbine units are set up to run on diesel.

“The country’s gas infrastructure is also limited, designed mainly to deliver gas to the Mossel Bay plant and to import piped gas from Mozambique.”

In a separate announcement, Total said it expected to grow its global production by more than 9% this year, helped by ramp-ups ofKaombo North offshore Angola, Egina off Nigeria and Ichthys off northwest Australia, plus the start-ups of Iara 1 in the Santos basin off Brazil, Kaombo South off Angola, Culzean and Johan Sverdrup in the UK and Norwegian North Sea.