The offshore industry has been talking about subsea processing for many years, but so far only Norsk Hydro shows any signs of action with its Troll Field trial of ABB's Subsis system. 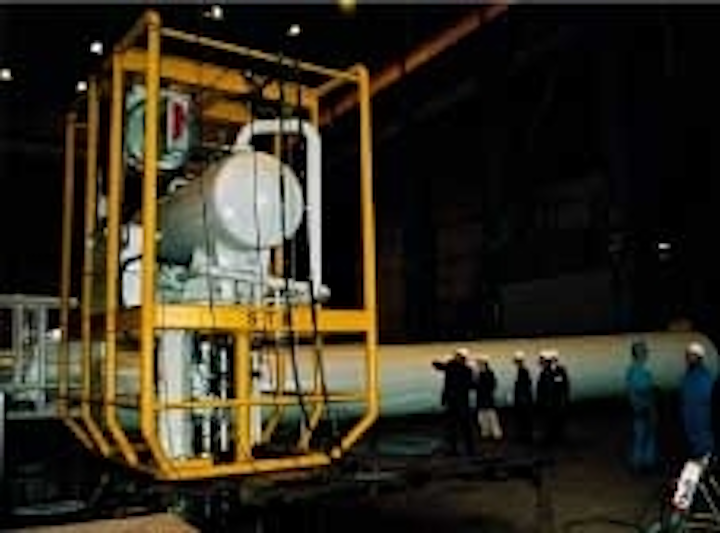 The offshore industry has been talking about subsea processing for many years, but so far only Norsk Hydro shows any signs of action with its Troll Field trial of ABB's Subsis system. By separating the produced gas and water phases at the wellhead and pumping only oil to the surface, production can be increased by up to 75%. This will become essential if companies operating in deepwater are to avoid wastefully pumping water thousands of feet to the surface with the oil. Separation close to the wellhead should also eliminate the problems associated with hydrates and multiphase flow and even very conservative estimates suggest that subsea separation can reduce production costs by $2-3/bbl.

An emerging contender to Subsis is a new version of the modular Alpha PRIME system. This was featured in Offshore in July 1999, and a full working system has now been built in Malmo, Sweden at the premises of Alpha Thames' parent company Kockums Holdings.

The AlphaPRIME concept uses a pair of remotely controlled modules that each incorporate all of the well's manifold, pumping, flow control, and processing units. The modules are electrically powered and, weigh 25-80 tons, depending on throughput requirements. They can be deployed in any depth of water yet are completely retrievable for maintenance or modification. This can also be achieved without well shut-in because a control system at the surface can simply divert flow to the spare module.

The newest development is a low risk version known as AlphaPRIME IST (Industry Standard Technology). This design uses conventional tried and tested manifolds, valves and components that are configured to fit the AlphaPRIME modular concept. Although electrically driven valve actuators are new to the industry, they are only used on the retrievable parts of the installation. Nevertheless, Alpha Thames says it will continue with their development and they will be phased gradually into future AlphaPRIME IST systems until they have achieved the ultimate level of compactness, light weight and ease of installation envisaged by its designers.

Although AlphaPRIME IST will not be quite as easy to deploy as the more advanced version, it will perform in the same way and will permit a more cautious introduction to subsea separation. The modular design also makes it possible to recover the unit and install new components for trial while maintaining production with the other remaining on the seabed.

Should a new component fail to perform as hoped, production can simply be switched to the spare module while modifications are carried out. This introduces a level of redundancy and that should eliminate any risk from the adoption of subsea processing.

Alpha Thames, based near London, was one of the first companies to commit itself to the study of subsea processing and since its foundation 11 years ago has built up a thorough knowledge of the technology and economics of the concept.

Much of its work has been applied to the development of new connectors, valves and actuators that have been created so that an AlphaPRIME module can be installed and operated on the seabed with optimum efficiency. All have been incorporated within the AlphaPRIME module that has been built in Sweden where it has been tested using a sophisticated well simulator. This can subject the module to detailed performance trials in the workshop by emulating the pressures and multiphase flow that it would be required to process when on the seabed.