GVA branching out into FPSO conversions and drillships

GVA Consultants, known worldwide as a designer of semisubmersible drilling rigs and production platforms, is broadening its horizons to include all kinds of floaters. 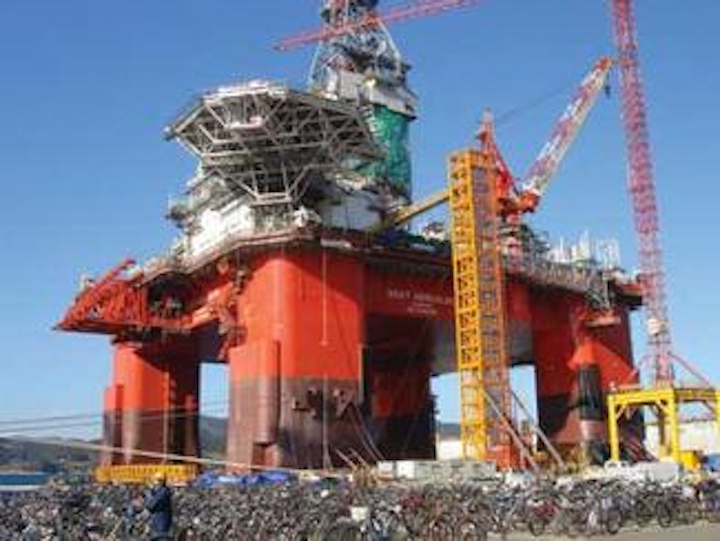 GVA Consultants, known worldwide as a designer of semisubmersible drilling rigs and production platforms, is broadening its horizons to include all kinds of floaters. It is already involved in its first FPSO conversion project, and plans to present a new drillship design to the industry later this year.

“From a company perspective our ambition is to expand, developing more products and widening our focus to get into other business than semis,” says business director Peter Larsson. “We look on the next 12 months as a thrilling period with a lot of opportunities.”

The company also has new semisub designs to publicize at OTC in May. Although last year it lost some 20 staff to Bassoe Technology, a newly formed local rival in Gothenburg (see separate story), it has more than filled the gap by recruiting experienced engineers.

Currently GVA Consultants (GVA-C) has 75 employees on its payroll, but some 35-40 outside consultants have been brought in to cope with the current workload, according to managing director Holger Eriksson. In February the company was planning to expand its office space to accommodate these extra numbers, which could rise further as co-operation develops with its owner, KBR.

Their relationship has become closer since KBR separated from Halliburton last year. “KBR have shown great interest in using our services and seeing what we can do for them,” says Eriksson. “It’s no secret that they are heavily involved in FPSOs, both newbuild and conversions, and bigger production semis.”

The two companies have complementary skills, with GVA-C providing the hull expertise and KBR the topside competence. One joint project is under way for a floating LNG ship, with GVA-C performing hull studies.

Mindful of the high average age of the engineering workforce, the company is also collaborating with KBR on a program to develop young engineering employees, allowing them to tap into the experience of KBR’s worldwide network.

GVA-C is already working on its first FPSO hull conversion, for the PetroServ floaterDynamic Producer. The scope of work involves reinforcement of the hull and modifications to the hull and deck while ensuring the necessary stability and hydrodynamic performance, according to Larsson. Twenty-five engineers are allocated to this job, which is due to be completed by summer.

Also on the monohull side, GVA-C is developing a drillship design. Drawing on trends observed with new tanker designs, this embodies a shallower and wider vessel than the conventional drillship  a width of 60 m (197 ft) instead of the conventional 40 m (131 ft)  to maximize both the deck area and the stability characteristics. “We’ve looked into it from a semi point of view,” says Eriksson. “A wider ship gives better motions.”

The company was hoping to be able to present the design this month. Motion tests will follow later in the year. Once the basic concept has been developed, the intention is to look for a drilling contractor partner or two to collaborate on taking the design forward. “We’re looking to design the ship around the activity,” says Eriksson.

Two new semi drilling rig designs are also in the works. One is for arctic operations which GVA-C is undertaking in partnership with a Korean shipyard, again due to be unveiled in March. The second new design is the GVA 10000, which should be ready later in the year. This is a deepwater unit with a variable deckload of 10,000 tons (9,072 metric tons)  much larger than any existing design  and capable of drilling in depths down to 12,000 ft (3,657 m).

Meanwhile GVA-C’s latest semi drilling rig design, GVA 7500, has gone down well, with six units currently under construction: two for Seadrill, two for Odfjell, one for PetroServ, and one for Grupo R. The first, Seadrill’sWest Hercules, is due to be delivered by Daewoo in May. “We’re also negotiating several more units, so we feel we’ve got a fair share of the market,” Larsson says.

The GVA 7500 is the company’s sixth generation design, developed to provide a cost-effective solution for drilling in extreme conditions of water depth and climate  it is rated for operations in water depths of 10,000 ft (3,048 m) and in Beaufort 10 sea states. To provide the necessary clearance over the sea surface for operating in harsh environments, the design incorporates a large air gap  17.5 m (57.4 ft). It is also attracting interest for other environments, the latest order being for a unit to work in the Gulf of Mexico, for which purpose the design has been modified.

Last year GVA-C’s contract on BP’sThunder Horse production and drilling platform, the largest yet built, was completed, and this year its work on BP’s Atlantis, another large production semi for deepwater operation, is also due to finish. Thunder Horse was left listing heavily after the passage of Hurricane Dennis through the Gulf in 2005, but analysis revealed that this had nothing to do with the hull design. According to Eriksson, it was in fact fortunate that the design incorporated a closed deckbox, a standard feature of GVA-C’s semis, as listing might otherwise have caused the platform to sink.