The Norwegian Ministry of Petroleum and Energy has offered 69 offshore production licenses to a total of 28 oil companies under the Award in Pre-Defined Areas 2019. 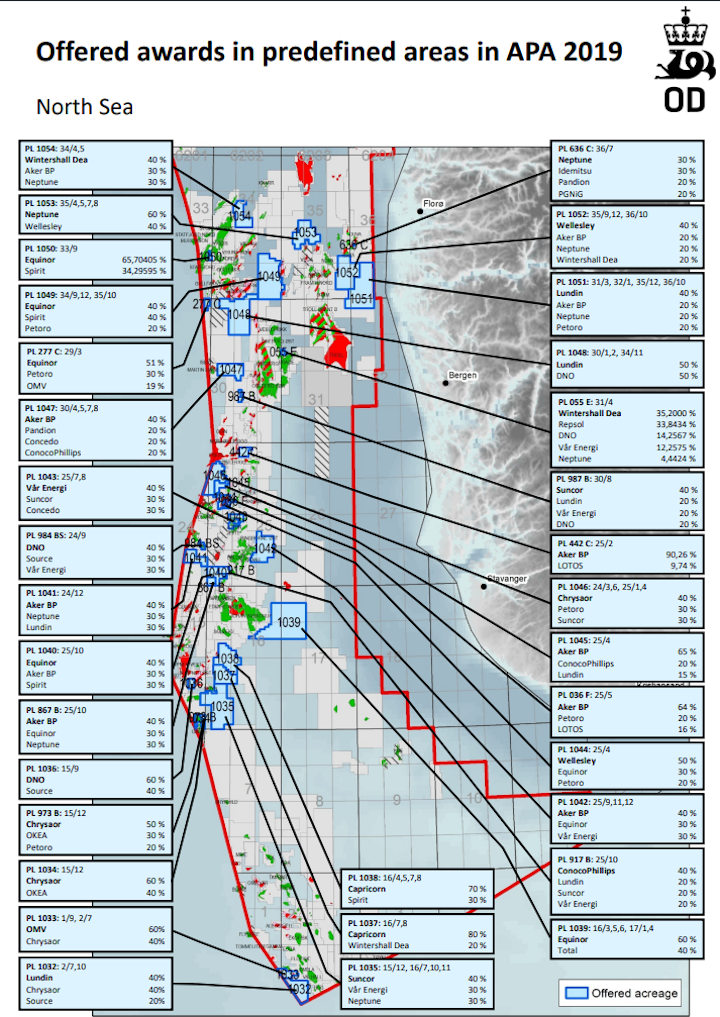 OSLO, Norway – The Norwegian Ministry of Petroleum and Energy has offered 69 offshore production licenses to a total of 28 oil companies under the Award in Pre-Defined Areas 2019 (APA 2019).

Thirty-three of the licenses are in the North Sea, 23 in the Norwegian Sea, and 13 in the Barents Sea. Operatorships went to 19 companies.

“Hopefully, the exploration in the awarded acreage will result in new discoveries,” said Minister of Petroleum and Energy, Sylvi Listhaug. “This is important to ensure employment, value-creation and future government revenue for Norway’s largest industry.”

Torgeir Stordal, head of exploration at the Norwegian Petroleum Directorate, said: “The 2019 awards with new licenses from the southern North Sea to the Barents Sea demonstrate the companies’ continued interest in the Norwegian continental shelf.

“Production licenses are being offered both in the Barents Sea and the Norwegian Sea which will require new seismic data and use of new technology to evaluate the resource potential.

“It is encouraging that companies show willingness to test new exploration concepts. Many are also focusing on proving resources near existing infrastructure.” 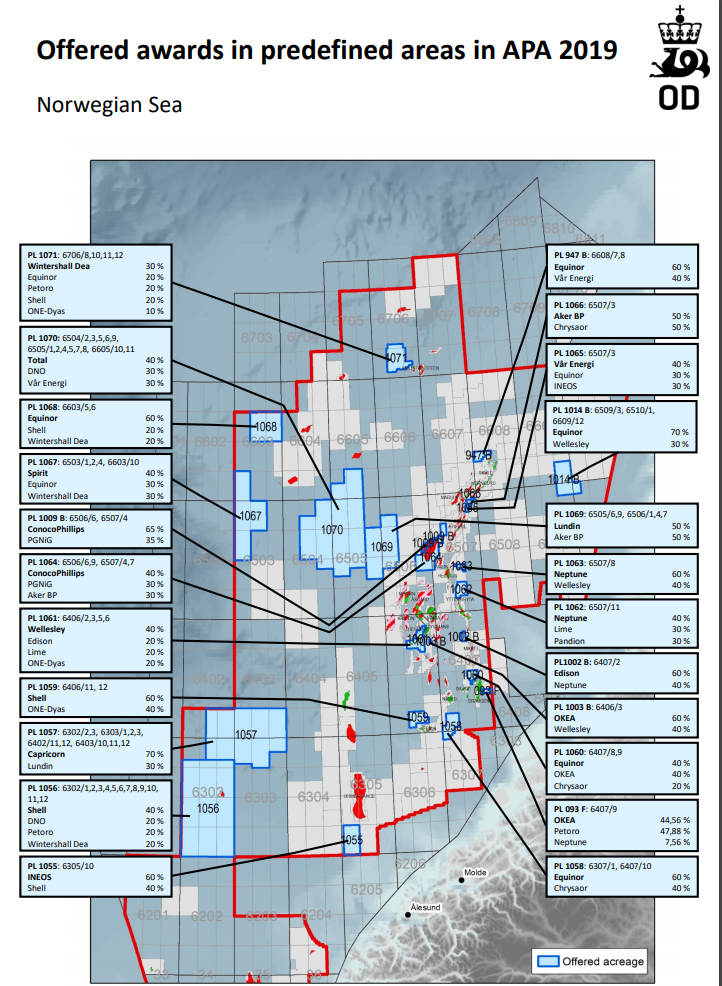 Equinor has been awarded interests in 23 of the licenses, 14 as operator.

“Our infrastructure-led exploration on the Norwegian continental shelf has been successful for many years,” said Nick Ashton, Equinor’s svp for exploration in Norway and the UK.

“This provides a good basis for high profitability and a low carbon footprint. In addition, we are actively pursuing new ideas in selected areas that meet the same criteria.

“This applies to the North Sea, as well as the Norwegian Sea and the Barents Sea, where we see potential in the Castberg, Wisting, Goliat and Snøhvit areas.”

Evy Glørstad, the company’s svp Exploration, said: “These awards strengthen Aker BP’s position in our core areas and is a basis for continued high exploration activity.”

Eleven of the company’s awards are in the North Sea (seven operated), three in the Norwegian Sea (one as operator), and one (also operated) in the Barents Sea.

Pandion Energy gained 20% of PL 1047 covering blocks 30/4, 5, 7, and 8 in the central part of the Viking Graben in the North Sea, between the Martin Linge and Oseberg fields.

The company also secured 30% of PL 1062 in block 6507/11 on the Halten Terrace in the Norwegian Sea, southeast of the Heidrun field, north of the Midgard field, and to the east of the Natalia discovery. Pandion has several existing licenses in the area and has experience from previous drilling on this block.

Wintershall Dea’s haul includes the Q35 area of the North Sea, close to the company’s producing Vega field and its Nova subsea development. Elsewhere in the North Sea the company picked up licenses close to its Brage field, Snorre, and Edvard Grieg.

In the Norwegian Sea the company has been offered three licenses that support its gas exploration strategy in the Vøring basin, and another in a newly opened area in the Møre basin in the southwestern part of the sea. 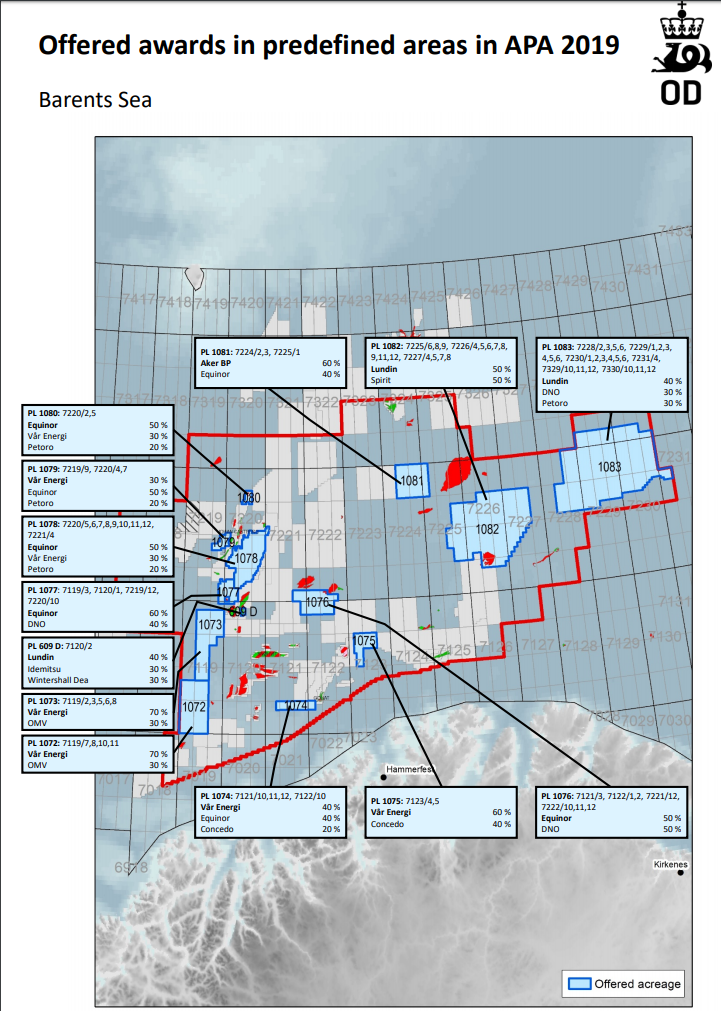 Finally, in the Barents Sea it has been given a 30% stake in the PL 609 D license, covering an extension of Lundin’s Alta oil and gas discovery in PL 609.

DNO Norge has been offered shares in 10 exploration licenses, two as operator. Five of the awards are in the North Sea, two in the Norwegian Sea, and three in the Barents Sea.