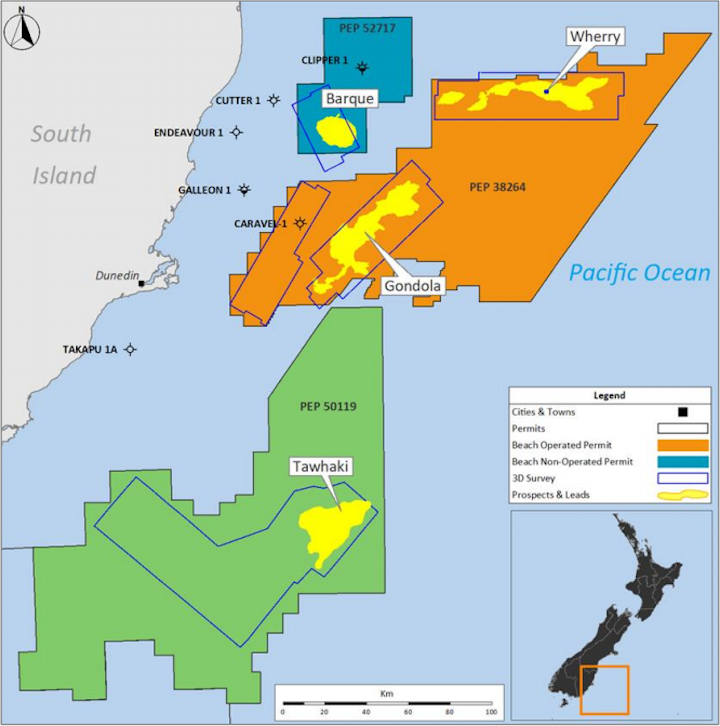 Map of the Great South and Canterbury basins showing the location of PEP50119 and the Tawhaki prospect relative to the Beach-operated PEP38264 permit and the Wherry and Gondola prospects.
(Courtesy Beach Energy)

Under the agreement, Beach will acquire a 30% participating interest in the permit in exchange for funding a 30% share of the Tawhaki-1 well cost and the associated work program and budget.

The transaction is subject to New Zealand government and regulator approval.

The PEP50119 exploration permit contains the large Tawhaki prospect and other leads. Tawhaki is a basement drape structural trap with up to 470 sq km (181 sq mi) under structural closure.

The prospect is defined by modern, high-quality 3D seismic data and interpreted to have Cretaceous reservoirs of similar age and quality to the excellent sandstones encountered in Caravel-1, about 130 km (81 mi) to the north in PEP38264 (Beach 37.5% and operator).

The Tawhaki-1 well is planned to be drilled in early calendar 2020 by the semisubmersible COSLProspector as part of a larger OMV-led drilling campaign.

Beach CEO Matt Kay said: “…Tawhaki is one of three frontier exploration wells Beach will participate in over the next 18 months, the others being Wherry to the north of Tawhaki and Ironbark in the Carnarvon basin…”