One of Shell's subsea tiebacks in the deepwater GoM has experienced various flow assurance issues related to the produced fluids, and unexpected unstable oscillating flow (slugging) has also been observed. The commercial transient multi-phase flow simulation tool OLGA was used to predict the slugging tendency. Several mechanisms that could provide reasonable explanation for the observed unstable flow were proposed and investigated. 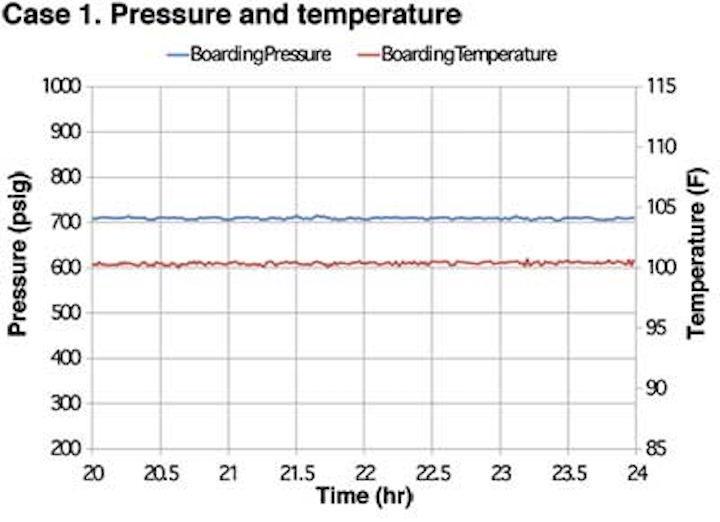 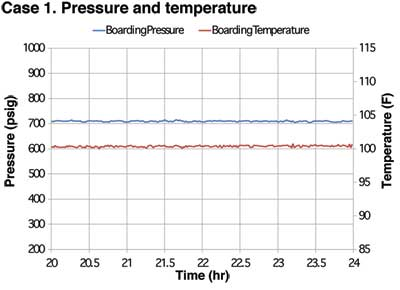 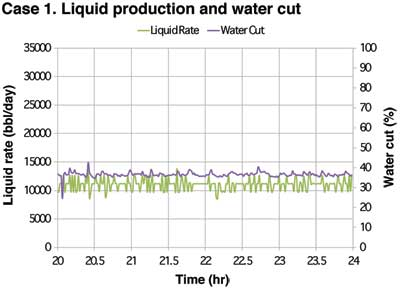 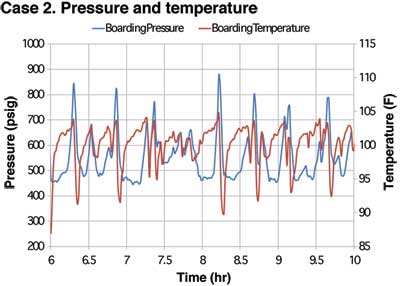 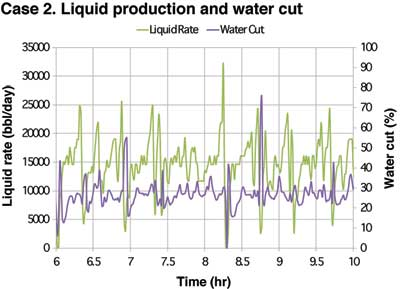 OLGA (version 5.3.2.2) was used to investigate the slugging tendency and validate possible slugging mechanisms of the system. The slug-tracking option was activated with the default delay constant of 150. The intent of using OLGA transient simulations was to capture the slugging tendency for each mechanism proposed. The explanations for the observations are mainly based on simulations and comparisons against the field data. Past experience indicates that slugging predictions made through the use of a multi-phase flow simulator (such as OLGA) are at the limit of the current understanding and modeling capability. However, this validated multi-phase flow tool can properly capture the slugging tendency and the sensitivities to various operating conditions.

A flow regime map was first developed using OLGA to identify the slugging boundaries of the system at the riser outlet. The flow map is presented as a function of total liquid rate and water cut (assuming a constant GOR of 900 scf/stb) for easier comparisons against the field data. Then the developed flow map was used to validate various mechanisms proposed to explain the slugging patterns observed in this field. Other possible mechanisms were also validated through OLGA transient simulations, such as severe slugging due to downward section upstream of the riser base, possible slugging due to choking effect by organic solid deposition, and emulsion/sludge-induced slugging by highly viscous emulsion/sludge in the subsea system. 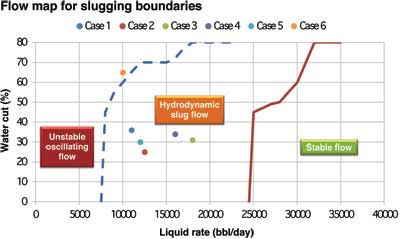 The six production cases retrieved from the field data were superimposed on the flow regime map. The operating conditions for all of the cases except case 6 fall into hydrodynamic slug flow regime. However, only cases 1 and 5 agree well with the field observation. Cases 2, 3, and 4, exhibit much worse slugging behaviors that cannot be explained with the flow map. Therefore, a few possible mechanisms /hypothesis for the slugging occurrence observed in cases 2, 3, and 4 were proposed.

Severe slugging. The necessary conditions for the severe slugging to occur include 1. A downward flowline section at riser base with stratified or annular flow; 2. Unstable flow in the riser, and 3. Liquid blockage at the riser base. For cases 2-4, those conditions are not fully satisfied and the observed unstable flow does not fall into one of the severe slugging types. For example, the flowline topography does not have downward section at the riser base and hydrodynamic slug flow is predicted. In addition, unstable flow is unlikely to exist in the riser due to moderate flow rates (even up to 18,000 b/d). Field data also show that there was no production starvation as seen for most severe slugging cases. Also, slug sizes are about 10-15 bbls/slug (less than 10% of the total riser volume), which are much smaller compared to the slug sizes during severe slugging.

Terrain-induced slugging. This is similar to the severe slugging in that liquid accumulates at low dips in the flowline instead of the riser base, as seen in the severe slugging. The liquid builds up at the low spots in the flowline and eventually gets swept out as slugs. The terrain slugs tend to occur at relatively low flow rates. The terrain-induced slugging is unlikely because the flowline shows no significant low spots and the flow rates are moderate.

Low dip at the riser base. Low dips may be generated along the flowline due to unequal settling in the mud more than 10 after the flowline was installed. In this case, a low spot just upstream of the riser base was assumed, which may lead to terrain/severe type of slugging as observed in the field. However, the OLGA simulation results did suggest that the low dip could introduce the terrain/severe slugging at topsides, mainly due to the high production rate of over 16,000 b/d. The predicted pressure, temperature, and water cut variations do not agree with the field observation either. In addition, the predicted manifold pressure is about 20% lower than the field data. With all the disagreements presented above, the hypothesis of low dip induced slugging is not valid to explain the slugging behavior observed in the field.

Choking effect. The field has experienced various solid depositions, including but not limited to wax and asphaltenes. Other field observations such as the inability to reach the target blowdown pressure, solid production during restart, and limited pressure communication between the manifold and topsides also support the hypothesis that solid deposition or even plug may exist in the flowline/riser system. The deposition/plug restricts the flow like a choke. Choked flow (slugging) could be developed due to this choking effect. The solid deposition was modeled in OLGA as a choke with a 1-in. opening. The size of the restriction was determined in order to match the amplitude of the boarding pressure fluctuations observed. The choking effect was also investigated with sensitivity to the plug locations. An OLGA simulation showed significantly smaller water cut and liquid rate fluctuations. The predicted manifold pressure is about 20% higher than the field observation. Therefore, it is unlikely that the hypothesis of obstruction in the riser or in the flowline leads to the slugging patterns observed.

Emulsion/sludge-induced slugging. The factors that supported the existence of the heavy emulsion/sludge in the system include:

To validate the hypothesis through transient simulations, the emulsion/sludge was modeled as a series of pigs with smaller diameter than the pipe ID. The pigs were launched from the manifold with a frequency of one pig per hour to match the slugging frequency observed in the field. The energy calculation was turned off to stabilize the OLGA simulations (therefore no temperature comparison). The simulation predictions for liquid rate, water cut, and pressure fluctuations at the riser outlet show good qualitative agreement with the field data. The predicted manifold pressure and slug size (15-20 barrels per slug) also showed good agreement with field data. The mechanism of emulsion/sludge-induced slugging seemed to reasonably explain the slugging behavior.

The origin of the emulsion/sludge may be due to subsea choking and/or incompatibility of the produced fluids from different wells. In addition, the recent well stimulation jobs may have introduced emulsified agents. Other solids, such as wax, sand, scale and asphaltenes that have been experienced in the subsea system also tend to intensify and complicate the emulsion/sludge issue.

The following slugging prevention and mitigation strategies were proposed with an emphasis on reducing the amount of emulsion/sludge in the system.

With regard to emulsion/sludge prevention and mitigation:

Topsides choking should be used with care because it will only be effective when flow instability is low-flow driven – for example, when flow rates are lower than 10,000 b/d with high water cuts of 60-70%. If slugging was observed at high flow rates where hydrodynamic slugging is expected, topsides choking may not be effective and it may even worsen the slugging issue due to significant pressure build-up behind the liquid slugs.