With the cost of deepwater wells reaching more than $500 million, and operational risks being potentially higher, obtaining the best possible seismic image of both the overburden and reservoir is essential. 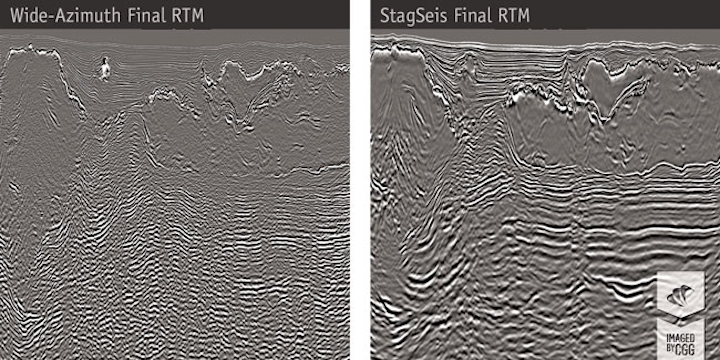 With the cost of deepwater wells reaching more than $500 million, and operational risks being potentially higher, obtaining the best possible seismic image of both the overburden and reservoir is essential. To this end, 3D seismic is proving itself to be a leading technology in de-risking offshore subsalt prospects in the Gulf of Mexico.

The goal here is to describe the collaboration and innovation that led to new seismic technologies that today are delivering remarkable images and reducing the risks associated with finding and producing oil and gas in the Gulf of Mexico.

At the end of the last decade, wide-azimuth (WAZ) acquisition and processing were providing the best available seismic images in the Gulf of Mexico. Yet even with the significant advances that WAZ brought to the industry, geologic structures below more complex salt were still proving too challenging to illuminate and image. Oil and gas companies required better imaging to operate more successfully.

In response, CGG worked with clients who agreed that step-changes in seismic could further reduce risks and enable better evaluation of opportunities. The ambition was to develop a new seismic solution designed to specifically address the challenges of the Gulf of Mexico, and in 2009, a team comprising operators and a service company began planning how to achieve this goal.

Multiple acquisition configurations were designed, tested, and evaluated for illumination, cost-effectiveness, and subsurface imaging potential. One design went to final proposal before being determined unable to meet all the criteria. This collaborative approach, considering every aspect of the solution from multiple points of view, ultimately led to the full-azimuth, ultra-long offset, broadband seismic solution of StagSeis. Once final modeling by both CGG and client partners validated the design, it was commercialized and acquisition commenced in 2012.

The areal spread of StagSeis was larger than any seismic acquisition configuration previously undertaken, forming what was believed to be the largest moving system on earth at the time, roughly equivalent to the area of Manhattan Island. Multiple vessels operated in a staggered formation to deliver full azimuths to 10 km (6 mi) and ultra-long inline offsets to 18 km (11 mi) on four azimuths. BroadSeis broadband technology was also employed to provide bandwidth down to 2.5 Hz.

The volume of data generated by StagSeis was massive; each vessel acquired the approximate equivalent of all the books in the Library of Congress every week. In total, this added up to over 1.5 Petabytes, and four copies of this data were received from the vessels during acquisition.

This full-azimuth, ultra-long offset, broadband survey contained new data for subsurface imaging, which meant that many new algorithms had to be created to maximize their benefits, while others had to be optimized to handle the data volume.

The collaboration undertaken in this project proved critical. Since the final full-azimuth solution used vessels with linear tow that delivered consistent regular fold and azimuth distribution in each processing bin, CGG’s Subsurface Imaging team was able to deliver Fast-Trax results from a priority area three months after commencement of acquisition. Even at this stage, results showed considerable improvements, confirming that the new technique would indeed deliver the quality required.

The outcome of the project was the delivery of a multi-year, three-survey multi-client seismic program covering 871 offshore blocks in the GoM over Garden Banks, Keathley Canyon, Walker Ridge, and Green Canyon. Final images of the first and second surveys in the program, IBALT and DEUX, are now available, and those from the third, TROIS, are due later this year.

The final images show great improvements in clarity and detail. At the reservoir level, the image shows structure that was not previously visible, with improved continuity of subsalt horizons and better fault definition. In the shallow section, it is also possible to define potential geohazards better.

The success of this project shows that a collaborative approach and tailor-made solution is an excellent way to overcome operators’ key challenges. By understanding the specific challenges clients faced, the surveys could be designed to meet their needs. This solution provides enhanced geological definition of the subsurface, from overburden to the previously obscured subsalt reservoirs. With the high costs and risks of deepwater operations in the Gulf of Mexico, such imaging is key to continuing its exploration.