Operators in the Gulf of Mexico (GoM) are increasingly looking to ultra-deepwater (>5,000-ft/1,524-m water depth) fields and more challenging reservoirs to deliver the hydrocarbons that the energy market demands and to satisfy their production growth objectives. DNV GL was granted an award by the Research Partnership to Secure Energy for America, partially funded by the US Department of Energy's National Energy Technology Laboratory, to manage a project to develop dry tree semi concepts for the ultra-deepwater fields in the GoM. 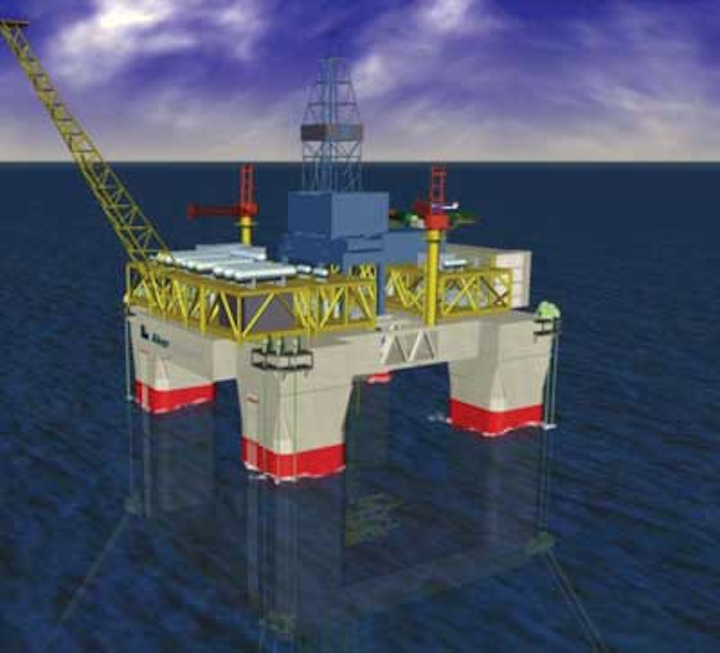 RPSEA selected two awardees (KFD and HOE) for this study, each with its own unique hull form. Each awardee was tasked with providing a hull form and associated riser tensioning systems, while making use of conventional technologies to the extent possible. The work requires performing pre-front-end engineering and design (pre-FEED), equivalent engineering, and cost estimates. RPSEA also selected DNV GL to manage the project and to act as an independent third-party verifier for assessing the maturity of all safety and environmentally critical aspects of the concepts.

For the HOE concept, the following key issues were addressed:

For the Kvaerner concept, the following key issues were addressed:

HOE and KFD further developed their dry tree semi concepts based on the scope defined in the proposal. The working project group (WPG) was established at the very beginning of the project. The WPG consists of subject matter specialists from the industry and DNV GL as well as the RPSEA project manager. Periodic WPG meetings have been arranged by DNV GL to review progress and seek input from subject matter specialists.

DNV GL used AiP as an approach to evaluate the overall concept feasibility. AiP is a typical process used for a class project to assess early conceptual feasibility. For this project, some design aspects that are beyond typical class scope but considered to be critical for dry tree semi concept (e.g. quayside integration) were also included in the evaluation. DNV GL also used its technology qualification (TQ) process for the riser tensioner qualification. Details of the AiP and TQ processes are described below.

AiP is a structured process used by DNV GL to carry out an independent assessment of a concept within an agreed requirement framework. The aim of the AiP assessment is to confirm that the design is feasible and that there are no insurmountable obstacles ("showstoppers") that would prevent the concept being realized. AiP is particularly useful to assess novel designs which will not be adequately addressed by existing recognized codes and standards.

The AiP approach is a risk-based approach, which is considered to be the most effective means of identifying and addressing hazards associated with a novel concept. Such hazards may arise from use of novel technology (or operation), from a novel application of existing technology and from an interface between novel and existing technology.

Identifying these areas is a key part of the AiP process, which is, initially, intuitive and, subsequently, part of a structured iterative process. Having identified hazards (or critical elements) to be further addressed, the AiP process will assess how the designer has addressed these concerns. Typically the designer will carry out risk and engineering studies to document the probability and consequence associated with the hazards and the effects of mitigation measures proposed.

The AiP process will review documentation produced in the risk assessment, will confirm that all considered risks have been adequately addressed, and that mitigation measures are considered appropriate. Compliance with relevant prescriptive requirements will also be considered. Depending on the design concept and its intended application, it may also be appropriate to consider any regulatory barriers which might impact the design. In addition, actions to be taken toward full classification will be listed.

As part of AiP process, conceptual HAZID workshop(s) should be held with subject specialists and the designers. Unlike a typical design HAZID, this conceptual HAZID is similar to a peer review workshop, which identifies potential challenges and risks of a concept. This would typically involve qualified personnel from DNV GL who would facilitate the workshop, together with a team of designer's specialists, industry subject matter specialists, and DNV GL specialists with experience in the design and intended operations.

This workshop would focus on critical design elements and systematically discuss the potential risks of the design concept. The intention is to identify potential showstoppers, identify design novelties (new technology or new application of existing technology), systematically assess "what if" scenarios of the identified elements to evaluate potential failure mechanism and consequences of failure, discuss mitigations/improvements, and thereafter determine the feasibility of the concept.

The TQ process is defined as a "Qualification Procedure for New Technology." It is a procedure developed as part of the DEMO 2000 project funded by the Research Council of Norway. The Recommended Practice was developed to cover the need for a systematic approach to qualify new technology and ensure that the technology functions reliably within specified limits.

DNV GL, in close collaboration with the WPG group, performed a comparison of the original design basis used by each designer. Some discrepancies and ambiguities were found, e.g. metocean data, acceptance criteria, etc. Some comments were raised on living quarter capacity, SCR configurations, etc. As an example, the definition in the original design basis did not seem to be practical for a safe operation in the GoM. Based on the above findings and comments received, updates were made to the design basis in order to develop the concepts for safer operations in the GoM. These updates resulted in additional design iterations and some extra engineering work.