With the huge investments required before there is any flow of hydrocarbons from an offshore well, keeping production levels at optimum rates for as long as possible is a necessity. 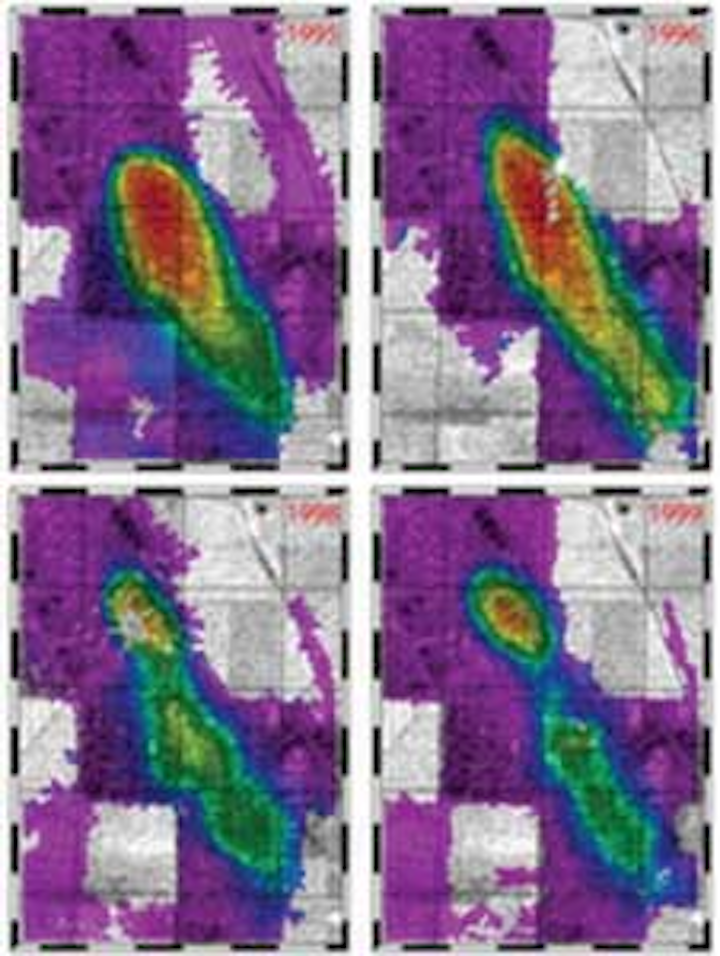 With the huge investments required before there is any flow of hydrocarbons from an offshore well, keeping production levels at optimum rates for as long as possible is a necessity. The challenge of reservoir "sustainability" was partially met with flow-predicting software and on-site monitoring tools. When flow rates drop, the injection of fluids often can boost production. But there is more to the puzzle than how fast the oil or gas comes out, and for how long.

As petroleum is pumped from its original bed, subsidence and compaction of the soils surrounding the reservoir can affect rock permeability, the integrity of boreholes, equipment function, and even the geology around the production sites.

Extraction of petroleum from an underground reservoir leads to pore fluid pressure reduction within that reservoir. That results in a redistribution of stress in the rock formation. Since rock deformations are often plastic, this produces subsidence of the ground around the reservoir, and that expands over time as extraction continues. As the rock deforms, the permeability of the rock itself changes, which then affects the flow of fluid within the reservoir. The phenomena of fluid flow and mechanical deformations are thus inexorably coupled to each other.

Reservoir compaction has been investigated extensively to determine its impact on both hydrocarbon field production and environmental stability. The effects can be cumulative. For example, in the Netherlands, subsidence at the large Groningen gas field, though only on the order of 10s of centimeters to date, poses significant long-term challenges since large portions of the Netherlands are below sea level and protected by dikes.

Some important, much-documented lessons from the past clearly demonstrate the negative impact of the phenomenon over time. Long Beach, California, experienced subsidence of some 20 sq mi (52 sq km) of land, with a surface dip of 29 ft (9 m) near the center, due to extraction from the huge Wilmington oil field. Subsidence from the Goose Creek oil field in Texas affected over 4 sq mi (10 sq km), with up to 5 ft (1.5 m) of surface drop. Remediation in both cases cost millions of dollars. Offshore, the Ekofisk field in the North Sea suffered seafloor subsidence that required highly expensive interventions to re-establish the safety of the producing platforms.

While most oil and gas projects do not encounter challenges at such a large scale, petroleum engineers now understand the value of starting with deeper knowledge of the terrain at the earliest stages of reservoir development.

Getting a better view

As an integrated energy company operating in engineering, construction, and drilling both offshore and onshore around the world, Italy's Eni S.p.A. devotes considerable manpower and resources to research into reservoir management. The work helps close to home, too – gas fields in the Adriatic Sea are a major source of energy for the country. Due to the morphology of the shoreline, it is paramount for Eni to correctly predict the land subsidence that may be induced by hydrocarbon production in order to guarantee the sustainable development of the offshore fields.

Eni has been developing methods to study reservoir subsidence and compaction with the help of Abaqus finite element analysis (FEA), from Dassault Systèmes' SIMULIA brand. Abaqus is the main stress/strain simulator for studying the geomechanical behavior of reservoirs at both field and well scale says Silvia Monaco, geomechanical engineer in the petroleum engineering department of Eni E&P headquarters in San Donato, Milan, Italy.

The ability of FEA to simulate realistically complex structural and material behavior suits it to the task. Although the study of subsidence in petroleum fields has been slowly advancing since the 1950s, earlier approaches assumed homogeneity of the whole system, i.e. they described the side-, over-, and under-burdens of rock and soil with mechanical properties identical to those of the reservoir. But soil and rock are in fact very non-homogeneous, and show highly nonlinear behavior strongly influenced by previous stress paths.

Incorporating FEA into a computer model of a reservoir provides a more realistic simulation of this truth. Different types of finite elements, a large variety of material properties, coarser or finer element meshes, and data-based boundary conditions all can be woven into a prediction that more accurately reflects the full effects of the geomechanical complexities unfolding beneath the surface.

The start of oil or gas flow out of the reservoir gives rise to the effects that FEA models anticipate. So Eni group links its FEA models to the ECLIPSE flow simulator from Schlumberger. Fluid-flow analysis is essential to forecast production and manage field development, but the geomechanical processes at work in the rock, and the fluid contained in its pore space, are also of primary interest since they can affect the behavior of the reservoir itself. Transferring pore pressure depletion data from the simulator into FEA gives a better understanding of the mechanisms involved in surface subsidence in order to forecast and prevent well failures and adverse environmental impact.

Running a computer model of the large-scale dynamics of an entire oilfield is becoming more efficient, thanks to leaps in parallel processing and high-performance computing that can handle FEA models with millions of degrees of freedom (DOF). For Eni, creating that kind of model recently became easier.

When Eni first began coupling FEA with ECLIPSE models several years ago, considerable effort went into creating the complex workflow needed to produce simulations that behaved realistically and correlated well with real-world measurements. There were a number of non-automated procedures and simplifications related to the geometry description, such as the smearing of faults and simplified treatment of collapsing layers. Even so, it used to take almost two months to complete a single model suitable for running.

To streamline this process, Eni teamed with SIMULIA in a two-year R&D collaboration. The companies developed new features in Abaqus that change the approach to geomechanical reservoir simulation by allowing a completely automated workflow. Now a geomechanical model can be built in four weeks. Time required to set up an analysis also is reduced, and interactive solver utilization reduces computation time and lowers memory use to further speed execution.

The new workflow automates the transfer of data from the simulator into Abaqus and speeds the subsequent FEA model set-up, expanding the flow-centric view of a field-scale reservoir into a much richer 3D profile of flow-plus-subsidence over time.

To do this, a translator establishes a link between ECLIPSE and Abaqus. All information from the reservoir model (grid, properties, and pressure) is populated automatically into the FEA model in the form of data that can be used for the geomechanical analysis.

For example, ECLIPSE cells are designated either as gas, oil, or water according to the percentage of fluid saturation each holds; in the FEA model the elements automatically derived from these cells can be assigned as many as 300 different material property definitions.

The simulator's pressure history descriptions are also translated into FEA pore pressure values. These values are essential for calculating the change in the effective stress in the reservoir. Abaqus meshing tools automatically adjust the elements and nodes, and perform upscaling, a process that condenses the size of the FEA model by merging horizontal rows of elements while maintaining the vertical zones (where drill data has already been collected), which are more relevant to subsidence prediction.

Burden regions over, under, and to the sides of the oil reservoir are created in Abaqus to extend the analysis to the terrain beyond the reservoir as the petroleum is pumped out.

Once the model is set up, results from an initial elastic run are used to update the plasticity values (since rock behavior is elasto-plastic) to make the models more realistic. The simulations are then run over time increments so predictions can extend over many years.

This is a logical scheme to automatically execute all the steps required to create and run geomechanical models. This improves efficiency in terms of user time in the preprocessing stage, and the results are measurably more precise.

Such precision helps Eni develop strategies for sustainable oil and gas production. The increased quality of the new FEA results allows for a more accurate and predictive environmental analysis. This is a key for sustainable development of Italy's hydrocarbon reservoirs. Moreover, as a result of the computational time reduction, more studies can be performed which strengthens the link between geomechanics and geological/reservoir model construction.

Eni plans to turn its attention to a comprehensive integration of the huge quantities of deformation measurements acquired at different scales and in different ways. The automatic calibration of the rock properties of a geomechanical model will allow this.

Lynn Manning is a science and technology writer based in Providence, Rhode Island.