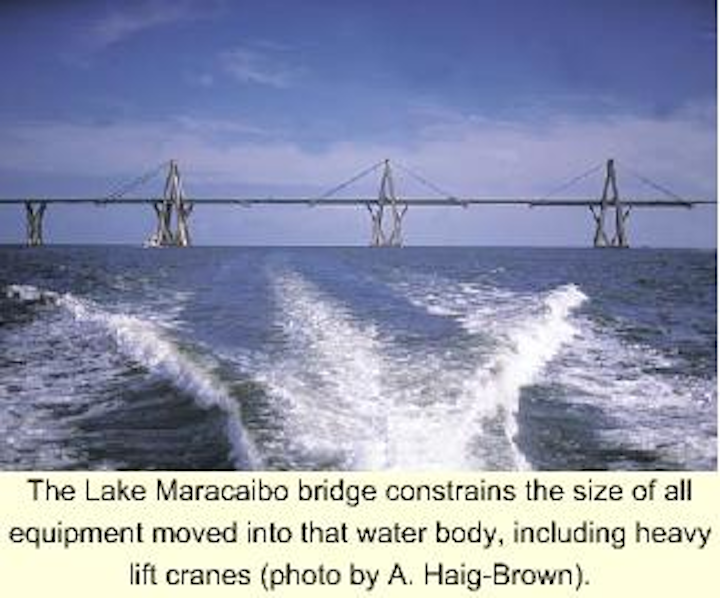 The tow out and successful installation of the huge LL652 central production platform (CPP) in Lake Maracaibo completed the largest lift of its type for both Crowley Maritime and subcontractors Versatruss and Global Industries.

A group of oil companies won the rights to regenerate the LL652 Field in Lake Maracaibo for the sum of $251 million. Chevron held 27%, and Statoil 27%, Arco 18%, Phillips 18%, and EPIC, the joint venture arm of PDVSA retained a 10% interest.

The field's two oil reservoirs were exhausting. Introducing both water and gas injection was considered the most practical way to extend the life of the field.

To do this required a major capital investment to provide both a water injection platform (WIP) and a gas compression platform (GCP) along with a central production platform (CPP). Transport and installation of these three platforms and two wellhead platforms was contracted to Crowley Maritime by Chevron, which is operating the completed facility.

While the two jackets and wellhead platforms were fabricated in Venezuela, the three larger platforms and their jackets were fabricated at various locations along the U.S. Gulf Coast and transported to Lake Maracaibo for installation.

A defining challenge to the project was presented by the Maracaibo bridge that spans the entrance to Lake Maracaibo from the Gulf of Venezuela and the Caribbean Sea. The span clearance offered only 44 meters vertical air gap, and entry to the lake by the largest cranes was not possible. "In the Gulf (of Mexico) we would have used a 6,000-ton derrick barge or two 3,000-ton derricks," explained Chevron's Fred Van Etten."

"Alternatives included building the structures in 500-ton modules, use of 'float-over' technology, or a system developed by Versatruss. For our deck design, piles-to-soil design and seismic criteria, we didn't feel the float-over installation technique was suitable."

In the spring of 1998, Crowley was selected for transportation, and Versatruss was selected for the installation. The entire LL652 project will represent an investment in the $650 million range, by the time oil is flowing in January 2000. "The overall price was competitive with the heavy lift option, depending on day rates," Van Etten pointed out. "We saved some time by parallel design and fabrication."

By the spring of 1999, construction at New Orleans, Morgan City, and on the Texas coast was reaching completion and the shipment south began. After an initial failure resulted in the loss of a piece of equipment at sea, a system was developed by Crowley that mounted the two smaller platforms - the 4,300-ton CPP and the 5,300-ton WIP, on two of Crowley's 400 ft by 100 ft ocean deck barges for the tow across the Caribbean.

At the insistence of the underwriters, the 5,900-ton GCP, which had been fabricated to 1,000 tons then lifted onto a 400 ft by 100 ft barge for completion, was taken from the Mississippi to Maracaibo on a heavy lift ship.

By August 1999, the three platforms on their barges, the two barges with the Versatruss systems, and various other hardware were marshaled in the Port of Maracaibo, just north of the low bridge. Out on the lake, Global Offshore International Ltd's 1,000-ton derrick barge Cherokee was used to drive 54-in. by 300 ft piles down through 64 ft water depth and 288 ft of seabed. Set on these pilings were the three 60 ft by 120 ft jackets for the platforms. Each consisted of six legs on 60-ft centers, in a design common to West African fields.

Some 30 miles northwest, at the Port of Maracaibo, the 5,300-ton WIP was the first platform to be readied for placement on the jackets. The two Versatruss barges were brought alongside the 400 ft by 100 ft transportation barge. Each barge supported three boom sets, with a 150-ton winch for each boom set, two 80-ton positioning winches, and various other operational equipment, including one control room with a computer system designed to synchronize the workings of all six winches involved in lifting and setting the platform.

Each boom of the Versatruss system consists of a triangle formed with the boom as a hypotenuse, and a massive pair of 12-sheave blocks, connected to a shackle, sling, and padeye as its base. The vertical height of the platform itself forms the triangles' third side. When the 2 1/4-in. winch hoist wires at the triangle's base are winched in, the triangle's base shortens increasing the angle of the booms, thereby lifting the platform.

The operation was a team effort between Crowley, Versatruss, Global, Chevron and various other subcontractors. Crowley's Lew Cascone and John Ara convened daily meetings to plan the next day's operations.

Jan Flores was Crowley's Senior Port Engineer for the project. With little to no tide that far south, Flores ballasted the transporting barges down to the lowest point to gain maximum air gap to clear the bridge. He also ballasted the barges down to put weight onto the Versatruss boom sets. "After the Versatruss was hooked up to the 5,900-ton CPP in the harbor, we had six ft of freeboard on the big barge. I ballasted it down to four ft, which put 4,000 tons of weight onto the Versatruss system for the tow-out. They picked up the final 2,000 tons on site."

The 400 ft by 100 ft barge has eight sets of three ballast tanks. With the CPP sitting on 120 ft of the barge's 400-ft length, it was important that the ballasting be balanced so as not to cause the barge to become unduly stressed. At the same time, the ballasting of the two smaller barges supporting the Versatruss systems was also balanced.

Lake Maracaibo, while free of long swells and powerful seas, is subject to Chubasco winds that can come up to 60 knots, with steep but low-power chop. On the second tow out with the GCP, a 30-knot wind with heavy rain came up and slowed progress by two hours. Although there were no concerns about the integrity of the tow, visibility through the obstruction-crowded field induced caution. The towouts, each taking about eight hours to cover the 38 miles from the port to the field, were each started at a time that would allow the tows to arrive at the field shortly after daylight.

Crowley Maritime's 7,200 hp Gladiator was the lead boat on the towout, with the 5,750 hp Sea Swift acting as tail boat. There were three assist vessels. - As the winches pull tighter, the system lifts the deck off the barge, allowing the deck to be moved over the jacket (photo by A. Haig-Brown).

On location, the barges were backed into place and made fast to existing structures with the 80-ton mooring winches. The lead boat moved to a buoyed anchor. Sea fasteners were removed in the final stages of the tow. The six boom-set winches were brought online and the computer-controlled synchronizing program began the lift. With each boom-set proof-tested to 7,000 tons, there was plenty of leeway.

Slowly, the horizontal assembly of wires and blocks shortened, increasing the base angle and the vertical elevation, bringing the tapered ends of the platform's six 54-in. diameter vertical members clear of their barge mates. With the platform now supported by the trusses, the 80-ton mooring winches slowly inched the assembly over the back of the barge and onto the waiting jacket.

Less than two hours after lifting off the barge, the platform was reset in working position. When, and if, a decision is made to deactivate the platform in the future, it can be removed in a similar process.