Statoil plans to boost recovery on the Gullfaks South field in the Norwegian North Sea by introducing subsea gas compression. 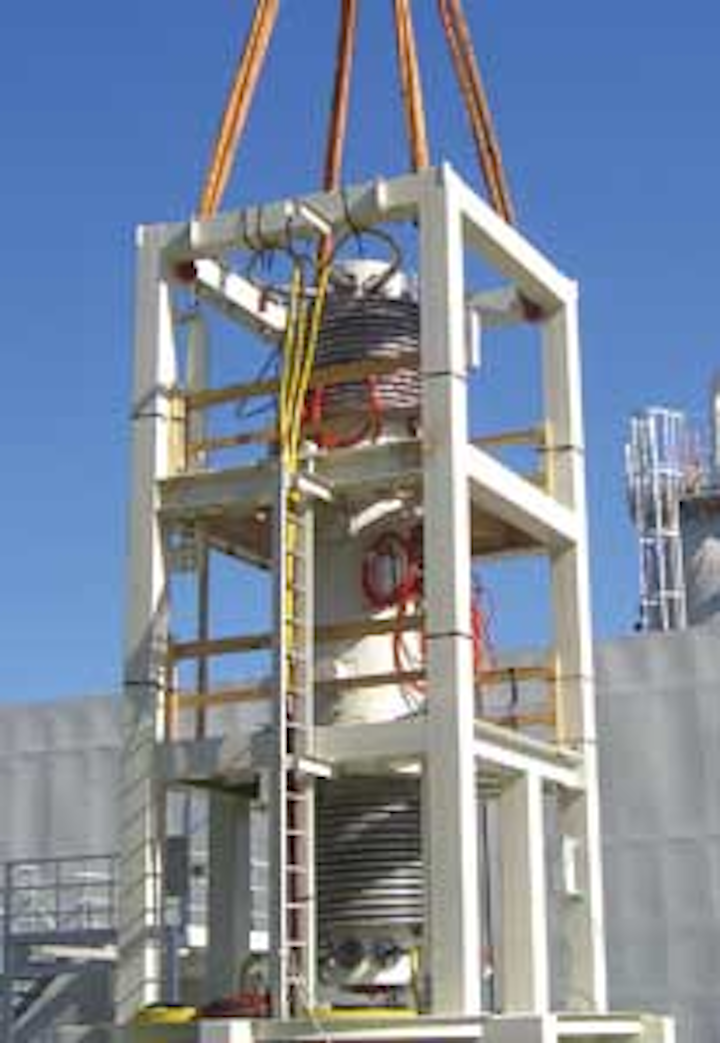 Equipment can be adapted for switch to low-pressure production

Statoil plans to boost recovery on the Gullfaks South field in the Norwegian North Sea by introducing subsea gas compression. The NOK 3-billion ($525-million) project involves the first use anywhere of a subsea wet gas compression system. That system will be supplied by Framo Engineering under an NOK 900-million ($160-million) EPC contract.

"Subsea gas compression represents an important leap forward in the efforts to improve recovery and extend the producing life of several gas fields," said Siri Espedal Kindem, senior vice president for technology, when the contract was announced in April. "Having implemented this technology, we are also one step closer to our ambition of moving processing facilities down on the seabed – in other words, a subsea factory."

Through a combination of subsea compression and low-pressure production, Statoil expects to produce an additional 3 bcm (106 bcf) of gas, equivalent to 22 MMboe, from the Gullfaks South Brent reservoir, in the process raising recovery from 62% to 74% - a high rate for a subsea field, the company points out.

The Gullfaks South project is one of two subsea compression projects which Statoil plans to bring into operation in the Norwegian sector in 2015 – the other facilities will be installed on the Åsgard field in the Norwegian Sea. Statoil is also a partner in the Ormen Lange subsea compression pilot project in the same sector, operated by Norske Shell; here it has acted as technical manager for the development up to the phase of performance testing which was still in progress in October.

Subsea gas compression is a major building block in the portfolio of technologies that Statoil is developing for its subsea factory, in which tasks such as oil and gas processing, separation, pumping, and compression will be carried out on the seabed rather than at the surface. Each of the three subsea compression projects presents different conditions and challenges, for which different technologies have been selected.

Gullfaks South is a smaller-scale application than the other projects. The required throughput is 10 MMcm/d (about 60,000 boe/d), compared with 21 MMcm/d (742 bcf/d) for Åsgard and an original target of 60 MMcm/d (2.1 bcf/d) for Ormen Lange, although this will be somewhat scaled back following a reconfiguration of the facilities. The power requirement is also much lower, at 10 MW compared with 25 MW for both Åsgard and the reconfigured Ormen Lange. The Gullfaks South water depth is relatively shallow, at 135 m (443 ft), unlike the deep waters of 860 m (6,102 ft) at Ormen Lange, though less so in the case of Åsgard's 270 m (886 ft). The step-out distances also vary considerably, from 15 km (9.3 mi) at Gullfaks South to Åsgard's 40 km (25 mi) and Ormen Lange's 125 km (78 mi).

A 2008 study for Gullfaks South with several suppliers led to the award of a technology development contract to Framo in 2009. The subsea solution was evaluated against a conventional topsides compression system set on the Gullfaks C platform some 15 km from the field. In 2011 the Gullfaks South partners concluded that a subsea solution was preferable to topsides compression. While the investment for the two options is about the same, the subsea alternative provides greater recovery as compression takes place much nearer the wellhead, according to Torstein Vinterstø, manager of Statoil's subsea compression portfolio. Moreover, the number of hours of offshore work for the platform option would be much higher, and scheduling it would be problematic due to the high level of platform work being performed for other purposes.

Framo has worked regularly with Statoil over the last two decades to develop subsea technology. Its deliveries include subsea booster pumps for the Lufeng 22-1 development offshore China in 1997 and multi-phase booster and injection pumps for the Tordis subsea separation and water injection system in the North Sea in 2005. But the Gullfaks South EPC contract represents its first delivery to Statoil as a systems provider.

"We saw the opportunity, technology-wise, to select the Framo design," said Vinterstø. "The volume of production on Gullfaks South is far less than on Åsgard, so the Framo technology fitted the scenario best."

Statoil has set a target of 97% availability for the system, which has a design life of 20 years. Delivery is due in spring 2015.

Gullfaks South consists of a series of reservoirs, some primarily containing oil and some gas. Production is through subsea wells housed on a series of seabed templates tied back to processing facilities on one of two platforms, A or C, on the main Gullfaks field.

The subsea compression station will be installed just downstream of the L and M templates, which tieback to Gullfaks C, from which the system will be powered and controlled. A further template, N, is tied back to L and M.

Contracts have been awarded to Nexans for the integrated subsea power cable and umbilical and to Apply Sørco for platform modifications and topside equipment installation. The final main contract, for marine operations, is expected to be awarded this autumn.

Framo, which is now wholly owned by Schlumberger, has long been engaged in developing the technology for subsea processing. It built its first wet gas compressor prototype in the late 1980s, and tested it at a Shell onshore field in 1990, according to Jon Arne Sværen, vice president for sales, marketing and business development. This led on to development of a 2-3 MW machine under Norway's Demo 2000 development and demonstration program. The equipment was tested at Statoil's K-lab at the site of the Kårstø gas processing plant in the early years of this century.

However, despite recognition in the industry of the potential benefits of subsea compression, Framo has had to wait for the market to catch up with the technology.

"The push for wet gas compression technology has really come in the last couple of years," says Sværen. "For us it's been very positive working with Statoil – they've shown a very good ability to engage in the development and be the first user, and their contributions have been very supportive."

For the Gullfaks South application, the company has developed a 5-MW compressor, which is driven by two 2.5-MW high-voltage motors. Two such compressors will be installed in the compressor station, providing total capacity of 10 MW.

Working in parallel, each compressor will boost the flow of the wellstream passing through it by 32 bar (464 psi). But the compressors can also be set up in series, in which case the pressure boost is 60 bar (870 psi). This will become relevant when the switch to low-pressure production takes place, through the reduction of the inlet pressure at the compressor, although timing has yet been decided. Low-pressure production opens the way to increased recovery, Vinterstø says.

The compressor station also houses a mixer, a module containing manifolding and process piping, two coolers, and a subsea power transformer which will step down the high-voltage power arriving from the surface, as well as control pods, chokes and valves. The equipment is housed within an integrated base frame/protection structure.

As a wet gas compressor, Framo's unit can handle the whole wellstream, including liquids. There is no scrubber or separator as on the Åsgard and Ormen Lange subsea compression stations. Instead, the wellstream is homogenized by passing through the mixer. It is also put through one of the coolers, each of them located upstream of one of the compressor units.

Cooling increases the density of the gas, which in turn allows for more efficient compression. It also ensures that the temperature of the gas, which is raised by the compression process, does not increase to a level in excess of the pipeline design specifications. The coolers, which are Framo designed and built, are based on the conventional tube and shell principle, but without a shell, so that the vertical gas pipes are directly exposed to the water.

The vertically mounted compressors consist of two counter-rotating compressor bundles. They are designed to operate at relatively slow speeds, up to 4,500 rpm, which makes them mechanically robust compared with high-speed compressors, says Sværen.

The wet gas compressor is very liquid tolerant, although in the case of the Gullfaks South gas, the liquid content is very low. As an axial machine, its inherent hydraulic design is forgiving for particles such as sand which are to be found in the wellstream. When developing the pumps used in Statoil's Tordis subsea separation and water injection system, Framo performed substantial testing with sand on the basis of which it developed models and materials knowledge applied for the design of the Gullfaks South system.

A comprehensive test program qualified the compression technology, which involved running the test compressor unit under a range of conditions for a total of 6,000 hr. at Framo's former underwater test loop at Fusa near Bergen, Norway. The program used natural gas with similar properties to the Gullfaks South gas.

Though a final decision has yet to be taken on the installation strategy, Statoil's base case is to install the station in modular form. "The final solution will be selected when we have seen what the suppliers can offer," Vinterstø says. In the event of maintenance or malfunction, the system has been designed so each compressor and each cooler can be retrieved separately.

The topside equipment consists primarily of the variable-speed drives, a hydraulic package for operation of the subsea valves, and a hydraulic barrier fluid package. The equipment will be installed at different places on the topsides, rather than gathered in a module.

Wet gas compression technology could be the solution to increased recovery on small and medium-sized fields, according to Vinterstø. With many of Statoil's Norwegian fields now well advanced in their production life, there are several candidates for subsea compression, and screening is under way to identify those which would benefit most from the technology.

It could also be applied from day one, and could make otherwise uneconomic developments viable.

"A lot of licensees are sitting on the fence to see if we succeed," says Vinterstø. "Success on Gullfaks South will give a big boost to the use of subsea compression."

Meanwhile Framo is confident that the potential application of its wet gas compression technology can be significantly expanded – it has already established that the power rating can be raised to 8 MW, says Sværen.