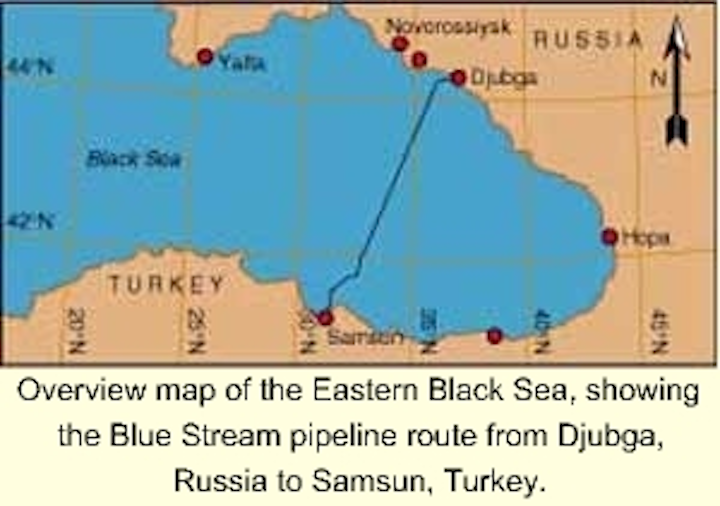 Editor's Note: This article is a summary of "Survey Operations for the Blue Stream Project" (OTC 12071) presented by Brian Beard and Christian Tobias of NeSA B.V. at the 2000 Offshore Technology Conference in Houston, Texas, May 1-4, 2000. This summary appears with permission.

At the request of PeterGaz, NeSA per-formed a detailed geophysical survey with a remotely operated vehicle (ROV) along a 380-km long proposed pipeline route crossing the Black Sea from Djubga (Russia) to Samsun (Turkey) in water depths up to 2,150 meters. This survey was known as Step 2 of Gazprom's Blue Stream Project Phase II. The survey was conducted in cooperation with the ROV company Canyon Offshore and vessel owner Diamar. The Italian DP-vessel Mare Oceano was used for the data acquisition during the period May 15 to Sept-ember 19, 1998.

Phase I of the Blue Stream Project revealed that pipelines could be installed insofar as pipeline stress criteria were not exceeded. The review of the Phase I survey results indicated the following potential geohazards:

In order to achieve these objectives, a high-resolution multibeam echosounder, side scan sonar, and Chirp sub-bottom profiler were mounted on an ROV to reduce the water column height between the sensors and the seabed. This resulted in increased data accuracy and density, as well as provision of visual inspection capabilities.

The proposed route alignment was defined within a nominal 1,000-meter wide corridor, reduced to individual route options of a minimum 400-meter width at the approach of the Russian continental shelf. During the Phase II Step 1 survey, detailed bathymetry and geophysical surveys were performed on the Russian and Turkish continental shelf areas, using vessel mounted multibeam echosounder and towed side scan sonar and sub-bottom profiler. During the Phase II Step 2 survey, detailed ROV surveys were performed in the critical sections across the Russian and Turkish continental slopes and at discrete locations over the abyssal plain.

The navigation, bathymetry, and geophysical data were processed and interpreted immediately onboard the Mare Oceano to allow adjustments in the survey lineation in case inaccessible or hazardous terrain was detected for pipelines. Final interpretation and charting of the bathymetry and physical data along the pipeline routes was performed by NeSA in their office in Rotterdam, The Netherlands.

The geomorphology observed along the Blue Stream pipeline route can be divided into seven distinct provinces:

The above-mentioned seabed geomorphology was surveyed in detail during Phase II Step 2 of the Blue Stream Project.

The reliability and repeatability of the sensors employed in the survey is demonstrated by the fact that the ROV survey consisted of 2,313 underwater hours over a range of depths from 100 meters to 2,150 meters, during which the system sensors had no breakdowns. The techniques employed also show that the three vital sensors necessary for geohazard surveys - multibeam, sub bottom profiler, and side scan sonar - can all be acquired simultaneously from an ROV at these water depths.

For deepwater work, special attention should be paid to the complete survey system integration. Using Doppler data effectively is critical to the accuracy of surveys of this nature. The teams of multi-talented personnel were essential to the project's success.