In 1999 INTECSEA, began a front-end engineering and design study for the West Delta Deep Marine concession offshore Egypt in the Mediterranean Sea. The development was operated by the Burullus Gas Co., a joint venture among BG, state-owned EGPC, and Edison Gas, with the latter since replaced by Petronas Carigali. INTECSEA has continued to work with Burullus on subsequent phases of the development, which has been expanded farther from shore at 105 km (65 mi), and in deeper water to 1,024 m (3,359 ft). 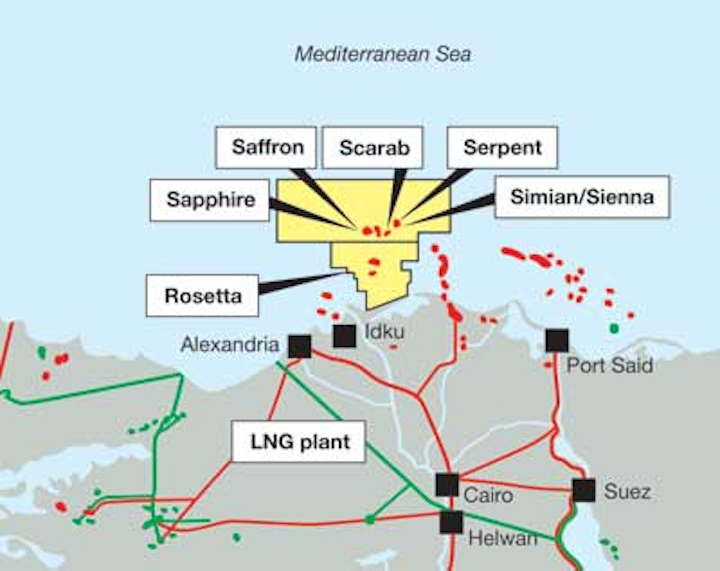 In 1999 INTECSEA (then INTEC) began a front-end engineering and design (FEED) study for theWest Delta Deep Marine (WDDM) concession offshore Egypt in the Mediterranean Sea. The development was operated by the Burullus Gas Co., a joint venture among BG, state-owned EGPC, and Edison Gas, with the latter since replaced by Petronas Carigali.

This was the first deepwater development offshore Egypt, and there was little associated infrastructure to draw on at the time. The project was also pioneering as one of the longest tiebacks to shore at 90 km (56 mi), taking in the Scarab/Saffron fields via eight subsea wells and two manifolds.

INTECSEA has continued to work with Burullus on subsequent phases of the development, which has been expanded farther from shore at 105 km (65 mi), and in deeper water to 1,024 m (3,359 ft). Various services have been introduced, such as subsea electrical power, to allow expansion beyond the originally planned capacity of three hubs, each with a maximum of 12 wells, and three manifolds, to currently more than 50 wells and 12 manifolds. Further expansion is planned, including the current Phase IXa, adding potentially another 20 wells with associated manifolds.

Produced gas from the WDDM fields is sweet but the pressures and temperatures are such that there is a continual risk of hydrates from the produced water. Continuous MEG injection, complete with corrosion inhibitor, is necessary and it is achieved through dedicated flow lines from the terminal to each field center. In addition, methanol injection is required at start‐up and shutdown. Depending on the development phase, chemical injection facilities are either located onshore or on a dedicated controls platform 62 km (38.5 mi) from shore.

The Sapphire field also produces a significant amount of condensate that must be extracted prior to the gas entering Egypt's National Transmission System (NTS) or the adjacent LNG plant.

The subsea pipelines are made of carbon steel with diameters ranging from 10-in. for well flowlines to 20-in. and 26-in. for infield pipelines. A pipeline end termination (PLET) is integrated to each flowline end, and includes a Cameron Vertical Connection (CVC) interface. There is provision for the flowline to slide longitudinally on the PLET foundation to allow temperature expansion and to avoid locked‐in forces that could result in flowline buckling. The infield flowlines eventually terminate at the pipeline end manifold (PLEM), where the pipeline diameters increase to 24-in. and 36-in. to provide the required export capacity to the onshore plant.

Subsea equipment includes horizontal trees, manifolds, and a remote pipeline connection system. Subsea christmas trees are the horizontal type with the flowloop connector hub mounted directly on the tree body. Remotely installed tie‐in jumper spools connect the trees to the manifolds which, like the christmas trees, are designed to suit the CVC system.

Fishing activity may occur in water depths down to roughly 200 m (656 ft), so the larger pipelines are designed for fishing gear pullover loads while the 4‐in. lines and umbilicals are trenched up to this water depth. Subsea structures in the shallower waters are designed to be overtrawlable, while in deeper waters the structures are upright. From Phase IX the requirement to protect the subsea equipment from damage has increased to 400 m (1,312 ft) water depth.

Under Phase 1, the Scarab/Saffron fields were the first to be developed via a total of eight wells connected to two production manifolds and controlled directly from the shore terminal at a distance of around 90 km (56 mi). Both fields came onstream in 2003 at around 700 MMcf./d. Twin 20-in. main export pipelines commence at a water depth of 415 m (1,361 ft) and extend for 30 km (18.6 mi) to the PLEM at a depth of 95 m (311 ft), where 24-in. and 36-in. export lines transports production to the shore terminal. A 4-in. pipeline conveys MEG from shore to the fields for hydrate inhibition via direct injection at the trees.

The Simian/Sienna (Phase II) and Sapphire (Phase III) field developments were the first expansions to provide gas to a new onshore LNG plant, with six wells at Simian, two at Sienna, and eight at Sapphire. Flows from these fields come together at the PLEM where the gas is commingled into the export pipelines to shore. The Simian wells are capable of a maximum throughput of 150 MMcf/d. All the subsea wells, in water depths beyond 1,000 m (3,281 ft), are controlled from shore through an electro-hydraulic multiplexed system, with controls, hydraulic power, and methanol injection equipment mounted on a controls platform in shallower water close to the PLEM.

Phase IV involved a seven-well and two-manifold expansion centered on the Scarab/Saffron production hub. This was followed by an investment in booster compression (Phase V) and the Phase VI Sequoia reservoir development, which comprised three wells on Sequoia North in the western flank of the Sapphire area and three more on the Sequoia South area, routed to the existing subsea Rosetta infrastructure and control room facilities.

Further pipeline capacity and main compression were added under Phase VII, at which point the continued development of WDDM required new wells to access additional reserves. Phase VIII was split into two phases, the first adding five wells and two manifolds to the Sapphire field and four wells and a single manifold to the Scarab/Saffron area. The second part added another well to the Scarab area, connected to the previously installed M6 manifold, and five wells and a manifold within the Simian area, linking three wells to the M2 manifold, with the remaining two wells "daisy chained" and connected to the remaining slot on the M1 manifold. The W37 well had an initial wellhead pressure that exceeded the rating of the Simian area pipeline and therefore was equipped with a high integrity pressure protection system (HIPPS).