A new semisubmersible heavy-lift vessel will soon be available that is expected to redefine the limits of heavy marine transport. 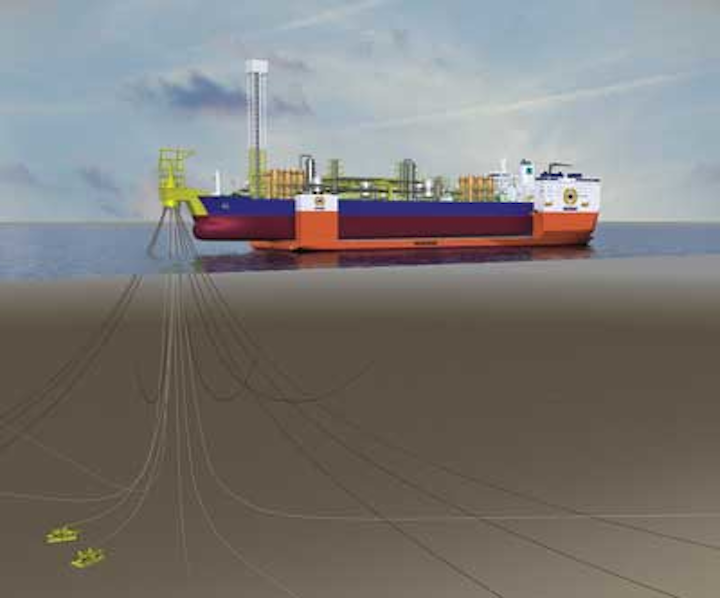 The next decade is expected to see growing demand for transportation and installation projects, particularly for the transport of mega units to remote offshore locations. Today, fully integrated offshore units such as TLPs and semisubmersibles are currently transported separately. Other units, such as spar buoys and FPSOs, can only be transported up to a certain size and are usually wet-towed to their destination.

Existing semisubmersible heavy-lift vessels cannot transport the next generation of platforms. The world's current largest semisubmersible heavy-lift vessel, theBlue Marlin (also owned by Dockwise), can carry structures of up to 76,000 metric tons (83,775 tons). While capable of transporting some mega structures (such as BP's Thunder Horse), the Blue Marlin is limited in its ability to transport larger and heavier units. Many of these newer units require a new type of vessel with a significantly increased carrying capacity. In light of current limitations, Dockwise decided to invest in a completely new vessel design to transport the super-sized offshore structures.

The vessel was engineered to surpass current heavy marine transport limitations. The vessel's deck covers a surface of 275 m x 70 m (902 ft x 230 ft) and is equipped with movable casings. In addition, the accommodation block and navigation bridge are on the extreme starboard side. The vessel has no bow, and this, along with other design features, gives the vessel a unique appearance.

In addition, the vessel has a dedicated design for ultra heavy units weighing up to 110,000 metric tons (121, 254 tons). Optimized deck strength and extreme wide-load capabilities are at the heart of the design philosophy, as are the vessel's stability characteristics. It is equipped with a 27 MW redundant propulsion system consisting of two fixed propellers at the aft and two retractable azimuth thrusters at the bow. It can reach a maximum transit speed of 14 knots, which translates to average service speeds of 11-13 knots with cargo. In addition, the vessel allows for 16 m (53 ft) water above deck, accommodating cargoes with a higher draft.

The vessel's capabilities present new opportunities previously unthinkable. Companies in the oil and gas industry can now specify much larger and heavier offshore structures, and these can be integrated at a single fabrication site. These mega structures can then be transported onboard the vessel to remote offshore locations, even in harsh climates where no commissioning facilities are available. This can help reduce costs and optimize the overall project. In essence, the new vessel will play an important role in the field development philosophy of oil and gas majors, since it will be capable of transporting fully integrated mega offshore units.

The vessel's design is also expected to help operators and developers create value. With its capabilities, timely and risky phases of offshore projects can be managed prior to hookup and commissioning. Interface optimization, higher degree of risk mitigation, lower insurance premiums, improved schedule flexibility, and reduced time-to-production – as well as reduced offshore man-hours – are a few examples of opportunities. In addition, the vessel's advanced technical capabilities enable it to offer a completely new service: offshore dry-docking.

Increasingly, FPSOs are being located in remote areas which lack support infrastructure. In this circumstance, an offshore dry-docking service can be specially valuable. The vessel's FPSO dry-docking capacity offers inspection, maintenance, and repair opportunities (amongst others) at different conditional modes. The FPSO could remain connected to its mooring and turret system while keeping the riser systems intact, with the possibility of continuing limited production. In this scenario, the FPSO will still be able to freely weathervane around the turret mooring, with controlled heading made possible by the vessel's propulsion system.

In order to fully realize this new offshore service, Dockwise received an "approval in principle" from ABS following the commissioning of a hazard identification (HAZID) safety assessment. This assessment took place in the presence of a multi-disciplinary team of experts and representatives from two oil and gas majors.

The vessel's design philosophy has received two awards by maritime organizations. The first award was from the Royal Association of Dutch Ship Owners for the KVNR Shipping Award 2011. This award recognized theDockwise Vanguard as the most innovative vessel, and was listed in the jury report under the "big, bigger, biggest" category. The second recognition, an OTC Spotlight on New Technology Award bestowed at this year's conference, also recognized the vessel's innovative design. In selecting a new technology winner, the jury's decision was based on the following criteria: new, innovative, proven, broad interest, and significant impact.

Looking to the future

With its innovative designs, the vessel is uniquely capable of transporting the next generation of fully integrated mega units offshore. Delivery of the vessel is planned for 4Q 2012.