As submarine gas pipelines are installed in ever-deeper waters, the challenge of pre-commissioning becomes more complex. 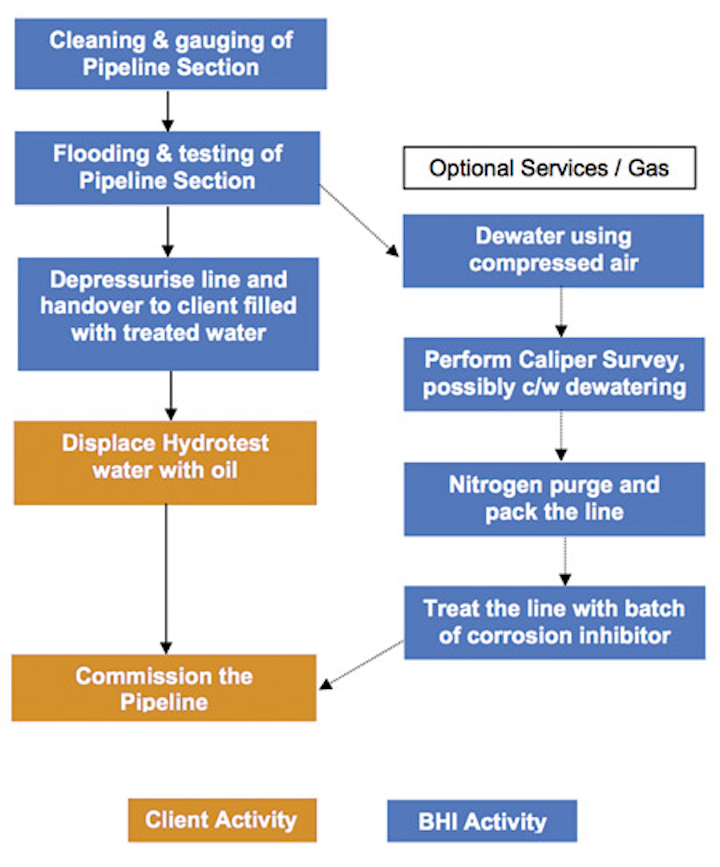 System can be applied for contingency dewatering

However, there remain many situations where it is necessary to connect from the surface to the deepwater pipeline, thus forming a reliable conduit to the pipeline that facilitates the injection of water, air, nitrogen, and mono-ethylene glycol (MEG); or even to be used for subsea depressurization.

The goal here is to demonstrate what can be achieved on major subsea pipeline pre-commissioning projects through the selection of the best equipment and techniques.

A down-line is best described as a conduit between a marine vessel at the surface and a subsea pipeline connection. For our purposes here, we will consider only the use of down-lines for pipeline pre-commissioning.

Where the pipeline has one or both terminations subsea, then a down-line may be required to perform the pre-commissioning service.

The following key attributes are desired from a down-line system:

• Be able to convey the pre-commissioning fluids (water, air, glycol, nitrogen) from the surface to the subsea injection point at the highest possible rate to achieve the pigging parameters agreed for the project

• Be robust and reliable

• Include contingency for critical items

• Be self-supporting during deployment and recovery

• Have fast deployment and recovery rates

• In many applications, be able to withstand the external hydrostatic pressure at the deepest point.

Traditional oilfield coiled tubing units have been used to make a connection between the surface spreads and subsea pipelines for many years. Typically, such units used coiled tubing of 2-in. outer diameter (OD) and below, with the oilfield design generally necessitating deployment via a moonpool equipped marine vessel.

The design brief for the customized system was as follows:

• Flexible frame to allow use on a wide variety of vessels, either through a moonpool or over the side.

Historically, the main use of the coiled tubing down-line has been as a conduit for supplying air or nitrogen to dewater the subsea pipelines. This also typically requires that MEG or another pipeline hydrate-inhibiting fluid be pumped as part of a conditioning pig train. To date, coiled tubing has been used in water depths of around 2,200 m (7,217 ft), but with exploration already taking place in water depths down to 3,000 m (9,842 ft), this was selected as the target water depth.

Initial evaluation of a number of deepwater pipeline projects indicated that compressed air injection rates in excess of 10,000 cf/min (283 cm/day) would be required, injected on to a down-line up to 3,000 m long.

Engineering for such scenarios showed that the 2-in. coiled tubing used to date is not large enough for these flow rates, with the high-pressure drop equating to surface pressures greater than could be achieved. Thus engineering focused on the two largest pipe sizes available:

• 27⁄8-in. pipe is readily available and there is considerable experience with this pipe in downhole applications.

• 3½-in. pipe is not widely used in downhole applications, as high flow rates are not typically required, but it is manufactured, and readily available. These larger pipe sizes have much lower pressure drop, and are better suited for these applications.

The rest of the equipment was mounted on a single skid for ease of transportation and lifting. This skid also provides the basis of the overboard deployment system. A trolley system was used, which allowed the pipe and ancillary equipment to be rigged up in-board of the vessel and then jacked out over the side of the vessel.

The primary driver for this was an "over-the-side" deployment scenario, but this would work just as well for a moonpool deployment. The skid accommodates the control cabin, the power pack, the gooseneck and all ancillary equipment in its transport mode. Prior to use, the control cabin was lifted off the skid and replaced by the tubing reel, which partially balanced the weight of the tubing when deployed over the side. The cabin can be located in a number of places around the skid within a 30-ft (9-m) radius of the power pack, giving flexibility depending on vessel layout. The main transport skid was 40-ft (12.2-m) long by 12-ft (3.65-m) wide, weighing approximately 80,000 lb; so although it is a permit load, it can be transported by conventional truck. The use of a spreader beam gives a single point DNV-certified lift for offshore lifting.

The power pack, injector, gooseneck, and control cabin were all effectively standard components. The reel was also standard in the way it functions, but the dimensions are unique to meet the criteria outlined above.

The main issue associated with deploying the coiled tubing as a down-line in deepwater environment is the impact of current on the coiled tubing string and the vessel movement. This impact results from wave action, which can cause fatigue in the pipe string. In downhole applications, high-cycle fatigue is not an issue, since the tubing is constrained by the well, but in open water this is not the case.

Historically, several projects have been carried out in the relatively benign environment of the Gulf of Mexico. The calm sea state and relatively weak currents have not caused any major issues with the coiled tubing, even in deployments lasting several weeks. However, in more aggressive sea states, this has the potential to impact the coiled tubing and limit its working life.

The first project in which these more extreme conditions were encountered required the project team to look at this in more detail. In order to assess this potential impact, extensive modeling was carried out to determine the effect of different conditions on the coiled tubing string and the entire jumper system across to the pipeline end termination.

Modeling was undertaken using OrcaFlex to look at deployment analysis, in-place analysis, and high-cycle fatigue. This software requires the following inputs in order to model the behavior of the coiled tubing:

Specific issues to be addressed as part of the analysis:

• Examine vortex-induced vibration and whether lock-in would occur

• Look at the likely tension and bending moments in the hose bundle and the breakaway coupling during the operation.

The initial static analysis of the system revealed that a bend stiffener was required. Without one, the current acting on the coiled tubing would cause an overbend in the string at the vessel interface. Various types of bend stiffeners were evaluated, and a steel tube of reducing wall thickness was agreed upon, which would limit the radius of curvature of the coil and allow progressively more bending of the coil over its length. With this in place, the bend of the coiled tubing is limited to a level below the allowable limits of stress utilization based on curvature and tension.

In many instances with the vessel in a fixed position, it is possible for the hose and bottom hole assembly (BHA) to be tensioned beyond their design limit. In order to prevent this, it is necessary to move the vessel such that the BHA remains within a given target area, so that the hose and breakaway connector are not overly stressed. Buoyancy and weights are attached to the hose bundle so that it remains in a lazy S shape during the operation, without undue tension or bending moments being applied to any of the components.

Vortex-induced vibration was found to be present in the initial analysis without the bend stiffener, but the use of the bend stiffener reduced this to the point where it was no longer an issue. Contact between the tubing and the side of the vessel is possible in high current scenarios; therefore, the vessel may have to be oriented accordingly to avoid this.

With the bend stiffener designed as described, the coil was analyzed for fatigue. As indicated earlier, high-cycle fatigue is a major concern in this application, given the constant movement of the vessel. In this particular instance, the coil was anticipated to be deployed for about 32 days continuously. For a single deployment, fatigue was not determined to be an issue in this case. However, it should be noted that in the case of multiple deployments, the coil is also subjected to low cycle fatigue each time it goes over the gooseneck. The combination of these two fatigue regimes requires further investigation to determine a probable ultimate fatigue life of the coil.

Many subsea pipelines employ some type of wet buckle contingency (WBC) dewatering system, however for large-bore, deepwater pipelines, the compressed air spread required to dewater the line is huge and the dewatering time very slow. For example, a major Black Sea pipeline project would have required a standby dewatering spread to be located in the vicinity of the subsea initiation head. To mitigate this contingency requirement, Baker Hughes developed a solution to partially dewater, isolate, and depressurize a short deepwater section using a large-bore coiled tubing down-line.

This technique is summarized as follows:

2. A wet buckle contingency flooding pig receiver/catching head is installed. The head is fitted with a large bore discharge port for air/water outlet during the WBC flooding operation.

4. The WBC flooding pig receiver is then recovered to the surface and a pipeline recovery tool is installed with a pre-loaded smart plug

6. Once function tested, the CT dewatering system is deployed to the recovery head

7. The smart plug is propelled about 3 km to 5 km (1.86 mi to 3.10 mi) into the line and treated water is discharged at the WBC pumping location. This can be conducted at a lower velocity than conventional dewatering.

8. The smart plug is set and the air pressure is bled down at the surface.

9. Lay barge recovers line to surface and pipelay can recommence.

10. The smart plug is left in place until dewatering operations commence after completion of pipelay.

With this technique, a project crew can then use the dewatering air pressure to equalize across the smart plug and then push it to the receiver as part of the dewatering train.

With this article, the authors have endeavored to demonstrate the following:

1. Down-lines play an important role in the pre-commissioning of deepwater pipelines

3. Custom marine coiled tubing systems provide the flexibility for moonpool or over-the-side deployment and are largely self-supporting once installed.

4. Engineering and modeling is required prior to deploying coiled tubing in a blue-water environment.

Acknowledgment
Based on a paper presented at the OPT conference in Amsterdam, The Netherlands, Feb. 25-26, 2015.