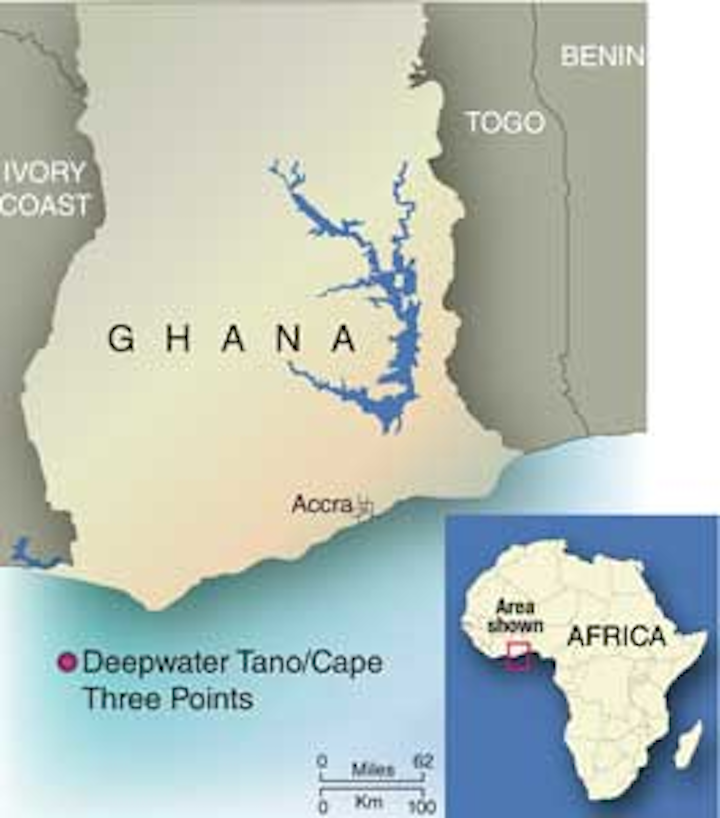 ExxonMobil has issued the first major contracts for the Hebron field development, 350 km (217 mi) offshore St. John's, Newfoundland. WorleyParsons, which previously performed front end engineering and design, will provide overall project management with Fluor under a $360-million, five-year EPC contract. Kiewit-Kvaerner Contractors will engineer and construct the gravity base structure for the production platform, which will be installed in 95 m (311 ft) water depth.

BG has contracted McDermott International for two new living quarter modules for platforms in the North Coast Marine Area block offshore Trinidad. These will provide accommodation for over 122 personnel on the Hibiscus and Poinsettia platforms – one of the modules will also incorporate power generation and distribution equipment. McDermott is building both structures in Morgan City, Louisiana, and will use the derrick bargeDB50 for the installations.

Petrobras found oil in presalt carbonates in the Dolomita Sul structure in the Santos basin. The well was drilled in 1,747 m (5,732 ft) of water, 177 km (110 mi) off Rio de Janeiro state. In the same region, the company has proven a westerly extension of the Iara oil accumulation via an appraisal well in the BM-S-11 concession. The location is 9 km (5.6 mi) from the main Iara discovery well in 2,150 m (7,054 ft) water depth.

OGX has presented a declaration of commerciality to state agency ANP for Waikiki, the proposed new name for the Tubarao Martelo field in the shallow water Campos basin blocks BM-C-39 and 40. At the same time, it has commissioned two further wellhead platforms for Waikiki and the producing Waimea field. Both are under construction at the OSX shipyard in Brazil's Acu Superport, and are due to be installed offshore in 2014.

UK independent Borders & Southern has proven gas and condensate with the first ever well south of the Falkland Islands. The semisubmersibleLeiv Eiriksson drilled well 61/17-1 on the Darwin prospect, encountering net pay of 67.8 m (222 ft) in the main reservoir interval, with average porosity of 22%. The reservoir could hold large volumes, although the remote location and Argentina's increased hostility to E&P activity in the area poses questions over the commercial value.

In the offshore North Falkland basin, Rockhopper continues to talk up prospects for development of its Sea Lion area fields. Gaffney Cline Associates' latest report for the company assumes costs of $4.8 billion, based on a newbuild FPSO with 34 wells and subsea facilities. Rockhopper, however, is thinking in terms of a leased floater, with a phased drilling program.

Anadarko has suffered disappointment with its latest two ultra-deepwater wells on the normally prolific West Africa transform margin. The Mercury-2 appraisal well of Sierra Leone and the Kosrou-1 exploratory well in Cote d'Ivoire block CI-105 were both water-wet. In the latter case, the rig was due to transfer to CI-103 to test the Paon structure.

Offshore Angola, Total has ordered seven new subsea production trees and associated wellheads and jumpers from Aker Solutions for its latest phase development of the deepwater Dalia field in block 17. Deliveries are scheduled for 2013-14.

Statoil is farming into 35% of Ghana's Deepwater Tano/Cape Three Points permit, just south of the Jubilee field, which is operated by Hess in partnership with GNPC. Statoil will part-fund a third well on the acreage, Hickory North-1, due to be drilled by theStena DrillMAX drillship.

Saipem's laybargeCastoro Sei has completed installation of the second Nord Stream gas pipeline in the Baltic Sea. Following seawater flooding, cleaning and pressure testing, the three sections of Line 2 were due to be connected by underwater hyperbaric tie-ins off the coasts of Finland and Sweden. After a further phase of de-watering and drying, the completed pipeline will be linked to landfalls in Russia and Germany and put into operation toward year-end. Line 1 began transporting gas from Russian onshore fields last November.

New tax incentives for production offshore Russia have spurred a series of co-operation agreements involving Eni, ExxonMobil, and Statoil. All three companies have formed partnerships with Rosneft to jointly explore and develop fields and acreage in the Barents Sea and Black Sea (Eni); the Kara Sea and Black Sea (ExxonMobil); and the Barents Sea and the Sea of Okhotsk off eastern Russia (Statoil). Two of the agreements could also lead to Rosneft participating in Statoil programs in the Norwegian sector and in Eni's projects elsewhere. Rosneft is thought to be pursuing a further offshore Arctic partnership with TNK-BP.

Delek Group says a budget of $100 million has been approved for exploration and development of the shallow water Pinnacles gas field offshore Israel. A full reservoir report should be issued in July, following completion of a development well.

Last month, theEnsco 5006 started drilling ATP Oil & Gas' first exploratory well off Israel in the Levant basin. It is targeting the Shimshon prospect in 3,622 ft (1,104 m) water depth. Protective casings will be removed once the well has penetrated the salt layer. Partner Isramco estimates potential resources in the range 1.5-3.4 tcf.

Lukoil has contracted pipeline installations related to the Vladimir Filanovsky development in the Russian sector. Bumi Armada will lay 40-km (24-mi) of subsea pipelines connecting the V.Filanovsky and Yuri Korchagin production facilities. Saipem will install two 114-km (71-mi) oil and gas lines between the V.Filanovsky riser block and the onshore reception site. Both programs should be completed in 2015.

The partners in the Shah Deniz field off Azerbaijan have sanctioned front-end engineering design for the $25-billion Stage 2 development, designed to export gas via long-distance pipelines to markets in Europe. The field, 70 km (43 mi) offshore, contains estimated resources of over 30 tcf. Stage 2 will likely involve adding two new bridge-linked production platforms, 26 subsea wells, and 500 km (310 mi) of subsea pipelines in water depths of up to 550 m (1,804 ft).

Saudi Aramco has started up two new process facilities at the Khursaniyah gas plant, which receives production from the offshore Karan field. The gas treatment and sulfur recovery trains are fully operational, and two more gas trains should be in service by mid-year. Offshore, one tie-in platform and three production installations have been completed, with a fifth due to be operational this summer. All are remotely controlled from Khursaniyah.

DNO International, RAK Gas, and Dahan Petroleum have signed an amended agreement to the Saleh concession offshore Ras Al Khaimah, UAE. This gives Dahan the right to explore outlying areas of the permit in exchange for covering the other two companies' costs in an exploration campaign. A discovery could be tied back to the Saleh gas-condensate production complex, 45 km (28 mi) offshore, where DNO plans a redevelopment.

Apache Corp. could start drilling its first deepwater exploration well off Kenya during the next three months. The company has secured the drillshipDeepsea Metro I to drill the Mbawa prospect in 860 m (2,821 ft) water depth in license L8. Apache's partner Pancontinental Oil & Gas assesses Mbawa's oil potential at the main Tertiary/Cretaceous level at 4.9 Bbbl.

Woodside Energy expects its North West Shelf North Rankin redevelopment project to be completed in 2013. Earlier this year the topsides for the North Rankin B platform were transported from South Korea and installed on the jacket – the company claims the floatover was one of the world's largest heavy lifts in open water.

Twelve new exploration permits have been issued offshore western and southeastern Australia following bids for last year's Offshore Petroleum Exploration Acreage Release round. Apache, BHP, Finder, Hess, Murphy, and Woodside picked up concessions in the northern Carnarvon basin off Western Australia. Finder and IPM Browse gained further awards in the Bonaparte and Browse basins. In the Gippsland basin off Victoria, Bass Strait Oil secured the $296 million VIC/P68 permit. The awards should lead to over $A300 million in investments over the next three years.

Eni has signed a PSC with CNOOC for exploration of deepwater block 30/27, 400 km (248 mi) offshore Hong Kong in the South China Sea. Eni will operate the project, which will involve acquisition of 2,000 sq km (772 sq mi) of 3D seismic and drilling of one well during the initial exploration phase.

In the western sector of the South China Sea, CNOOC has proven more gas in the Yinggehai basin via the Dongfang (DF) 13-2 well, which encountered 35 m (115 ft) of pay in a high--pressure/high--temperature reservoir. On test, the well flowed over 42 MMcf/d. It follows successful appraisal of the DF 13-1 gas field in 2010.

In the eastern part of Bohai Bay, CNOOC has successfully appraised the Penglai (PL) 9-1 structure, which it claims is the largest oilfield discovery in the region in recent years. A short distance to the south, CNOOC discovered more oil in the PL15-2 structure, opening the way for a new wave of development in the region, according to CEO Li Fanrong.

PTTEP has started production from the Greater Bongkot South gas-condensate field development in the Gulf of Thailand, 200 km (124 mi) east of Songkhla, in partnership with Total and BG Group. Facilities comprise a central processing platform, a living quarter platform, and 13 wellhead platforms, with capacity to deliver 350 MMcf/d of gas to the PTT-operated grid onshore Thailand. Condensate at up to 15,000 b/d heads 80 km (49.7 mi) north to the existing FSO on the Greater Bongkot North field.

Petronas has signed a Heads of Agreement with Total to study development of the K5 field offshore Sarawak, which was discovered in 1970. K5 has carbon dioxide (CO2) content of up to 70%, 20% greater than the current threshold for fields under development in Malaysia. The partners will investigate technically feasible development and CO2 management methods, including transportation and sequestration.