Exploration off South Africa has entered a new era, with Total/CNR preparing to drill the country's first ultra-deepwater well in 1,450 m (4,757 ft) of water off the south coast. What was once a relative offshore backwater has become one of Africa's hot spots, with all available near-shore and frontier deepwater licenses taken up. 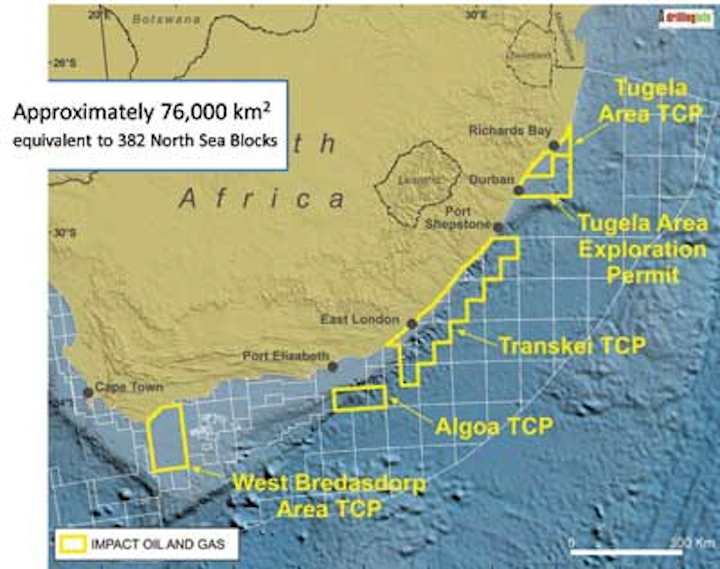 Exploration off South Africa has entered a new era, with Total/CNR preparing to drill the country's first ultra-deepwater well in 1,450 m (4,757 ft) of water off the south coast. What was once a relative offshore backwater has become one ofAfrica's hot spots, with all available near-shore and frontier deepwater licenses taken up.

Among the influx of operators assessing previously untested plays are Shell and ExxonMobil, along withAnadarko, operator of the breakthrough gas discoveries in the Rovuma basin off neighboring Mozambique.

However, South Africa's offshoregeology and prospective formations are more analogous to the areas north and south of the Falkland Islands and the West African transform margin, according to Impact Oil & Gas. The London-based independent, formed in 2009 specifically to target opportunities around Africa, is working in partnership with ExxonMobil, with four licenses off South Africa's southern and eastern coasts. The combined acreage of 75,991 sq km (29,340 sq mi) is one of the largest held by any privately owned E&P company.

Exploration of South Africa's waters started in 1967, two years after the formation of national oil company Soekor. The government awarded offshore concessions to various bidders including ARCO, Esso, Gulf Oil, Shell, Superior, and Total. Offshore drilling started in 1969, with Superior discovering gas and condensate in the Ga-A1 well in the Pietmos basin. Soekor stepped up its offshore program the following year, but the introduction of sanctions against South Africa caused the other license holders to withdraw. From the mid-1970s until the end of apartheid, Soekor remained the sole explorer, operating the country's entire offshore area.

Much of the exploration focus offshore since 1980 has been on the Bredasdorp basin, leading to discoveries of, and subsequent production from, various small oil and gas fields. There have also been gas finds in the Pietmos basin east of Bredasdorp, and others in the Orange basin off the west coast, along with one oil discovery. Altogether, over 300 exploratory and appraisal wells have been drilled off South Africa's shores, but until now results have been modest, forcing the country today to import around 500,000 b/d of oil to meet its needs.

In 1994, the new globally recognized government attempted to galvanize interest by launching a second licensing round to international investors, but the response was limited due to the fiscal conditions. Five years later, the government established the Petroleum Agency of South Africa (PASA), and in 2001 merged Soekor and gas-producer Mossgas to create a new state oil company, PetroSA. In 2004, the country's Mineral and Petroleum Resources Development Act came into operation.

Another bid round came and went in 2007, in which a solitary license was awarded to PetroSA off the western coast. Then in 2009, Charles Ramsden, a South African geophysicist based in Singapore, heard that PASA was preparing to put up new areas for a 4th licensing round, including a prospective play offshore Durban on the east coast covered by 5,000 km (3,107 mi) of legacy 2D data from the 1960s. He persuaded PASA to allow him to reprocess the data, and sent out fliers which were roundly ignored. Undeterred, he approached Steve Ilett, a former colleague in the UK, to interpret the data. The results persuaded Ilett and three fellow geoscientists to form Impact Oil & Gas to bid for fourth round offshore blocks, via an arrangement with Singapore-based Silver Wave Energy.

In December 2009, Silver Wave was awarded an exploration right under the fourth round for four blocks in the Tugela area offshore the southeast coast, with Impact agreeing shortly afterwards to farm in with an 80% operated interest. The only other applicant was Shell, which secured acreage in the Orange basin. Anadarko's subsequent Windjammer discovery off Mozambique transformed the situation, triggering a "stampede" of would-be licensees to South Africa, according to Impact's Executive Chairman Mike Doherty. However, the company used its head start to bid successfully for three Technical Cooperation Permits (TCPs) for the offshore Tugela North, West Bredasdorp, and Transkei/Algoa areas.

PASA issues TCPs in cases where the applicant agrees to perform a desktop study and acquire existing seismic data, typically over a period of one year. The terms do not include prospecting or exploration activities, although the holder can undertake these tasks by applying exclusively for an Exploration Right, following submission of an environmental management process and stakeholder consultations. An Exploration Right carries an initial three-year term and is extendable up to nine years. In this case, the work program includes reprocessing existing seismic or acquiring and processing new seismic data, with a view to drilling a prospective structure, followed potentially by an extended well test.

"South Africa's licensing terms were attractive and helped to attract majors and super-majors to the country," Doherty said. However, he is concerned that the government now appears to be fasttracking amendments to the country's Mineral and Petroleum Resources Development Act.

PetroSA and Soekor are responsible for most of the 300-plus exploration wells drilled to date off South Africa. All of these were on the shelf, including PetroSA's small gas fields in Mossel Bay, which serve as feedstock for the Mossgas syncrude plant. The low success rate was largely due to the limits of seismic imaging techniques at the time. "In the past, companies were looking for four-way dipped closed structural traps," Doherty explains. "Now we can identify combination structural/stratigraphic traps and reservoirs that were effectively invisible on the old seismic data."