Fugro has recently announced two seep studies, the first of which continues a partnership with TGS in the Gulf of Mexico. 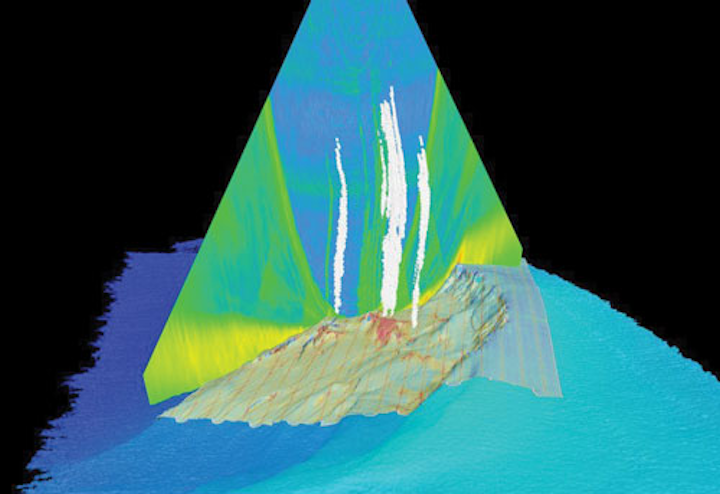 Fugro has recently announced two seep studies, the first of which continues a partnership with TGS in the Gulf of Mexico. For this project, Fugro will continue to map the seafloor in the to pull together a complete picture of geological features, including hydrocarbon seeps.

This latest survey, Otos, follows the successful completion of another TGS industry-funded Gigante survey in 2016, on the Mexican side of the 1,500-km (932-mi) wide GoM. Fugro has deployed two geophysical survey vessels to acquire multibeam echo sounder (MBES) and sub-bottom profile data over the western, central, and eastern regions of the US continental slope.

In water depths ranging from 750 m (2,460 ft) to more than 4,000 m (13,123 ft), geoscientists on boardFugro Gauss and FugroBrasilis will analyze seafloor bathymetry, its acoustic reflectivity, and shallow subsurface structures to identify hydrocarbon seep features on the seafloor and throughout the water column. Both vessels are equipped with hull-mounted MBES systems and the data collected will aid a subsequent geochemical coring campaign.

The final results of the Otos survey will provide novel insight into the regional-scale distribution of hydrocarbon seeps throughout the entire deepwater area of the northern Gulf of Mexico. TGS will license the data to exploration and production companies to support development activities in this prolific region.

Fugro Exploration Geoscientist Garrett Mitchell, and a member of Fugro’s dedicated Global Centre of Excellence for Seep Hunting in Houston, said: “With the acquisition of the Otos seep survey, Fugro will have mapped almost 1,000,000 sq km (386,102 sq mi) of seep and geological features over the entire Gulf of Mexico.”

For the second seep survey project, Fugro was awarded a contract by Shell/BG Kenya for a seabed seeps to complement a seismic exploration program that was completed recently offshore Kenya.

Undertaking a four-week campaign of multibeam data acquisition and precise sampling, Fugro planned to mobilize its survey vessel,FugroDiscovery, to Kenya in March. Seabed sampling will be carried out using a drop corer and multibeam data will be acquired with the latest deepwater high-resolution multibeam echo sounder, installed in a newly designed gondola on the vessel hull.

Furgro said that this project is one of many seeps campaigns it is completing globally for Shell and it is managed under a joint Fugro-Shell Safety Leadership program, the project optimizes both companies’ expertise in efficient and safe delivery.

As part of its newly signed E&P concession contract with the government, Energean Oil & Gas will survey blocks 4219-26 and 4218-30 offshore the State of Montenegro, following parliamentary approval.

Total investment over the initial seven-year exploration period will be $19 million, including funding for a new 3D seismic survey, geophysical and geological studies, and the drilling of one well. The company plans to start 3D seismic acquisition during 1Q 2018.

The Athenian company’s Group Chairman and CEO Mathios Rigas said that the company believed the geology to be similar to that in western Greece, where it has been exploring onshore Ioannina since 2014, and have a field development plan in progress offshore West Katakolon.

CGG has reported that final data for its Carabao multi-client study, acquired offshore the Philippines, is ready for delivery. The study integrates more than 8,500 km (5,282 mi) of new broadband prestack time-migrated 2D BroadSeis data and complementary marine gravity and magnetic data acquired with the seismic.

The BroadSeis data was acquired from May to August 2016 and processed in CGG’s Singapore imaging center. The survey connects diverse sedimentary basins across the Philippines from West Palawan (the only basin the French company says it currently producing in the country), across the Sulu Sea, to the Philippines Mobile Belt.

The survey area is characterized by extensional and compressional tectonic elements and displays positive indications of active petroleum systems.

The marine gravity and magnetic data were acquired and processed in parallel with the seismic survey by CGG Multi-Physics. This potential field data will aid interpretation by providing an overview of the basement-controlled structural trends in the area. By considering different physical properties of the same geological section, the potential field data can also discriminate between volcanics, intrusives, carbonates and salt, where present, further de-risking and enhancing interpretation of the seismic data.