As 2015 came to a close, drilling activity in the US Gulf of Mexico was feeling the effects of the sustained lower oil price environment. 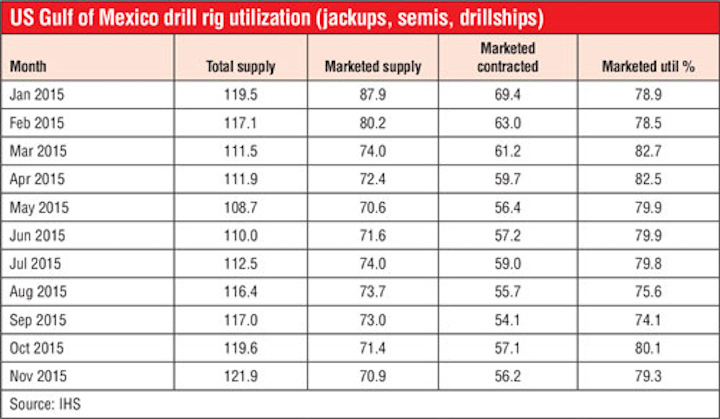 As 2015 came to a close, drilling activity in theUS Gulf of Mexico was feeling the effects of the sustained lower oil price environment. While the actual supply of jackups, semis, and drillships in the US GoM grew from January 2015, the number of marketed rigs declined over the course of the year.

The growth in the total supply was primarily due to jackups fromMexico being moved to the US Gulf Coast to be stacked and not to be marketed for work, says Cinnamon Odell, Senior Analyst-Offshore Rigs at IHS Petrodata. She notes that total supply grew by about three rigs over 2015, while the marketed supply fell by 17. Removing rigs from the actively marketed fleet helped bolster the marketed utilization rate, which was 78.9% in January 2015 and 79.3% for November 2015.

Consistent with the state of theworldwide offshore drilling rig market, the contracted rig count in the US GoM fell over the course of the year. However, when divided by rig type, the number of contracted drillships in November 2015 was up by two over the January 2015 figure, attributable to the arrival of newbuild rigs that were already contracted prior to the downturn. The contracted semisubmersible rig count fell by six, and jackups were hardest hit with a decrease of 10 from the beginning of the year.

The drilling rig outlook for the US Gulf for 2016 is expected to continue to be rough, in particular for jackups, Odell observes. “Without a significant increase in oil prices, demand for jackups is forecast to remain at about 7-9 units throughout the year,” she says. “For floating rigs, those that roll off contract in 2016 are very likely to not be renewed and to have either a small gap between jobs, or to remain idle for the rest of the year.” The forecast is for demand to be in the mid-40s throughout 2016, she said. For more on expecteddrilling activity in the GoM this year.

Meanwhile, a total of 21 new drilling permits were issued for the US GoM in November, up from 19 in October but down from 25 a year ago, according to Evercore ISI’s US Drilling Permit Monthly report of December 2015. 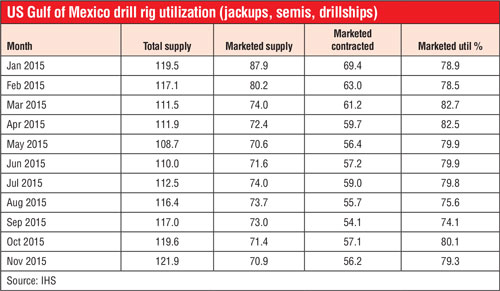 Meanwhile, the number of new exploration plans filed in the Gulf rose to seven (from five) but operators filed plans to drill a total of just 11 wells, down from 22 in November 2015. The report noted that no development plans had been filed to drill in the past two months, and went on to say that the development of the Lower Tertiary “appears to remain a long ways off as the industry has filed few development plans year-to-date.”

“With pricing having contracted sharply,” the report comments, “we expect development activity to accelerate slightly in the coming months and years and believe the Gulf of Mexico will be the only relative bright spot for deepwater activity in 2016-2017.”

W&T Offshore, Inc. says it has made a significant discovery at the Ewing Banks 954 A-8 exploratory well located in the deepwater Gulf of Mexico. The well, which recently reached total depth, represents the second discovery in a two-well drilling program from the EW 910 platform. This second well follows the earlier discovery at the ST 320 A-5 well in May 2015, which was also drilled from the EW 910 platform. W&T is operator of EW 910 field and owns a 50% working interest in the well.

The EW 954 A-8 well penetrated a total of 150 ft of measured depth hydrocarbon pay, contained in two sands. Completion operations are currently underway with a planned two-zone completion.

Following facility tie-in, first production is expected during 1Q 2016. Although no well flow tests have been conducted, based on formation evaluation data, the company says it anticipates producing the well from the two zones at a restrained gross rate of approximately 2,300 boe/d.

In mid-December, Mexico’s Energy Ministry announced plans for the highly anticipated tender of deepwater exploration blocks in theGulf of Mexico, according to a report in the Wall Street Journal.

The ministry said the government’s fourth oil auction (including two shallow-water auctions and one onshore auction) will be announced by 3Q 2016 and held within 90 days of that announcement. Officials had been promising details on the deepwater auction over the past several weeks, prompting industry speculation on the holdup.

Ten blocks will be offered, the ministry said, including four in thePerdido area of the Gulf near the US maritime boundary. If commercial quantities of oil and gas are found on the Mexican side, the government would employ a license contract model that is similar to a concession used in other markets. Mexico also allows production-sharing and profit-sharing contracts, although industry generally prefers licenses or concessions because of their relative simplicity to administer.

“Taking into account the circumstances of high volatility in the international oil market, and with the purpose of assuring the best conditions for the government, the [Energy Ministry] decided to include only the deepwater areas of the Gulf,” the ministry said in a statement.

The deepwater announcement came a day after the National Hydrocarbons Commission, the government’s oil regulator, successfully auctioned off all 25 onshore contracts up for bid.