Floating production units (FPUs) are being deployed in increasingly harsh environments, and high-capacity turret mooring systems are fundamental to making this possible. 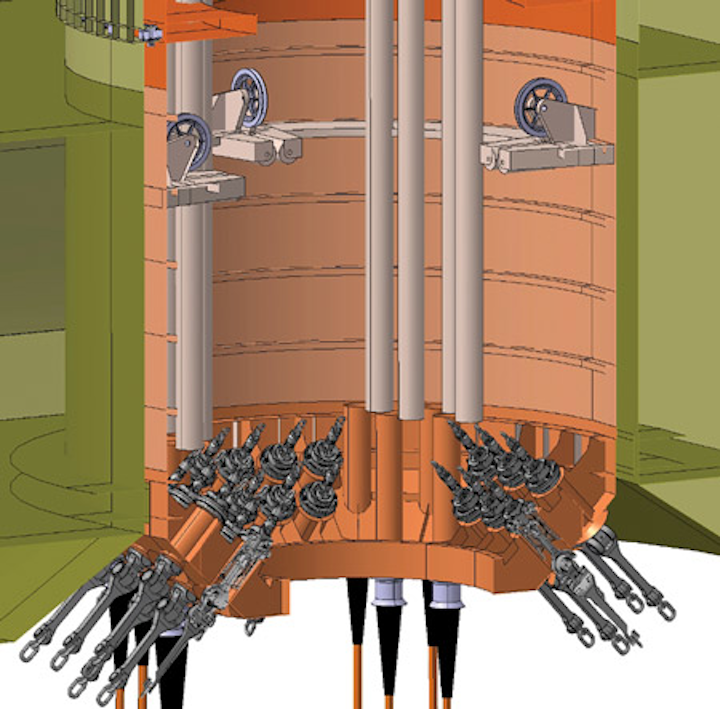 Floating production units (FPUs) are being deployed in increasingly harsh environments, and high-capacity turret mooring systems are fundamental to making this possible. Turret systems allow the vessel to weathervane around the mooring, adopting the position of least resistance to the prevailing weather, thereby minimizing loads on the vessel's hull and mooring system.

Using a weathervaning system based on its standardized design of bogie, SBM Offshore has, over the years, supplied turrets capable of withstanding mooring loads as high as 10,000 metric tons (11,023 tons), and still higher mooring load capacity is achievable using the same system.

However, the combination of harsh environments and the steadily increasing design lives of industry projects are raising concerns over the integrity of the mooring legs that hold the FPUs on station, and the inspection and maintenance of mooring leg components has become a key component of the integrity management philosophy. In parallel, safety issues associated with diving are a major concern for offshore operations, leading most field operators to promote diverless operations for the hook-up and maintenance of FPU mooring systems.

The ARCA incorporates various features, including diverless connection and disconnection of the mooring legs. The design also allows the mechanical parts, including articulations, to be disconnected and brought to the surface for inspection, again without diver intervention.

In the ARCA concept, the connector and its articulations are part of the mooring line, rather than being integrated into the FPU's chaintable. During hook-up of the FPU, the connector is pulled into a housing tube which is built into the chaintable, and is then supported on a receptacle at the top of the tube. The housing tubes occupy less space than a traditional chain stopper, potentially allowing the turret diameter to be reduced and cost savings to be achieved.

A further advantage of the concept is the simplified integration of the turret at the shipyard. Only the housing tube and receptacle are integrated into the chaintable, and these do not protrude below the chaintable in the manner of a typical chainstopper. The ARCA removes requirements for the minimum clearance that must be provided below the vessel keel. It also dispenses with the need to seafasten protruding chain stoppers for the voyage to the offshore site, and the need to later remove the seafastening, an operation that would usually require divers. 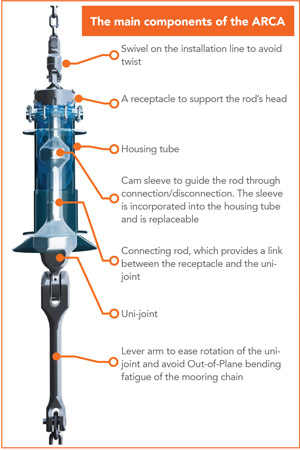 The diverless connection and disconnection of the ARCA is achieved using an automatic latching mechanism. This is based on a cam profile that determines the path followed by guiding pins which are integrated into the connecting rod. The pins in turn force the rod to rotate as the ARCA is pulled into the housing tube, so that the head of the ARCA aligns and passes through a slot in the receptacle at the top of the housing tube, before rotating further and then being lowered to be seated on the receptacle.

Once the head is seated on the receptacle, the uni-joint mechanism is effectively fixed into the chaintable, allowing the mooring loads to be transferred from the mooring leg to the turret. The low-friction bushings employed in the ARCA articulations allow the lever arm to readily align with the chain and reduce the OPB loads on the top chain links.

Disconnection of the ARCA is achieved by again tensioning the installation line connected to the remote winch. The cam will cause the rod to rotate until it is free to drop out of the housing tube, where it can then be retrieved on a work boat to allow inspection or replacement of the articulations.

This connection and disconnection procedure has parallels with the operation of a ball-point pen, in which the first click drives a cam that locks the nib in a position to write, and a second click releases the nib so that it can retract.

To validate the design and functionality of the ARCA, a full-scale prototype was constructed and a purpose-built test bench fabricated to allow verification of functionality under different installation conditions. The test bench is located over a 26-m (85-ft) deep pit, which allows the rig to be inclined to simulate pulling-in of the ARCA at typical mooring leg inclination angles. The test rig allows chain pre-tension loads of 200 metric tons (220 tons) to be imposed: The required pull-in loads to overcome pre-tension and friction in the housing tube and cam are provided by a winch with a capacity representative of turret installation winches.

Full-scale tests have been performed to verify the ARCA performance, with successful connection under misalignments of up to 20° between the ARCA rod and the housing tube at the start of pull-in.

The ARCA's latching system allows diverless connection and disconnection of the mooring legs of an FPU, leading to increased safety in operation. By allowing inspection and replacement of the chain connector articulation, the design helps addresses the industry's concerns over mooring integrity management. This is of particular benefit for mooring systems in harsh environments with long design lives.

Additionally, the turret diameter can potentially be reduced, allowing for optimization and cost savings. A complete qualification program has been performed, including full-scale testing, and the technology has been included in several proposals for future full-scale industry projects. •