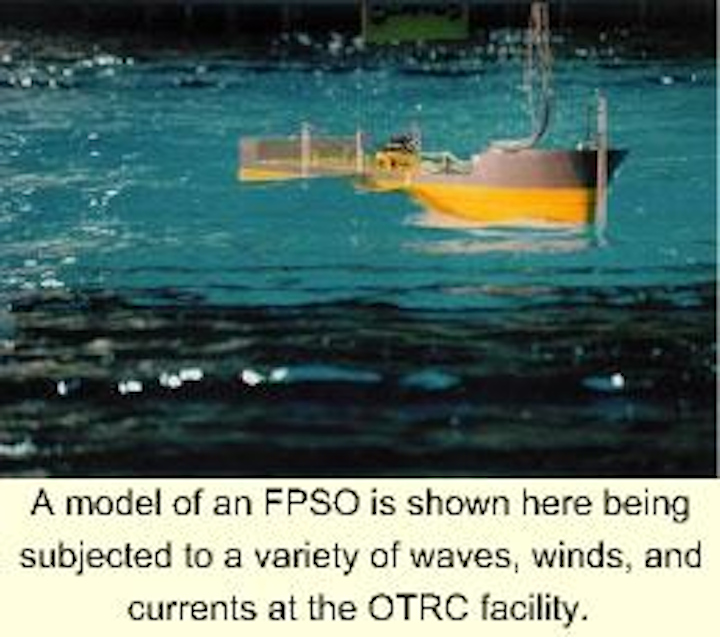 Before floating production, storage and offloading (FPSO) vessels are allowed to operate in the US Gulf of Mexico, they must be shown to be as safe as other systems in use. Currently used systems include fixed platforms, tension leg platforms (TLP), spars, and even some semisubmersibles. These systems have already been approved by the US Minerals Management Service (MMS), and thus provide a benchmark for new technologies to meet.

There are two major studies underway to assess the safety of FPSOs for operation in the Gulf of Mexico, according to E.G. "Skip" Ward, Associate Director of the Offshore Technology Research Center (OTRC) which is a joint venture of Texas A&M University and the University of Texas.

Both studies are scheduled for completion at the end of 2000. Ward said, over the last 10 years, the center has been involved in every major new floating technology now present in the Gulf. The initial goal of the center, when it was first established was to see the industry out to 3,000-ft water depths.

The industry got to 3,000 ft with a series of new floating designs. The center was involved in the testing of early TLPs, Spars, mini-TLPs, and semisubmersibles that have contributed to stepouts in water depth.

As the OTRC enters its second decade, the goal for the next 10 years is to support the industry's need for technology and testing in depths to 10,000-ft water depths. As the center looks forward for the next 10 years, the obvious next step is to help bring the FPSO concept to the Gulf.

Ward noted that applications of FPSOs in other parts of the world have included environments at least as severe as the Gulf, and FPSOs are often manned during the design event which allows a marine crew to actively control the FPSO heading.

Gulf of Mexico FPSOs will likely be unmanned during hurricanes, as is the practice for all other production systems in the Gulf. Thus, the FPSO will have to ride out a hurricane passively by weathervaning in the rapidly shifting winds, waves, and currents as the hurricane passes.

The OTRC is also planning a set of experiments in its wave basin to confirm the response of an FPSO riding out a severe Gulf hurricane and weathervaning in the changing hurricane seas.

FPSOs differ from existing development systems used in the Gulf of Mexico in several key areas that must be considered when comparing risks.

If the turret is located amidships, heave is reduced, but the vessel weathervanes less effectively leaving it open to the possibility of taking heavy seas broadside and rolling more.

To properly evaluate the risks of this system, Ward said such questions as the optimal location of the turret must be investigated up front. Using the wave tank at the OTRC, a model of an FPSO will be subjected to a variety of waves, winds, and currents to determine where the turret should be located.