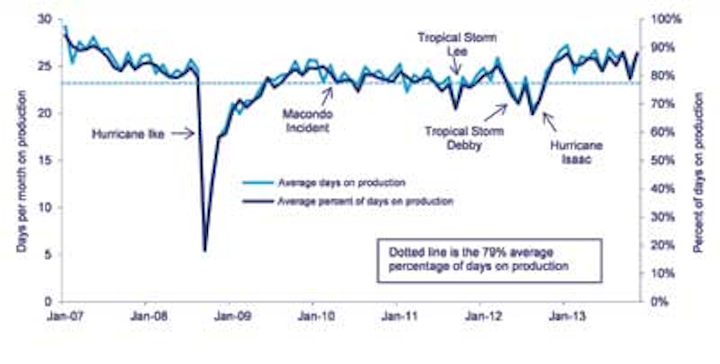 Wood Mackenzie recently studied the number of days of production per month for more than 1,200 wells indeepwater Gulf of Mexico (GoM) between 2007 and 2013. Production wells are thought of as flowing more or less consistently. However, these wells can be shut-in for numerous reasons, including inclement weather, equipment failure, and on-going maintenance drilling programs like workovers, side tracks, and recompletions.

Based on the study, producing oil and gas wells in deepwater GoM were online on average only 79% of the time – less than 10 months in any given year. While it is intuitive that a loss of production leads to lower revenue in the near-term, there is also a long-term impact as oil and gas production is deferred. Reducing uptime decreases oil and gas fields' net present value (NPV) and internal rate of return (IRR). For a larger field in deepwater GoM, less than a 10% change in producing days each year leads to as much as a 15% change in NPV. For Wood Mackenzie's base case model Lower Tertiary field with a valuation of $822 million, this is the equivalent of $100 million in unrealized returns.

So while the average well in the region has been producing the equivalent of 24 days per month, there is substantial underlying variation from well to well and year to year. The standard deviation was approximately 10%, or roughly three days. However, there are occasional periods when the majority of wells are not producing simultaneously. For example, after Hurricane Ike a majority of the fields were shut-in for months due to damage to production facilities and infrastructure. During this time, the average number of days per month on production dropped below 20% in September 2008 and did not exceed 60% until January of the following year. Hurricane Katrina had a similar effect on production three years earlier.

Despite there being only one major hurricane between 2007 and 2013, Ike was severe enough to shut-in the majority of deepwater wells for almost four months. If Ike is excluded, the six-year average increases from 79% to 81%. This does not reflect the variation in shut-in duration from well to well. Operators with sufficient contingency plans for pipeline and facility damage as well as logistical limitations can bring their wells online faster than the average. For example, oil exported via Shell's Auger pipeline system was re-routed through a temporarily reversed section of the Poseidon pipeline following Ike. Fields without that flexibility could be shut-in for infrastructure repairs after future hurricanes.

While weather related shut-ins are inevitable, there are other times where wells or entire fields go offline. Whether due to maintenance, workovers or equipment failure, these also impact the field's economics. Subsea tiebacks have an increased risk of being shut-in because of problems or maintenance at the host facility. Although these shut-ins are also unavoidable to some degree, operators can design maintenance and workover programs to minimize downtime and to increase a producing asset's value.

To illustrate how changes in days of production per month affect the value of different types of fields in GoM, compare two model fields under varied risking conditions. One is a multi-well, Lower Tertiary field, similar to BP's Kaskida (KC 292) or Chevron's Jack (WR 759). The other is a single-well, Middle Miocene subsea tieback, similar to those in Noble Energy's Rio Grande complex.

Asoil and gas production is deferred into the future, the NPV and IRR for each field is reduced in real terms. For a base case model Lower Tertiary field, the NPV is $822 million and IRR is 16.5%. An additional month of production each year increases the NPV by $100 million and IRR by 1%. These effects also increase with field size. In the case of the largest Lower Tertiary field modeled, Tiber at 566 MMboe, producing for 11 months a year increases the valuation by over $300 million.