Tullow Oil predicts average full-year production from the Jubilee field offshore Ghana of around 89,000 b/d this year, below expectations. 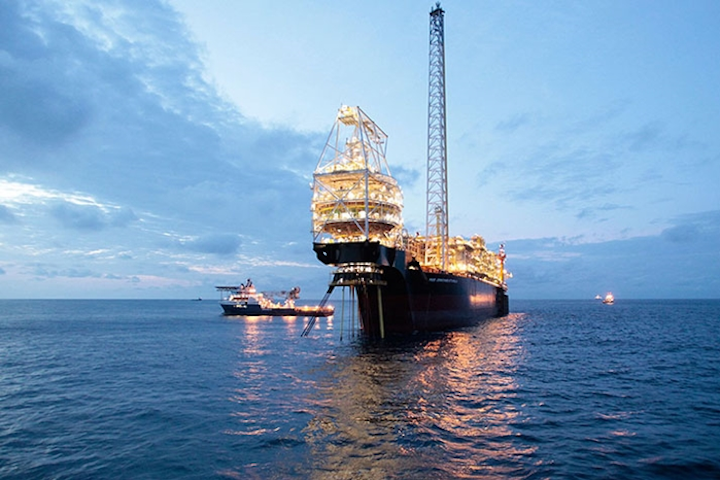 LONDON – Tullow Oil predicts average full-year production from the Jubilee field offshore Ghana of around 89,000 b/d this year, below expectations.

The dip is due mainly to topside issues which have impacted water injection and gas handling. However, water injection should return to full capacity by the end of this month and the company plans enhancements early next year to increase gas throughput capacity.

TEN’s likely full-year output of around 62,000 b/d has been constrained by the suspension since July of the EN14-P well, which also forced completion of the paired injector well Wn16-WI to be postponed.

Associated gas sales look set to average around 125 boe/d for the full year.

Gas export from both fields has been limited by low demand from the Ghana National Petroleum Co., but an increase appears imminent following discussions on increasing gas offtake.

That in turn should reduce the volume of gas being reinjected into the fields, improving oil production over time.

Tullow expects to continue to use the drillship Maersk Venturer across both the TEN and Jubilee fields in 2020. The partners continue to assess an infill drilling program and future development plans in both cases.

Elsewhere in West Africa, the company expects decommissioning of the well at the offshore Chinguetti field (operator Petronas) to start by year-end.

Off Namibia, Tullow completed acquisition of a 56% operated interest in block 2813B from Calima Energy. Prospectivity includes a Cretaceous turbidite play which various parties in the area look set to drill in 2020.

The company has completed a 3,000-sq km (1,158-sq mi) 3D seismic survey over its three blocks in another frontier play offshore the Comoros.

In South America, Tullow expects the (non-operated Marina-1 well) to spud during 1Q 2020 on block Z-38 off Peru. Marina is in 350 m (1,148 ft) of water and will be the first well to target the deeper water plays in the Tumbes basin, the company said.

To the north off Suriname, Tullow is finalizing the submission of an environmental statement ahead of planned drilling on the Goliathberg North prospect during the second half of 2020.

Finally, the company is reprocessing existing seismic over its three operated blocks offshore Argentina, and is making preparations for a new 3D survey covering around 10,000 sq km (3,861 sq mi) over blocks MLO-114 and MLO-119.