Industry gears up for new year filled with challenges, opportunities 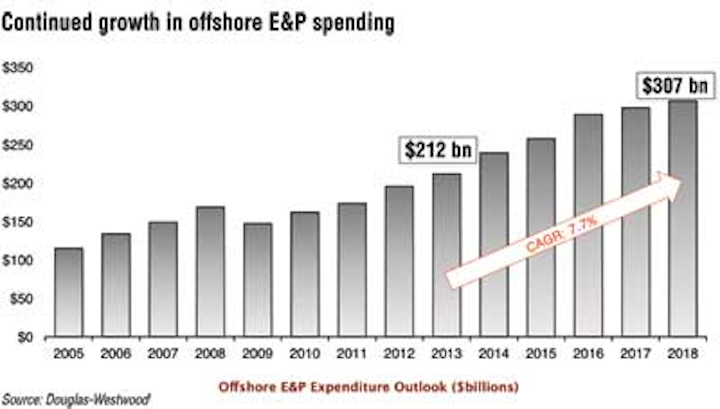 We all need to remember, but often choose to forget, that the oil business is highly cyclical. There have been seven significant price cycles since 1970 and also a few minor ones between times, so yet another should come as no surprise. The real surprise is that no one ever seems to build the probability into their business planning!

The reasons for the fall in Brent crude prices from $115 in June to below $70 following November's OPEC meeting are well documented, as is the realization that Saudi Arabia is now defending market share, rather than a minimum price. That said, the nature of the oil and gas business in 2015 will be very different compared to that immediately after the 2008 financial crash.

Seventy percent of the additional oil production in recent years is unconventional. Much of this is from US shales and is not cheap oil, mostly needing prices of $60-80 to be commercially viable. What is more, well decline rates are rapid, and without ongoing drilling the current production capacity will be quickly eroded. By comparison, most deepwater production needs about $80 oil. 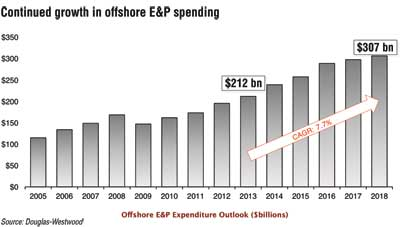 In the 13 years to the turn of the century, oil and gas exploration and production expenditures grew by 48%; between 2000 and 2013, expenditure growth was 287% as the industry supply chain was unable to meet demand for products and services. However, the increase in oil and gas production was a mere 24%, a situation that was clearly unsustainable.

The ensuing cut-back in oil company spending served to focus attention on project capital cost reduction and here progress is being made. In April, Total, Europe's third-largest oil company, cut the cost of its Kaombo project off Angola by about a fifth to $16 billion. Also great strides are being made in increasing the efficiency of drilling operations, which can form half the cost of many field developments. Baker Hughes, for example, has reported that by focusing on non-productive time, they saved some $10.4 million on a four-well project on the Terra Nova field offshore Newfoundland.

For the past two years, we have been warning about the potential for speculative building to result in oversupply in the mobile offshore rig market. The pattern is a familiar one across many sectors of the shipbuilding industry, from oil tankers to offshore vessels and rigs. As oil demand grows and prices increase, owners place orders – the first ones at low prices – but as yard capacity is taken up both build prices and delivery times increase. The early orders are delivered and owners sign contracts with the operators at lucrative day rates, but eventually deliveries exceed demand and day rates collapse – and as is presently the case – this sometimes coincides with an oil price downturn and investors get burnt. Time passes and eventually low oil prices boost oil demand, oil prices increase, drilling capacity is absorbed and so the cycle begins again.

In the case of drillships, unprecedented investment and supply additions will create a difficult market for the next five years. The current "order book to fleet ratio" is 61%. Of this, 44% is uncontracted!

New state-of-the-art rigs are needed to drill the deepwater presalt discoveries off Brazil and West Africa, and many units are coming onto the market. These will eventually be able to win contracts; but with growing oversupply, the question is at what day rate; and will we now see old units long past their sell-by date being retired?

Big oil needs big projects and with the Middle-Eastern NOCs dominating onshore production, deepwater remains one of the few places the IOCs can make major finds. Also, the largest offshore projects are not greatly influenced by today's oil prices. Instead, planners project what prices will be in the decades ahead. Many expect oil prices to again average $100 in the medium-long term. Considering the lead times of large offshore projects, there is less potential to revise near-term development plans. As a result, capex tends to be less subject to short-term hits than onshore spends, such as US onshore drilling.

Yes, there will be significant spending cut-backs as higher-cost, more economically marginal offshore projects are postponed, and exploration spend will also be reduced if E&P companies decide to wait for rig rates to fall further. However, it is likely that deepwater, despite its costs, is one area that will suffer less than others. So we feel confident about the long-term prospects for associated areas such as subsea production and floating production.

Another example of long-term thinking is FLNG – the scale of Shell's investment in its huge Prelude project clearly shows this. Over the next five years we expect to see capital expenditure of $41 billion on such units and a further $21 billion on regasification vessels.

In total, we estimate that some $212 billion was spent on offshore E&P in 2013; and that 2014 spend will have been even higher, when the totals come in. Looking ahead, key spending sectors will be offshore drilling at 31%, subsea at 15%, and engineering/construction at 15%. The other major sector is "life of field" expenditure at 39%.

As evidenced with past cycles, the present downturn could be a great buying opportunity. In global E&P the NOCs rule and they will continue to invest; China has been the high spender and India's ONGC now plans a huge $180 billion foreign production acquisition spree. Likewise in oilfield services – acquisition opportunities are likely to present themselves for both strategic and private equity buyers, as was the case in the last downturn. Even without oil demand growth – which is extremely unlikely – vast numbers of new development wells will need drilling worldwide each year to counter natural production decline rates of typically 7-10% per annum for conventional wells and up to 60% for unconventionals such as in the US shale plays.

It's likely that more than 80,000 development wells were drilled onshore in 2014 and some 2,500 offshore. Looking ahead, even greater numbers will be needed as present low oil prices begin to drive growing oil and gas consumption, boosting the demand for oilfield services. Furthermore, we believe that the annual total will need to grow to exceed 100,000 by 2020.

Over the past 30 years, growth in oil demand has been remarkably resilient to oil price changes – following the 2008 financial crises average annual oil prices fell by 37% in 2009, yet oil demand only fell 1% and was growing again in 2010.

Both high and low oil prices present opportunities for well-managed, well-financed companies that have a long-term view – the oil and gas industry is not a short-term game. But the window of M&A opportunity may well be very short before the next cycle begins.

John Westwood is chairman of Douglas-Westwood, the international energy business research and consulting firm he founded in 1990. The firm recently completed its 1,000th project. In addition to oil companies, contractors and financial organizations, Westwood has advised government agencies and presidential offices in six countries.