As autonomous underwater vehicle (AUV) operations increase in scale and complexity, the need for subsea persistence increases. The combination of Battelle and OceanWorks is developing resident AUV interface infrastructure that would make possible remote inspection and intervention without the need for surface support or complex umbilical handling systems. 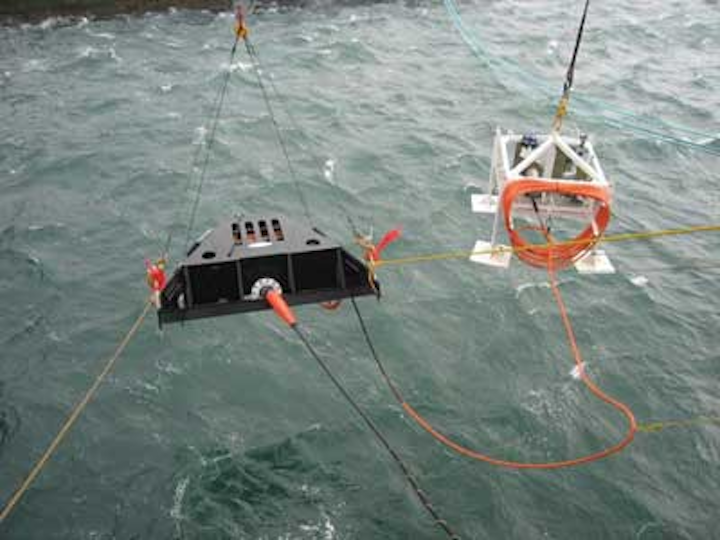 OceanWorks International has supplied hardware and software for seafloor network infrastructures, also known as cabled ocean observatories, since 2005. A seafloor network is a subsea infrastructure that can stretch for hundreds of kilometers along the ocean floor. Each network provides power and communications to arrays of distribution nodes on the seafloor. Starting with a single node structure 100 m (328 ft) deep, OceanWorks pioneered development of many modules to expand the capability of these systems, which now can monitor hundreds of instruments in real-time at depths to 3,000 m (9,840 ft), and even greater depths if required. Seafloor networks are built from modular blocks. Requirements differ for each application, and the seafloor network modules can be arranged in different topologies, with different features.

The modules are designed to operate for at least 20 years, providing a permanent infrastructure on the seafloor that supplies continuous power and high-speed data communications to instruments and equipment. Common seafloor network infrastructures are composed of four main modules: a shore station, a telecommunication cable, a primary node, and a subsea instrument interface module (SIIM) package.

The shore station is where the cable comes ashore. It includes an anode for sea water power return, a medium- or high-voltage power supply, and a high-speed Internet connection. The standard telecommunication cable, composed of a single power conductor and multiple optical fibers, can be laid or buried as required. The primary nodes connect to the telecommunication cable and convert power to an intermediate voltage. The nodes have underwater mateable connectors to distribute power and communications to secondary nodes, SIIM packages, or instruments. Finally, the SIIM connects to a node via an underwater mateable connector and provides a range of individually switched and monitored low-voltage ports and communication options to support a range of instruments.

Starting in 2005 OceanWorks acted as the system designer for the Victoria Experimental Network Under the Sea (VENUS) project to design and manufacture the shore station, primary nodes, and SIIMs.

The VENUS project consists of two separate cabled observatories: VENUS Saanich and VENUS Strait of Georgia (SoG). VENUS is the world's first multi-node cabled observatory. The three nodes and 12 SIIMs are deployed in water ranging from 100 to 350 m (328 to 1,148 ft) deep and extend as far as 40 km (25 mi). Up to 3 kW per node is available for distribution to SIIMs and instruments. Power converters, communications, and control in each node are dual-redundant to improve overall system reliability.

OceanWorks designed and built 14 SIIMs for the North-East Pacific Time-Series Underwater Networked Experiments (NEPTUNE) Canada project, which will meet growing scientific demands for the next 25 years. Each SIIM manages and distributes between 5 and 9 kW of power and can be placed up to 10 km (6.2 mi) away from a node at depths to 3,000 m (9,842 ft).

The Offshore Communications Backbone (OCB) is a seafloor network developed for the Mediterranean Sea off Cyprus. The greater OCB system is a fully flexible and re-deployable seafloor network that can supply up to 1,500 W per node for a variety of instruments. The system operates in depths of to 3,000 m and has more than 250 km (155 mi) of total cabled distance.

Most instrument ports on OceanWorks nodes and SIIMs have the following characteristics:

OceanWorks has developed battery pods and uninterruptible power supplies (UPS) rated to 3,000 m or greater if required. The UPS is based on a standard 150 kWhr element, which can standalone or connect in a daisy-chain or hub configuration to store up to 1 MWhr of energy. The UPS system allows for load levelling of high power operations on a duty cycle to limit peak current on the seafloor network (e.g., while recharging an AUV in a docking station) and to provide secure autonomous backup power and control for critical systems and controlled shutdown of sensitive equipment in the event of a network power outage. The UPS system can also be used as centralized power for short deployment subsea systems.

The envisioned resident AUV system will integrate a commercial OceanHub variant of the Battelle/Bluefin AUV docking and recharging station with OceanWorks seafloor network infrastructure nodes. Features will ensure forward compatibility with other subsea infrastructure. The baseline version of the system will use a standard Bluefin-12 or -21 AUV, with the option to accommodate different vehicles in future versions.

Implementation of this system will occur in phases, to demonstrate system performance under conditions of increasing depth and complexity.

During Phase 1, the system is planned to be demonstrated at the VENUS Saanich Inlet site, which is located 3 km (1.86 mi) from shore at a depth less than 100 m (328 ft). This phase will culminate with the Bluefin AUV performing an inspection on a mockup pipeline installed at the site. Phase 1 system engineering and site planning are in progress.

During Phase 2, engineering upgrades will be made to accommodate deepwater conditions. This phase will conclude with a system functional checkout prior to deepwater deployment. Phase 3 is planned to feature a deepwater demonstration of the resident AUV system at the NEPTUNE or CSnet OCB site (>2,000 m/6,560 ft depth).