One partnership is working to develop economic solutions for marginal fields even in the 5-10 MMbbl range. This involves use of what they term "buoyant solutions" which can be unmanned, minimal facility production buoys or self-installing floating towers, both suited to rapid depletion of small fields and easy re-configuration for service elsewhere. Enegi Oil and ABTechnology, via their joint venture ABT Oil and Gas, are working on a first potential application on the 10-MMbbl Fyne field in the UK central North Sea. 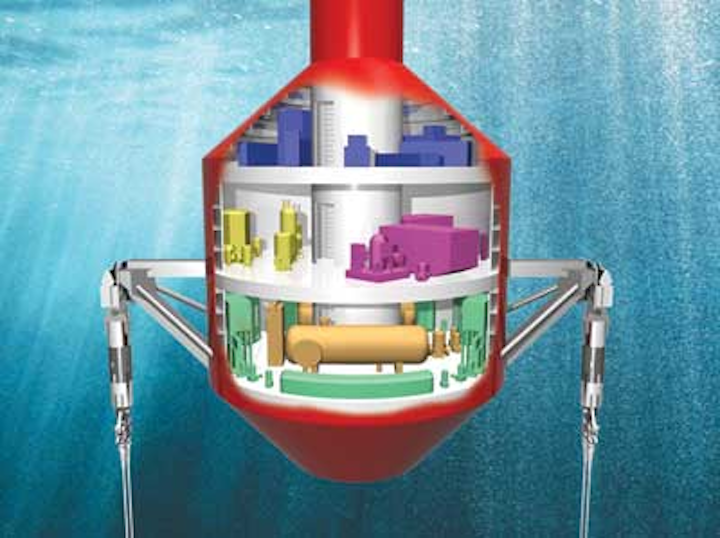 ABTOG estimates the typical cost of constructing and installing a buoy at $140 million. Following depletion of a field within four to five years there would be decommissioning costs, as with any project, but the buoy could be adapted relatively easily for re-use on another field. A buoy designed with a 25-year lifespan could potentially serve four different projects.

Each candidate field would be assessed for its oil volumes and varying fluid characteristics, with the process system designed accordingly. Depending on the number of wells drilled, the buoy could be economically configured to produce just 1,000 b/d, Minty claimed. In its present form the concept is focused on oil fields with limited quantities of associated gas. "Obviously we would try to use as much of the gas as possible from the outset. At this time we are not looking at pure gas fields, although there are a significant number of marginal gas fields worldwide."

ABTOG obtained its first licenses in the UK's 27th offshore licensing round. The applications focused on acreage containing discoveries or known prospects that would not be commercial using conventional solutions. Criteria included remoteness from infrastructure, and a physical environment appropriate for development using a production buoy. These licenses contain the Phoenix discovery and the Malvolio prospect, with combined resources estimated at 65 MMbbl. Azimuth agreed to farm in to the exploration areas of both blocks earning a 50% interest in these areas by assessing the hydrocarbon potential and funding associated geological, geophysical, and reservoir studies.

Last July a more immediate development opportunity arose when ABTOG concluded a farm-in deal with Antrim Energy to earn the right to a 50% interest in license P077, which contains the Fyne oil field and surrounding acreage. In exchange, ABTOG would fund the preparation of an amended field development plan for Fyne, with Wood Group PSN performing pre-front-end engineering and design and FEED studies.

Fyne was discovered by Mobil in 1986. Eventually Calgary-based Antrim Energy acquired the field and, following an appraisal campaign, farmed it out to Premier Oil. Various attempts at development foundered due to project economics. One of Antrim's previous concepts was to use the Sevan Marine-designed cylindrical FPSO tied in to two subsea production wells and one water injection well.

One of the main attractions for ABTOG was the fact that the field had been extensively appraised, with three wells testing at rates of up to 4,000 b/d of oil. This reduces the perceived production risks associated with a previously untried concept, Minty explained. The partners on Fyne aimed to submit the environmental statement to Britain's Department of Environment and Climate Change (DECC) by the end of March, to be followed by a field development plan submission late this summer.

Looking at the UK continental shelf from a wider perspective, Enegi has identified 88 undeveloped fields each with reserves of 15 MMboe or less, so there is scope for participation in other projects. The company claims the current studies have attracted widespread interest from operators in the region. Many of the potential developments could benefit from the UK government's small field tax allowance that provides an incentive to develop these smaller fields. Worldwide, ABTOG has identified more than 600 projects potentially suited to a production buoy, based on analysis of Infield Systems' global database. Criteria include reserves of less than 45 MMboe and water depths to 600 m (1,968 ft).

The first of these could be in the North Celtic Sea off southern Ireland. Last November, ABTOG struck a deal with Providence Resources and Lansdowne Oil & Gas. This gives the company the right to earn an interest of up to 50% in the Helvick and Dunmore discoveries in return for a three-stage work program, leading potentially to submission of field development plans based on an assessment of commerciality.

Helvick, an oil and gas field 36 km (22 mi) offshore in block 49/9, was discovered and appraised during the 1990s. As new operator, Providence drilled a fourth appraisal well in 2000 which flowed 5,200 b/d of oil. However, the field's reserves and remote location did not justify development. Eight years later Providence drilled an appraisal well on Dunmore, another 1980s oil discovery 20 km (12.4 mi) north of the Hook Head field. The well encountered a previously unknown oil-bearing carbonate interval. Here too reserves are modest, but along with Helvick, could form the basis for a small field development portfolio in the North Celtic Sea.

"Traditionally this industry has been very adverse to applying 'new' technology," Minty said. "But this isn't. It's an 'appropriate,' fit-for-purpose concept that uses existing technology to make marginal fields work…I can't see anything insurmountable in what we're doing."

Part of the attraction to the partnership and investors, he added, is that Wood Group PSN would act as duty holder, providing remotely controlled operations and maintenance of buoys and associated facilities. "They have a huge resource of engineers that could find ways to increase the level of remote control and operation of offshore infrastructure.

"One current focus is to make the system robust enough to minimize the need for intervention," he added. Another, addressed in the engineering studies for the Fyne development, was the installation method for the buoy – this could be performed using a relatively small vessel to reduce costs.

ABTOG has also signed another exclusive agreement with GMC to jointly develop applications for the latter's self-installing buoyant offshore platform concept, which is based on cell spar technology. GMC was part of the team that designed and built the buoyant tower for BPZ's Corvina field offshore Peru.

"If Sir Ian Wood's recommendations are implemented, there is the potential to deliver an additional 3-4 Bboe over the next 20 years worth around £200 billion [$334 billion] to the UK economy," Minty said. "Given that a large number of these fields are considered marginal, we are confident that ABT Oil & Gas could play a significant role in the North Sea's future."