In June, Total started production from CLOV, its fourth large-scale deepwater development in block 17 offshore Angola. The basic concept follows the previous three models, with produced oil and gas routed via a network of subsea wells and interlinked flowlines to a spread-moored FPSO. CLOV is the second project after Girassol to connect the risers to the FPSO via hybrid riser towers designed and supplied by Subsea 7, the sole specialist in this technology. 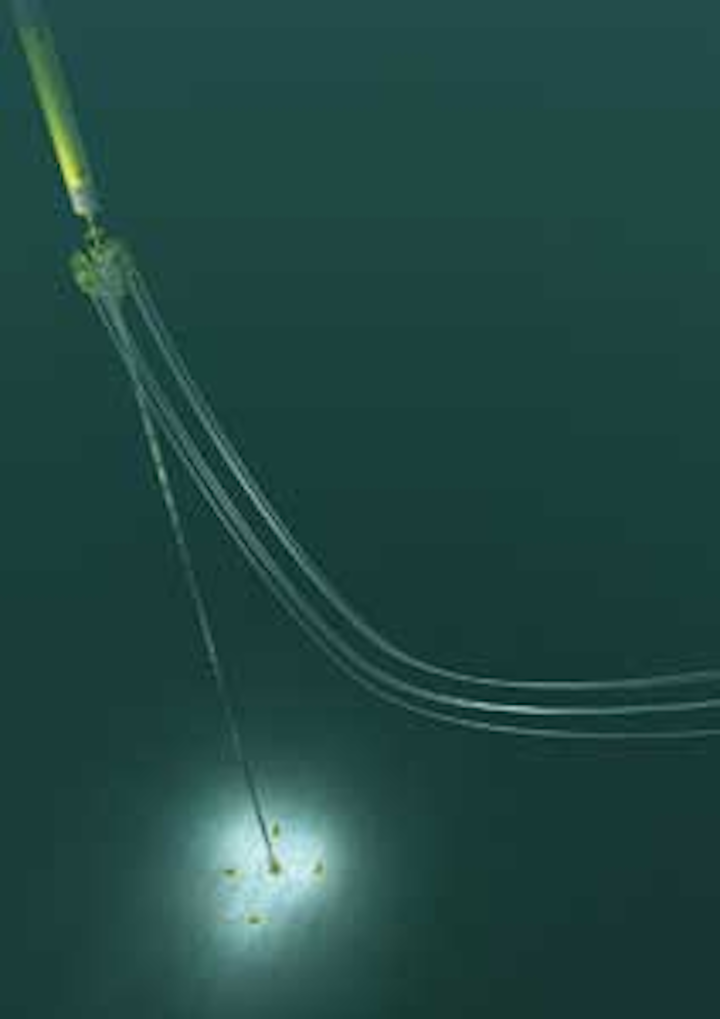 In June, Total started production from CLOV, its fourth large-scale deepwater development in block 17 offshore Angola. The basic concept follows the previous three models, with produced oil and gas routed via a network of subsea wells and interlinked flowlines to a spread-moored FPSO. CLOV is the second project after Girassol to connect the risers to the FPSO via hybrid riser towers (HRTs) designed and supplied by Subsea 7, the sole specialist in this technology.

Acergy (later merged with Subsea 7) pioneered the HRT concept in the late 1990s for Girassol, Angola's first deepwater field project, where three HRTs were successfully connected to the FPSO and remain in service today. The HRT is a free-standing tower that bundles together risers of varying diameters and functions to form a pliant structure. At the tower's base is an interface structure that connects the risers to the flowline spools. The bottom of the tower is anchored by a flexible joint to a locking device, securing the entire structure to the seafloor. The top of the riser tower bundle is connected to a buoyancy tank that maintains tension in the structure, and the top ends of the risers are linked via flexible jumpers to the FPSO.

Each HRT is designed for optimum flow assurance, taking into account reservoir pressure, temperature, and heat transfer characteristics. Other advantages, according to Subsea 7, include a simplified field layout, with no interference between the various risers, and easier offshore installation. Traditional deepwater flexible and rigid steel catenary risers (SCRs) both require heavy construction vessels to support the weight of the pipe during installation.

These were some of the issues that persuaded Total and its partners to opt for a new concept for Girassol. Another was the fact that the towers would be assembled locally at the purpose-built Sonamet fabrication base in Lobito. In recent years local content has become increasingly important to Angola's government, and was a critical factor in Subsea 7 winning the bid competition for CLOV. Outside block 17, the company has supplied a single HRT for BP's Greater Plutonio FPSO in block 18, and the concept was under consideration for Total's ultra-deepwater Kaombo project in block 32.

Subsea 7 installed most of the subsea facilities and the pipeline network, comprising 40 km (25 mi) of pipe-in-pipe (PIP) production lines, 60 km (37 mi) of water injection (WI) lines, and 32 km (19.9 mi) of gas export lines. Produced gas is exported to the LNG liquefaction plant onshore Angola. Another feature of the development is the use of a subsea multi-phase pumping system to allow production of light and heavier crudes from Oligocene and more viscous Miocene reservoirs.

Approximate weights in air of the three main components of each riser tower are:

Both riser towers have the same general cross-section. The main differences lie in the diameter of the risers and in the fact that the inner pipe of the production riser in the Cravo/Lirio (CL) riser tower includes a layer of corrosion-resistant alloy on its internal wall.

For both riser towers the bundle comprises:

Total's insulation requirements for the riser towers were as follows:

"In the event of an unplanned production shutdown duration exceeding the 13-hr design cooldown time," Proust explained, "the production system (risers and pipelines) is preserved by circulation of dead oil. This circulation operation is performed from the FPSO, thanks to the production loop architecture selected for the development."

Proust noted that "there is no active heating system in the CLOV HRTs," but adds that Subsea 7 is developing electrical heat traced and direct electrical heating for both pipelines and riser systems. "Active heating allows a significant reduction in the length of the flowlines and the number of risers needed on a field, as there is no requirement for a production loop," said Proust. "With active heating, a production line can be preserved during a shutdown by maintaining its temperature above the critical value with regards to hydrates."

CLOV's U-value, design pressure, and design temperature requirements are not particularly stringent in terms of a West Africa deepwater project, Proust notes. "However, the HRT system does facilitate use of more stringent design criteria, such as a lower U-value (e.g. with a dry pipe-in-pipe); a higher design pressure and temperature (with large pipe wall thickness or high-strength steel, and a large range of thermal insulation materials). Both aspects are easily applicable thanks to the fully onshore fabrication of the HRT."

According to project director Michel Mugnier-Pollet, Subsea 7 implemented some improvements to the riser tower fabrication process at Lobito for this project. These included maximizing construction onshore to avoid use of cofferdams as on previous projects.

"The railway on which the bundle sections are assembled onshore plunges into the bays through a wet dock. The dimensions of the top and bottom structures of the riser towers designed for CLOV meant these structures were too wide to pass through the initial wet dock inherited from previous projects such as Greater Plutonio. There were therefore two possible options:

The CLOV HRTs incorporated other new features such as polyurethane guide frames to secure the risers to the central core pipe, reducing the amount of steel required for the towers by around 300-400 metric tons (330-441 tons), with similar savings in the weight of the buoyancy foam blocks distributed along the HRT bundle. As a result, offshore installation was faster and safer, Mugnier-Pollet says.

The riser tower bundle is manufactured in sections of roughly 220 m (722 ft), the assembly of each section being as follows. Trolleys designed to support the bundle section are positioned on the assembly railway at each guide frame. Guide frame bottom clamps are installed on the trolleys. The string of the bottom WI riser is landed onto the clamps. Buoyancy foam bottom modules and the bottom-half guide frames are then installed on the top of the WI string.

After each 220-m section is completed, it is tied to the previous section (or to the top structure for the first bundle section), and pulled in the bay at Lobito to free the bundle assembly area for the next 220-m long section. This process is repeated for each of the five bundle sections. Finally, the bottom structure is positioned on the launching railway and tied-in to the last bundle section, ready for the final pull and launch into the bay of the complete bundle assembly.

Subsea 7's construction vesselSeven Borealis installed the rigid pipe spools at the HRT bases (four spools per HRT) in two campaigns. Installation of the HRTs was performed by two Maersk tugs (one lead and one stern tug) and the Subsea 7 construction vessels Seven Eagle and Simar Esperança. Both were towed horizontally from Lobito Bay and upended on arrival at the field. "The first operation once the HRT has reached the site is to connect it to the foundation," Mugnier-Pollet says. "Then it is upended and connected to the HRT top structure, followed by connection of the flexible pipes between the top structure and the FPSO.

"Early on in the design phase we had planned a new diverless, automated clamp connection method for the connections between the flexible jumpers and the riser extremities on the HRT top structure; however, we ended up reverting to the conventional, field-proven method using divers, as with Girassol. We realized it would be too difficult to develop a new process in the time available, and in this case the water depth for the installation of 120 m [393 ft] was within diver range."

Subsea 7 has equipped each of the HRTs on CLOV with an automated monitoring system that records the following data:

Both HRTs are designed for the life of the project, with ROVs performing inspection, repair, and maintenance on site.

The company will continue development of the concept, Mugnier-Pollet said, with interest growing for the next wave of Angolan projects in water depths down to 2,000 m (6,562 ft). "In ultra-deepwater, where stresses on the FPSO hull are greater, the concept works even better, because unlike free-hanging flexible and steel catenary risers, the tower is a self-standing structure."