The energy industry, a strategic resource for security of supply across Northwest Europe, is faced with increasing commercial and technical challenges to explore for and produce oil and gas. 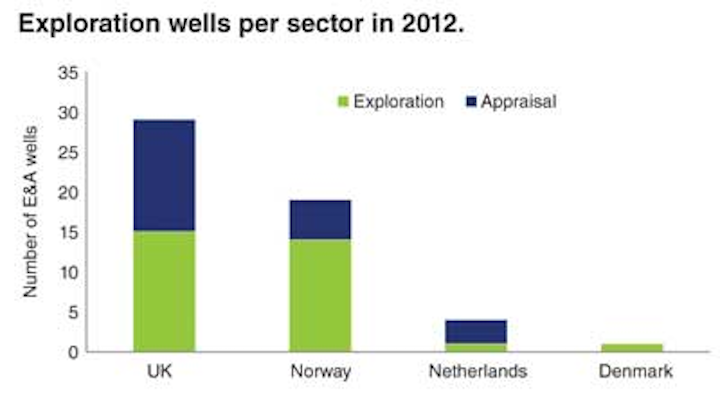 The energy industry, a strategic resource for security of supply across Northwest Europe, is faced with increasing commercial and technical challenges to explore for and produce oil and gas. These include an extended period of economic turmoil, declining production, and rising costs. However, sustained high oil prices, and incentives such as the UK government's recent field and tax allowances, are stimulating exploration drilling and development.

During the first six months of 2012, a total of 53 exploration and appraisal (E&A) wells were spudded across the UK, Norway, the Netherlands, and Denmark, compared to 54 spudded over the same period last year. Of those drilled so far in 2012, 31 (59%) have been exploration wells and the remaining 22 appraisal wells (41%).

Following the low levels of drilling during the winter months of the first quarter, activity on the UK continental shelf (UKCS) and the Norwegian continental shelf (NCS) during 2Q 2012 have picked up to more consistent levels. The depressed activity earlier was due to the current economic and market factors, rig and crew availability, and adverse weather conditions affecting operations, with a number of rigs unable to move off locations following the completion of drilling operations.

Compared with the first six months of 2011, the UK has seen an increase of nine exploration and appraisal wells, while those drilled offshore Norway decreased by six. The Netherlands has seen a decline of three wells, and Denmark has had one well drilled in the same period.

Drilling levels across the UK and Norway are expected to be relatively high throughout the summer months. There are at least 10 proposed drilling locations for exploration and appraisal wells in the UK for the remaining half of 2012. Offshore Norway, there are plans to drill six exploration wells.

Between January and June of this year, 44 exploration and appraisal wells were completed across the NCS, including wells spudded before the start of the year. Of these, 13 (30%) encountered hydrocarbons and can be classified as successful. May brought the highest number of completions, although only two of these wells successfully discovered hydrocarbons. Of the 13 discoveries in 2012, nine wells encountered oil and the remaining four encountered oil and gas. It should be noted, however, that a number of the completed well results have yet to be announced by their respective operators or partners.

Since 2009, the number of fields approved for development by the Norwegian and UK governments has increased. In 2009, only eight fields were awarded development approval, but last year 18 projects were approved. In the first six months of 2012, 12 fields have been approved – a positive indicator for the future of the industry across the North Sea.

Despite the maturity of the region, a range of companies have committed to making significant investments in the area in the coming years, thus highlighting the confidence in the region's oil and gas potential.

The correlation between field development approvals and the oil price has been strong since the financial recession in 2008. As the oil price has increased, so has the number of field approvals. With the sustained high oil price and the evolution of new technologies, companies are now able to develop what would in the past have been considered sub-commercial developments. These factors, coupled with the announcement of decommissioning tax relief by the UK government in the March 2012 budget, should incentivize further investment and greater commitment to development in the North Sea.

During the first half of 2012, three Norwegian fields came onstream. First was the BG-operated Gaupe in the North Sea in March, followed by Marulk and Oselvar in April, respectively in the Norwegian Sea and the North Sea. Five fields in the UK started production during the second quarter of 2012, namely Bacchus, Islay, Lybster, Athena, and Ensign.

There are positive signs. The total of eight new fields onstream is higher than the total number of field start ups in 2011 and more than double the number of fields that came onstream in 2009 and 2010.

The majority of field start ups were located across the Central Graben, Moray Firth, and northern North Sea basins. Outside these areas were the Centrica-operated Ensign, and the ENI Norge-operated Marulk gas fields located respectively in the UK southern North Sea and Norway's Voering basin.

In May 2012, DECC announced that the 27th licensing round had attracted the largest number of applications received of any UK bid round to date. A total of 224 applications were submitted covering 418 blocks on the UKCS, 37 more applications than the previous high established in the 26th round. The increase may partly have been stimulated by more favorable tax and field allowances announced in the 2012 budget.

The 27th round has attracted seven frontier license applications compared to three in the previous round, underlining the interest in frontier areas such as west of Shetland. Compared to the number of applications made last year, there has been a reduction in the number of promote licenses in favor of traditional license applications. Promote licenses are designed to allow small and start-up companies to enter a production license and attract the necessary operating and financial capacity at a later stage. The decrease in applications of this type shows that large players are still willing to invest in the North Sea.

The results of the 27th UKCS licensing round and the Norwegian APA 2012 are expected later this year and following the high number of applications, results will be greatly anticipated. A high number of successful awards could result in a positive number of well commitments to ensure exploration activity continues across the region in the coming years. Exploration may spread into areas previously considered underexplored such as west of Shetlands and the Barents Sea.

In the UK, the positive announcements in the budget 2012 with regards to the decommissioning tax relief may also help to stimulate activity. Companies hope to be able to recover cash flow currently tied up in financial guarantees related to decommissioning, and direct these funds to exploration and appraisal.

In Norway, a number of factors suggest that levels of exploration and appraisal activity will remain attractive and consistent over the coming years. The Norwegian government currently offers favorable conditions for exploratory drilling. Companies are able to claim 78% of their exploration costs in a dry hole case, substantially reducing the risk associated with drilling new exploration wells. Furthermore, unlike the UK, Norway is viewed as a fiscally stable regime, although companies still have to consider the higher overall tax regime.

Increasing demand from China and other emerging economies, coupled with political upheaval in North Africa and the Middle East, and the ongoing Eurozone crisis, has resulted in a sustained high oil price. This has had a positive effect on the industry, encouraging investment as manifested by E&A drilling and field development activity.

One limiting factor on drilling activity in the region is the fierce competition to secure rig slots across the North Sea. According to published reports, average rig utilization across the North Sea in the first half of 2011 was 79%. This has now increased, with 2012 levels for the same period at 88% utilization.

As technology develops and the complexity of rigs follows suit, there will be a challenge to hire technically qualified personnel to operate the rigs. The next generation of drilling rigs will be technologically more advanced following ongoing improvements, so there will be a need for more highly trained crew.