In Enventure's first-ever application of solid expandables in a horizontal well in the delta region off Nigeria, the company acquired a number of lessons. Expandables were installed in three wells for Shell Petroleum Development Co. of Nigeria Ltd. (SPDC): Nembe Creek 23, Agbada1, and Caw-thorne 46. 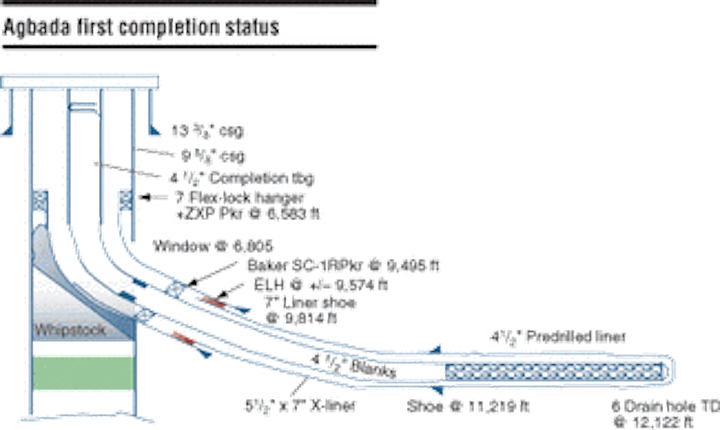 In Enventure's first-ever application of solid expandables in a horizontal well in the delta region off Nigeria, the company acquired a number of lessons. Expandables were installed in three wells for Shell Petroleum Development Co. of Nigeria Ltd. (SPDC): Nembe Creek 23, Agbada1, and Caw-thorne 46.

Greg Noel and Eduardo Arredondo, onsite Enventure project managers, said that installing expandable tubulars in the nearly-horizontal sidetracks presents its own set of challenges. In particular, Noel said the expansion cone has to travel across the doglegs, through the exit window into the main casing bore, and back to surface without sticking. Because Enventure's technology expands the tubular from the bottom up, there is always the risk that the cone may become stuck.

In the first well, Nembe Creek, the exit out of the main casing bore was very short. Lance Cook, President and CEO of Enventure, said the assembly containing the expansion cone was too stiff to accommodate the doglegs and parted after approximately 2,050 ft of the 3,000-ft liner was expanded.

The expansion assembly was recovered along with about 800 ft of the liner. The liner showed wear where the assembly had been pulled across the short exit window. Cook said the window was cut too close to the casing shoe in the main bore. The casing pipe at that point was very rigid and the tool had to immediately clear the shoulder where the string was hung off.

Because of the schedule on these jobs, the second well was due to be lined on the next day. Cook indicated there was only a short time frame to evaluate the problems encountered in the first job and make corrections that would ensure future success. Digital photographs were e-mailed back to Houston and overseas conference calls set up to discuss the options with SPDC and Enventure staff on location in Nigeria.

Beyond the high-tech global communications, Arredondo said it was helpful to have experienced people at the well site who could make adjustments to the plan. Shell engineering team members specialized in expandable technology made short turn-around plan adjustments on Agbada possible.

A decision was made to modify the bottomhole assembly (BHA) to accommodate the sharp doglegs exiting the casing window on the second job. In addition, a different cone type was used for this expansion - one that Noel said had a different stabilization assembly. "The other well lining, three days later, went off without a hitch," explained Arredondo.

The success of these re-entry wells depended upon the use of expandables. The wells had to pass through completion zones and water zones before leveling off horizontally inside the pay zone.

Cook said a large hole size at total depth (TD) allowed the completion team to run larger production strings and expandable sand screens. In a conventional sidetrack, 5.5-in. tubular would be run through the casing window, followed by a 3.5-in completion string. This would make for a very small production tubular.

At the same time, if something went wrong requiring a contingency string of casing in the stepout, the completion string would be reduced to almost 2 in. Such a small size would not be acceptable, as Shell expected the well to produce 10,000 b/d. For this to happen, a much larger completion internal diameter (ID) was needed.

Using expandables, Enventure was able to enter the 7-in. casing string with a 5.5-in. liner that was later expanded in the open-hole sidetrack. This increased the completion string size to 4.5-in. In addition to this, expandable sand screens were planned for the openhole completion to further improve throughput.

The combination of these two technologies required that Enventure expand the solid expandables bottom up, and the screens expanded top down. Cook said he believes this would be the first project to make use of both products in the same wellbore.

While the Agbada horizontal expansion was a first of its kind and expanded over 1,711 ft of tubular, the Nembe job, if fully expanded, would have set a new length record for solid expandables (measured 3,003 ft). Don Campo, Shell E&P staff drilling engineer for expandable tubulars in the Americas, said this cutting-edge technology could not have made it to Nigeria without good support on the ground.

Although this was the first international sidetrack well Enventure has worked on, Campo said the company did install tubulars in a sidetrack well on Cognac in the Gulf of Mexico. Lessons learned from Enventure's previous 40 solid expandable liners (including eight for Shell) were used in populating Enventure's continuous learning process. Lessons included how openhole conditions, such as differential sticking problems, and extreme doglegs, affect the expansion process.

As a result of changes on the Agbada well, the two other Nigerian jobs were performed without incident. Enventure is taking advantage of the current downturn in the service sector to hire additional engineering and operations staff.

As the technology progresses, one of the company's goals is to develop a system that is robust enough for anyone to operate. In the meantime it will require what it says are "seasoned professionals," who can identify the cause of problems and develop solutions quickly on-site.