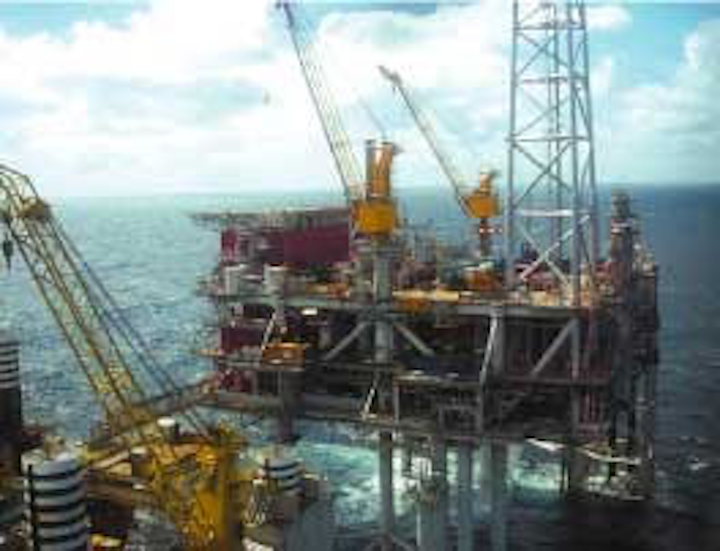 Statoil submitted its long-awaited development plan for the Kristin Field off Mid-Norway. The plan will be the region's second major gas-gathering hub, after Åsgard. It will also be Norway's first high pressure, high temperature (HP/HT) development to employ subsea wells (12), in this case-tied back to a semisubmersible production platform with full processing facilities. This will be effectively a smaller version of theÅsgard B semisubmersible (also a Kvaerner/GVA design), capable of handling 18.7 MMcm/d of gas and 120,000 b/d of condensate.

Construction contracts will be issued from late 2001 onward, with development drilling predicted to start in July 2003. Two drilling semisubmersibles may be contracted for 54 months combined duty. First gas will likely flow during fall 2005, and will be exported through the Åsgard trunkline system to Kaarsto. Condensate could be routed to theÅsgard C storage ship, 20 km to the northeast. Over time, numerous smaller discoveries nearby will be brought into the development, including a recent find named 'M.' The project has an estimated cost at this stage of $1.9 billion.

Åsgard B itself has been shut down since mid-August, following a leak on the gas pipeline linking it with the Åsgard A platform. The cause has been identified as a weld fracture. Statoil and its partners have already assigned $85 million to replace welds on Åsgard flowline hubs found to be below par. Similar problems have come to light on four subsea welds on Statfjord North in the North Sea, causing production there also to be suspended temporarily. However, Statoil denies that this is a field-wide problem, as all its other Norwegian installations employ different kinds of welds.

Nominations for acreage in the Norwegian Sea were due to close September 28, under Norway's 17th licensing round. Blocks offered are in under-explored areas away from the few developed field centers in this region. Prospective reservoirs are assumed to be deep-lying, highly pressured and gas prone.

South of the Halten Bank discoveries, Shell was awarded operatorship a while back from the hotly contested 'President' block 6506/5.

The semisubmersibleTransocean Winner is about to drill the first well on this block targeting an HP/HT prospect. Chevron has also been operating for the first time in unknown territory in the Norwegian Sea, but its well on the Donna West prospect, in 340 meters water depth, found only traces of gas.

To the north, Norsk Hydro's plan to drill close to the fauna-rich Lofoten Islands has been blocked by environmental groups, which also tried to halt appraisal drilling by Agip in the Barents Sea on last year's Goliath discovery. However, in this case The Norwegian Pollution Control Authority (SFT) rejected such action, claiming that Agip's contingency environmental risk counter-measures were actually more thorough than those applied to exploration drilling elsewhere off Norway.

Norway's Gas Negotiating Committee (GFU) agreed to supply 74 km of gas over 16 years to Poland, starting in 2008. Supplies will be brought ashore at Niechorze on the Baltic coast through a new submarine pipeline. However, these volumes alone do not justify a dedicated line from the Norwegian shelf, claims Statoil's Marketing Manager Ole Gabriel Birkland.

The likely solution will be to feed the gas through a new network of trunklines from Scandinavia as further long-term supply deals are concluded. Poland currently relies on Russia for 7 bcm/yr of its annual 11 bcm consumption, the remainder generated from Polish fields. It's possible, however, that the European Union (EU) may challenge the new project, with the GFU about to be wound down. The EU has argued of late that the GFU is a cartel, in contravention of the EU's aims to liberalize Europe's energy markets.

Statoil's first ever well on the Faeroese shelf hit volcanic rock, as predicted, but little else, beyond traces of hydrocarbons. Well 6005/15-1 in license 003 - 125 km southeast of the islands - was targeting the Longan prospect in 935 meters water depth. The well was drilled to a total depth of 4,000 meters, terminating in Paleocene layers. The semisubmersibleSovereign Explorer then moved on to license 001 to drill a first commitment well for the Faeroes Partnership, led by Amerada Hess. The latter has also contracted the drillship West Navion from Smedvig for two exploratory wells next spring in up to 1,200 meters water depth west of the Shetlands.

In more conventional water depths in the Danish North Sea, Phillips found oil with its Hejre-1 exploratory well, situated east of the small Gert Field and north of Denmark's relatively prolific Central Graben. The well was drilled over a period of 4.5 months by the jackupEnsco 70, in 68 meters water depth, to a total depth of 5,265 meters. Phillips did not issue a reserves estimate at the time. Apparently, the oil column was below expectations, but oil quality seemed high. Two other recent Danish sector wells drilled by Maersk in Triassic and Lower Cretaceous plays were dry.

In Dutch block F2a, Veba completed its first offshore development as an operator on the Hanze Field, originally discovered by RWE-DEA in 1996. This was a two-year project based on a production platform with a storage base offloading to a dedicated shuttle tanker, theBetty Knutsen. Initial production of 11,000 b/d of oil should climb to 30,000 b/d by year-end as a further producer and injector are drilled. Hanze is the first chalk oil reservoir to be developed off The Netherlands - it will eventually account for two-thirds of Dutch sector oil production.

TotalFinaElf will swell the nation's gas inventory early next year when it brings onstream the K1 Field, 150 km offshore Den Helder, at 3.6 MMcm/d from two wells. The production platform was installed late August.

Enterprise Oil, Statoil and Marathon are seeking permission to build a gas reception terminal on Ireland's west coast, at Bellanaboy Bridge. This would process supplies form the current Corrib subsea development - seven wells would be tied back directly to the terminal via a pipeline. The partners' fifth appraisal well on the field, completed in July, tested at 30 MMcf/d. Corrib is now thought to house 20-24 bcm of gas, all of which will be shipped through new or emerging infrastructure across Ireland. The field is due onstream in 2003, with a predicted plateau output of 89 MMcf/d.

In August, Ramco Energy spudded its first well on the Seven Heads accumulation off southern Ireland. Recent seismic across the area, previously drilled by Esso and Marathon, suggests potential reserves of 0.5 tcf. The current well, drilled by thePride North Sea rig in 335 ft water depth, has a proposed target depth of 4,000 ft. If Ramco can establish commerciality, it too may pipe the gas directly to the mainland, or alternatively via Marathon's Kinsale offshore platforms to the east.

On the UK side of the Irish Sea, Eclipse Energy and Rolls Royce Power have been awarded provisionally two licenses for two gas discoveries.