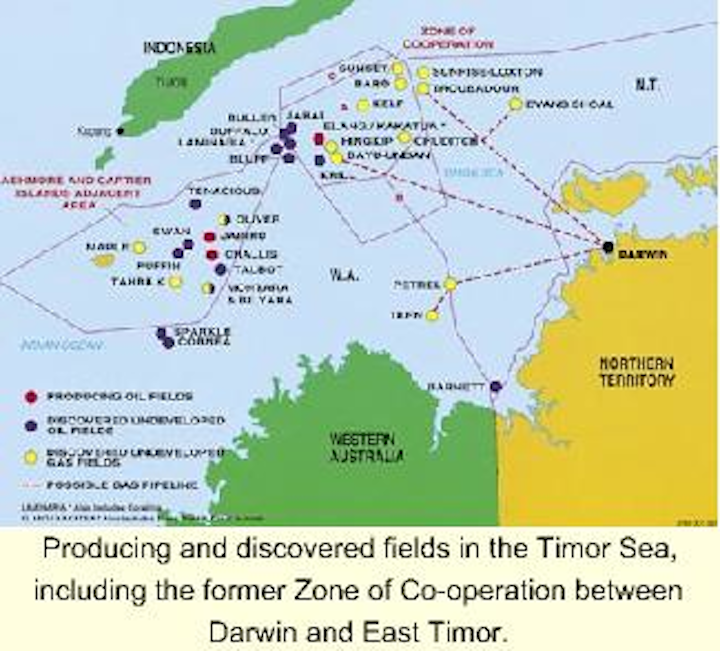 East Timor's independence vote has rendered void the Timor Gap Zone of Co-operation treaty, according to Indonesia's Mines and Energy Ministry. Exploration in the waters between East Timor and Northern Australia would now be a matter for negotiations between the parties concerned, Minister Kuntoro Mangkusubroto declared.

The Northern Territory (NT) government will be hoping for a swift resolution. Over the past four years, 16 oil and gas discoveries have been achieved in the Timor Sea, and a further 140 exploration wells are scheduled there over the next four years, according to Daryl Manzie, NT Minister for Resource Develop ment.

Speaking at September's Offshore Europe event in Aberdeen, he pointed out that the exploration success rate in the sea was one in three wells drilled. Outlay on commitment wells to come over the next five years should total A$1.4 billion, he added, and the government anticipates that over A$16 billion will be steered into Timor Sea development projects.

Gas and LNG in particular are crucial to the NT gov ernment's aims to establish Darwin as a comparable operations center to Perth. Although Phillips and its partners have ruled out LNG as a processing option for the Bayu-Undan Field gas, this is the probable solution for Woodside/Shell's Greater Sunrise and Evans Shoal fields just east of the ZOC. Darwin is the preferred site for a reception and processing terminal. If this project goes to plan, Darwin could become a major LNG provider to China, Japan, Korea, and Taiwan by 2005.

This past June, the Timor Sea Consultative Group issued a report on opportunities for Timor Sea gas-fired power in domestic Australian

markets. The report forecasts a potential annual market of up to 360 petajoules by 2013.

Woodside and Shell are also investigating infrastructure requirements for taking Timor Sea supplies from Darwin throughout the Northern territory and Queensland. The NT government also created an executive forum to ensure that the gas is developed and brought to shore by the end of 2003.

Woodside/Shell's project is known as The Northern Australia Gas Venture. This encompasses the Greater Sunrise fields (Sunrise, Loxton Shoals and Troubadour) and Evans Shoal, all situated in the Bonaparte Basin, 400 km northwest of Darwin. Sunrise and Troubadour were discovered in 1974, followed by Loxton Shoals in 1995, which emerged as ZOC drilling gathered pace. Shell discovered Evans Shoal in 1998. Combined reserves of the four fields are estimated at 15.5 tcf of gas and 160 million bbl of condensate.

In 1997, Woodside initiated a feasibility study for exploiting these reserves through a new 7.5 million ton LNG plant in the Darwin area. The study's first phase, completed last December, predicted overall capital expenditure of A$10 billion, including field development, a long-distance subsea export pipeline to Darwin, a domestic gas processing plant, the LNG plant and storage tanks, and a new 3.5-km loading jetty, capable of berthing two LNG carriers. This would constitute the NT's largest investment project to date. Shell and Woodside also stated their willingness to tie gas reserves held by third parties into the project.

The domestic gas processing plant would supply 400 MMcf/d of gas. Sales could approach A$2 billion annually, with up to 5,100 jobs created locally by 2004. A study by ACIL Economics suggests that in the longer term, the gas could also be exported to markets in southern Australia, where extra supplies will be needed five years from now, according to the Australian Gas Association.

To the NT government's consternation, some Timor Gap projects are still being serviced from Perth. Manzie pushed the point that this equated to supporting North Sea operations from Moscow. However, nascent infrastructure schemes should establish Darwin in time as the Timor Sea's major oilfield services hub.

Among these are a new 1,600 km rail link from Alice Springs to Darwin, which should speed up deliveries of freight from industrial centers in the south. This is due to be completed in 2003. The rail link will terminate at a new deepwater port under construction in two phases at Darwin's East Arm, next to land set aside for port and oil/gas service activity. An oil refinery is also being pro posed for a site in the Northern Territory.

Woodside has chosen the Hudson Creek Industrial Estate in Darwin as its logistics support center for the Northern Endeavor, the world's largest floating pro duction, storage, and offloading vessel (FPSO) with 1.4 million bbl oil storage capacity. This was recently installed on the Laminaria/ Corallina oilfields, 550 km offshore Darwin. Production from these fields should be coming onstream soon.