FPSO market set for revival in next three years

More than 30 FPSO projects could pass final investment decisions during 2019-2021, according to analyst Rystad Energy. 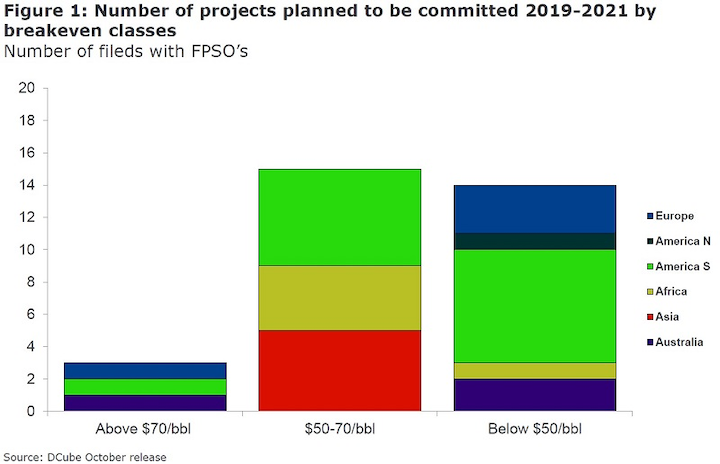 Cost-cutting during the recent downturn have improved the economics of these projects in most cases, with 14 now breaking even at less than $50/bbl, and 15 more come in the $50-70/bbl range, and only three with a breakeven more than $70.

This year, two FPSO projects have been confirmed in the UK North Sea, with Fluor securing the contract for a newbuild circular FPSO forShell’s Penguins project, and Teekay Offshore contracted to re-deploy the FPSOPetrojarl Varg (formerly at the Varg field offshore Norway) for Alpha Petroleum’s Cheviot project.

Other prospective new UK floater-based developments are Siccar Point Energy’s Cambo oilfield west of Shetland, where Crondall Energy is supporting studies that are thought to include a newbuild, redeployment, or conversion.

Bridge Petroleum has submitted a development plan to the UK’s Oil & Gas Authority for its Galapagos project, with an ice-class Aframax-size tanker identified for a hull conversion. To finance the program Bridge is currently farming down the field development.

Offshore Senegal, Cairn Energy and its partners are reviewing tenders for a large FPSO and supporting subsea infrastructure for thedeepwater SNE project, with Cairn having previously indicated that its preferred solution would be a redeployed floater.

Aker Energy now operates the DWT/CTP block offshore Ghana, and is thought to be considering a purpose-built FPSO for the Pecan field development.

Rystad expects Shell and partners to take an FID in 2020 on the deepwater Bonga South-West project offshore Nigeria, adding that the base case is said to involve a newbuild FPSO – however, a tanker conversion could be a fallback option if newbuild costs prove to be too high.

Another Nigerian deepwater project, ZabaZaba, could be sanctioned next year, pending progress on local content regulations and a corruption scandal concerning the OPL 245 production license.

Nigeria’s government requires 50% of module fabrication work and all topsides integration work to be handled domestically, and project bidders must specify their chosen partners and identify which Nigerian engineering and fabrication companies they could work with.

A key challenge going forward for this and all other new FPSO projects will be execution and cost control, the analyst added.