Deepwater pipelines present a unique challenge to pipeline engineers. Such systems are normally laid on the seabed rather than under it (due to the high cost of trenching), and are subject to high pressures and temperatures. A new probabilistic approach provides a wealth of information that can be used to optimize the design solution.

Mitigation measures for buckling, ‘walking’ can often be reduced

Deepwater pipelines present a unique challenge to pipeline engineers. Such systems are normally laid on the seabed rather than under it (due to the high cost of trenching), and are subject to high pressures and temperatures. Pipelines tend to expand when operated at temperatures and pressures that are above the seabed conditions at which they were installed. If the pipeline is not free to expand, it will develop an axial compressive force. While the ends of the pipeline are usually free to expand, the axial resistance provided by the soil beneath and around the pipe will gradually increase with distance from the free end, until the force is sufficient to prevent movement. This condition is described as “full-constraint.” These axial forces are surprisingly high, particularly for HP/HT (high-pressure, high-temperature) pipelines where typical forces range from 100 to 1,000 metric tons of force.

This compressive axial force can be extremely challenging to accommodate. Since pipelines are long slender structures, the compressive force can lead to global buckling of the pipeline. Although global buckling of a pipeline can occur either vertically or horizontally, since the pipes are not trenched, horizontal buckling is almost always observed, when it is known as lateral buckling. Such a lateral buckle can be tens of meters in amplitude and hundreds of meters in length, and can lead to severe local deformation of the pipe, known as local buckling. The concern with a lateral buckle is to control the initial bending strain within acceptable limits and to control the subsequent cyclic loading that occurs with each shutdown and restart, which causes the buckle to move sideways back and forth across the seabed. The high stresses and strains that can develop in a lateral buckle mean that conventional stress-based design is generally replaced by more complex strain-based design.

The only way to prevent global buckling is to lay the pipe perfectly straight or to trench, bury, and rock-dump the pipeline – neither of which are really practical. Consequently, lateral buckling is actually used as a design strategy; lateral buckling is deliberately encouraged to ensure many buckles. This allows the high thermal load to be shared between a number of lateral buckles, rather than be concentrated at one single site. Various reliable methods to trigger lateral buckles have been developed, with a high degree of success (Sinclair et al 2009). These techniques, including snake-lay, buoyancy, and sleepers, seek to improve the reliability of buckle formation by lowering the force at which the pipe buckles and reducing the buckle load in operation. However, such mitigation measures do not come cheap.

The cyclic loading can also cause pipelines to “walk.” Pipeline walking is a ratcheting phenomenon in which the whole pipeline is gradually displaced along its axis, due to periodic changes in operating conditions. These changes are due mainly to cooling and reheating of the pipeline, and can cause differential expansion and contraction along the pipeline, which can accumulate into significant end expansion – several meters has been observed. This can potentially lead to jumper or riser failure. The only way to stop excessive walking is to restrain the pipeline using large anchors, typically of about 100 t capacity (but up to 350 t has been used). 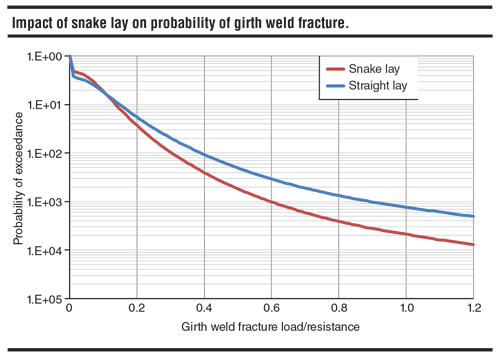 Significant interaction can occur between pipeline walking and lateral buckling, modifying buckle shapes as they shrink or grow and changing the end expansion as pipe is pulled out of lateral buckles to feed the walking behavior. Long pipelines with regular lateral buckles will behave like a series of short pipelines. Thermal expansion and contraction occurs between the buckles, meaning that even a long pipeline can walk. Such walking can cause buckles to grow or change shape, and can affect the walking behavior, increasing the potential for failure.

Understandably, such cases are extremely challenging to analyze due to uncertainties in the response. Uncertainties are a fact of life in the data we design for and the list of uncertainties is long. These include non-linear resistance between soil and the pipe, as it moves in both the lateral and axial direction (Bruton et al. 2008, Bruton et al. 2009); the out-of-straightness in the pipeline, which is unknown until after the pipeline has been installed and even then is subject to survey inaccuracy; the pipeline wall thickness and weight, which varies with fluid density; the predicted number of operating-shutdown cycles; and so on. All these uncertainties must be assessed to define low and high estimates of their potential values for design. 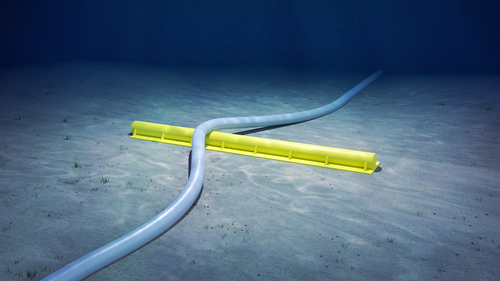 Triggering a lateral buckle on a sleeper.

The uncertainty associated with the lateral buckling behavior of a pipeline means that designs based on a traditional deterministic approach are often extremely conservative. Intervention (such as buckle triggers or pipe anchoring) is often employed to reduce uncertainty in the calculations rather than because they are actually needed.

The obvious way to manage this significant uncertainty is to address the problem within a probabilistic framework. A significant amount of research has been undertaken in this area to develop the PROBE computer program. Using Monte Carlo simulation, this program performs a full structural reliability analysis of a pipeline undergoing lateral buckling. The lateral buckling behavior of the pipeline is simulated many times (typically 106 to 107 times) using different, randomly-selected values of the uncertain variables in each simulation. The program simulates the buckle formation process, calculates the response of the buckles, and develops stochastic information for use in the lateral buckling design process. By counting the number of simulations that lead to an unacceptable condition (for example, a local buckle or a girth weld fracture), the overall probability of failure of the pipeline can be calculated. This can be compared to industry-accepted reliability targets to assess whether the pipeline is fit for purpose or not.

The probabilistic approach provides a wealth of information that can be used to optimize the design solution. Since PROBE is very quick to run, different design scenarios can be quickly compared to allow the designer to fully understand the benefit of additional intervention. In most cases, the probabilistic approach reduces the number of engineered triggers. For one recent project, a deterministic design required 18 buckle triggers – but the PROBE program showed that 15 of these were unnecessary. The probabilistic approach is still novel, but acceptance of the technique is gradually growing. It has been used on numerous projects, and can lead to significant project savings. 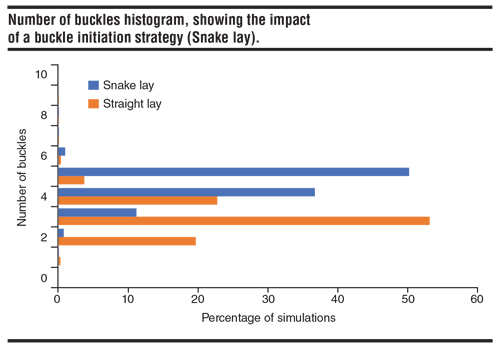 Pipeline walking is even more uncertain than lateral buckling. Walking displacements may vary from a few millimeters to tens of centimeters per cycle. There may be multiple drivers competing in terms of strength and direction (Carr et al., 2006, Bruton et al. 2010), meaning that not only is the magnitude of the walk uncertain, but the direction is too.

Unfortunately, it is not clear that we have the capability to reliably predict how a pipeline will behave. Design predictions almost always employ complex finite element analysis. Modeling many kilometers of pipe over very many shutdown cycles means that simplifying assumptions must be made. As a result, important aspects of the physics may be missed. Confidence in our modelling is really quite low for such an important design challenge. Large suction anchors are the most common mitigation for pipeline walking; but their location and size are based on these uncertain predictions. The anchors could well be too large and be installed in the wrong place. On the back of such uncertain predictions, projects spend millions of dollars that may not need to be spent.

For the majority of pipelines, a more logical approach is to do nothing prior to operation, but to monitor the pipeline behavior and intervene if walking is observed in operation. Of course, for this to work there must be a simple way of controlling the walking should it occur. Retrofitting large suction anchors and attaching them to the pipeline is extremely challenging, so a cheaper and more flexible anchoring solution is required.

To address this, Crondall Energy launched the Joint Industry Project “APT” (Anchoring Pipeline Technology). This is sponsored by three major operating companies and the Oil & Gas Technology Centre. The JIP aims to provide a framework for the “wait and see” approach to walking, where the expectation for walking is uncertain. The aim of APT is to develop simpler anchoring systems that can easily be retrofitted at low cost. This approach will specify what level of monitoring is required and will develop simpler, more radical ways to do this based on small advances to current technology.

A recent example of this approach was seen with the use of the pipe-clamping mattress (PCM), which is a retrofit anchoring system successfully deployed in deepwater by Shell. However, the JIP aims to produce even simpler distributed anchoring systems which are fully installable by ROV. Suitable designs have already been proposed and will be tested in Phase II of the JIP.

Of course, if we could improve tie-in design to handle large end displacements, that would alleviate concerns for pipelines that walk by providing more headroom. Pipeline end expansion and contraction is usually absorbed by expansion spools or jumpers. The loads on these spools and the connection hardware in operation are critical in determining the size of the spool. There is a clear incentive to minimize the total end expansion, to keep the size of the spool to practical limits and minimize tie-in complexity and installation costs. However, if tie-in spools could be better designed to provide greater levels of expansion without compromising the seabed footprint and installation requirements, this would be a significant advantage. Innovative and potentially radical ways to achieve this are already being planned within Phase 2 of APT.

The costs associated with mitigation of pipeline lateral buckling and walking in deepwater are significant. In many cases these costs are due to uncertainty in the design process rather than being a necessary solution. These costs can be reduced by investing in intelligent application of modern analysis techniques and by developing a more flexible approach to uncertain behavior. The industry is starting to think this way, but there is much work still required to get full acceptance of these ideas and realization of the benefits they bring. •