This August, Saipem began removing the first topsides structures from BP’s Miller platform in the UK central North Sea. During its 15-year operating lifespan the facility, located 270 km (168 mi) northeast of Aberdeen, was a key hub for BP, producing 345 MMboe. 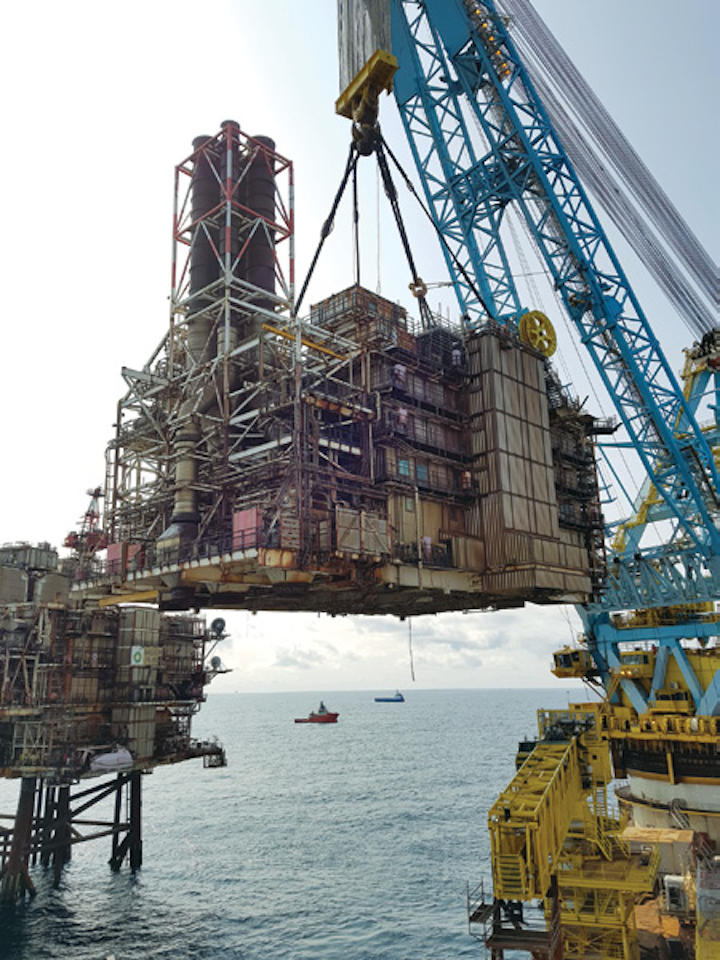 This August, Saipem began removing the first topsides structures from BP’s Miller platform in the UK central North Sea. During its 15-year operating lifespan the facility, located 270 km (168 mi) northeast of Aberdeen, was a key hub for BP, producing 345 MMboe.

BP discovered the field in 1983 in water depths of 100 m (328 ft). Production started in June 1992 through the eight-legged, steel jacket platform, with drilling, production, processing and accommodation modules installed on a module support frame. In 2007, when the field reached the end of its economic oil and gas producing life, BP received cessation of production (CoP) approval from the UK government. Thereafter, a much smaller team maintained and crewed the platform for its new role as the base for the industry Jigsaw offshore search and rescue helicopter (SARH). This arrangement remained in place until 2015 when Jigsaw was replaced with a new industry-wide SARH solution.

Between CoP and 2010, BP spent £170 million ($224 million) preparing Miller’s facilities for final removal with a campaign that involved plugging and abandonment (P&A) of wells and cleaning of the platform topsides. In 2016, the company appointed Petrofac as duty holder to support late life management of Miller, with responsibility for the platform and managing all aspects of the offshore and onshore activities in the run-up to the second phase of decommissioning. Later that year, BP contracted Saipem UK to remove and dispose of the 28,000-metric ton (30,865-ton) topsides and the 18,000-metric ton (19,842-ton) jacket. 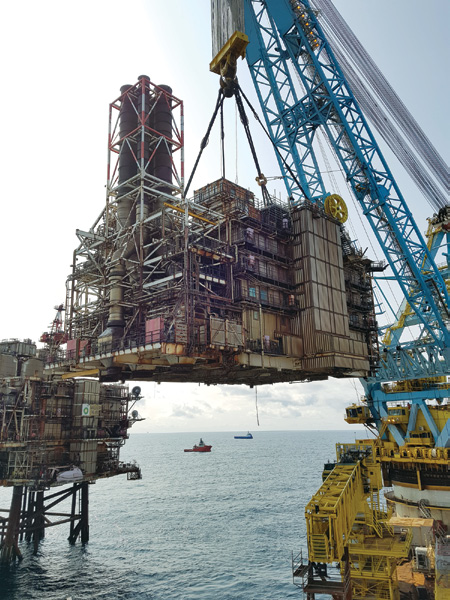 Saipem has been performing project management, engineering, and associated documentation work from its UK headquarters in Kingston, near London. The chosen methodology for the removal operation – reverse installation using the heavy-lift vesselSaipem 7000 (S7000) – has been the most logical and cost-effective for Miller’s design. It minimizes operational complexity and safety risks by removing the need for multiple barge transfers of the cut sections of the platform, allowing these to be transported directly to the quayside for subsequent disposal.

A key feature of the process is that all the modules will be transported either on the deck of theS7000, or suspended in slings from the vessel’s large cranes via the ‘lift and carry’ method. This approach requires access to an ultra-deepwater quayside and port to allow the S7000 to remain ballasted down at transit depth until it has completed offloading operations. Due to the present lack of such facilities in the UK, Saipem has opted to take the Miller sections to the Kvaerner Stord yard in western Norway for final disposal and recycling.

Following last year’s award of the engineer, prepare, remove, and dispose contract to Saipem, preparations started to ensure the platform would be ready for the scheduled arrival of theS7000. In November 2016, a drone survey of the platform provided detailed information of its various structures, particularly in hard-to-access areas. These included the flare tip, drilling derrick, exhaust stack and under deck: the information facilitated verification of existing engineering drawings and documents.

In January 2017, a team mobilized offshore to start onsite preparations for the module-by-module removal campaign. The key components of the preparatory phase were ensuring adequate and safe access to the lifting points of each module, and conducting examinations to verify that the lifting points were in good shape and suitable for the tasks ahead. Most of the original lifting points proved to be sound, and the team’s inspections revealed no defects.

Miller comprises 12 large modules, and with the original lifting points still in place and intact, it is essentially a case of taking the platform apart the same way it was put in. The platform’s design was considered efficient at the time and may even have been devised with ultimate decommissioning in mind.

By comparison, BP’s previous major UK North Sea decommissioning project, the removal of the 28,000-metric ton (30,864-ton) older generation North West Hutton platform in 2008, required 22 heavy lifts and 90 days to remove the topsides. Miller’s topsides can be removed with 12 lifts, over a period of around 30 days.

Another important facet of the preparatory work on Miller was the separation of the modules: each had to be separated from the adjacent modules. Heavy duty bolts connecting the drilling derrick to the drilling substructure and the substructure to the drilling and well bay module were also taken off to ensure easy removal by theS7000’s cranes prior to lift-off. Elsewhere, the cellar deck module will be disconnected from the jacket structure when the risers, caissons, and jacket legs are severed a few meters below deck elevation. Other sections of the platform that have been separated to simplify removal operations include walkways, stairs, pipes, cables and cable trays.

In August, theS7000 arrived at the field location. Then followed final shutdown activities to power down and de-man the platform, and the first of the heavy lifts, including removal of the platform’s derrick top, crane booms, helideck and accommodation module. The vessel subsequently transported these sections to Stord for offload, demolition, recycling, or re-use. Around 97% of the materials from Miller will likely be recycled. A total of five offshore heavy-lift vessel campaign trips are scheduled with removal due to be completed in 2018.

Collaboration has been vital to the success of this project, with the local UK supply chain making a major contribution, adapting skills traditionally applied in exploration and production activity to decommissioning.

Win Thornton is Vice President Decommissioning BP. This is an adapted version of an article published in August 2017 in Decom News by the UK organization Decom North Sea.