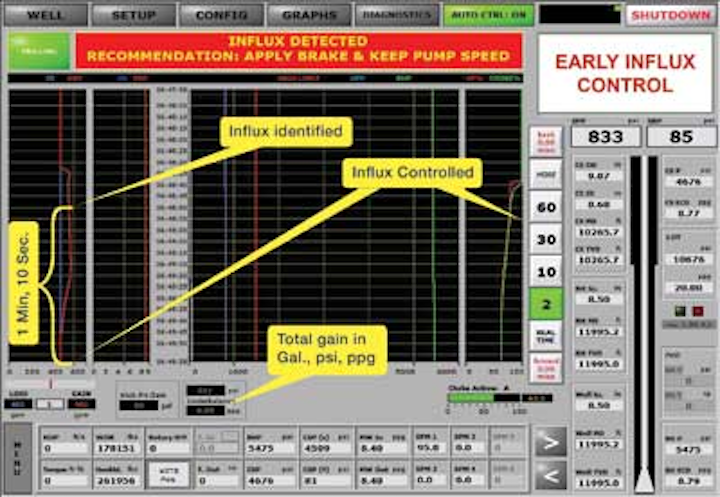 In deepwater and high-pressure/high-temperature (HP/HT) drilling operations, well control and pressure-related problems account for significant risk and cost. Conventional well control procedures based on mud weight and the BOP system are often limited, and in many cases unable to mitigate these challenges. Instead, the solutions to complex pressure conditions are increasingly achieved with managed pressure drilling (MPD).

These solutions are based on a fundamental change in the rig's circulating system, from one that is open to the atmosphere to the precise, real-time monitoring and control of a closed loop drilling (CLD) system. In a CLD environment, MPD provides an exceptional and fundamental advance in the ability to quickly detect and assess kicks and losses at very small volumes. The concurrent ability to control these pressure fluctuations provides the means to prevent their escalation into a well control event.

In deepwater drilling, the degree of information and control afforded by MPD extends to the entire wellbore, providing the means to solve many challenges. One of the most basic is early kick/loss detection and mitigation. Precise detection and control of gas influxes also results in a remarkable ability to mitigate the difficult problem of riser gas. In both narrow drilling windows and HP/HT wellbores, the degree of hazard mitigation achieved with MPD can enhance the safety, efficiency, and ability to drill the well.

Gas influxes, or kicks, are a major source of non-productive time (NPT) and increased risk. Escalation into kick/loss cycles is hugely expensive in terms of time, materials, and risk.

An SPE study of conventionally drilled wells on the UK continental shelf found 45 reported kicks from 2006 to 2008. Forty-two of the incidents referenced kick size. Of these, seven influxes exceeded 25 bbl and three ranged from 140 bbl to 210 bbl. The study noted that the numbers run counter to the often-repeated claim (using conventional systems) that kicks can be caught early, and that influxes greater than 25 bbl are unlikely.

HP/HT conditions were a common characteristic of these wells, with 27 related kicks in 82 total spuds. The study observed that most of the kicks were directly related to geological conditions and mostly involved conditions that were difficult to detect before drilling. Other geologically related incidents included challenges in cementing casing, and maintaining mud weight between an influx and losses.

The geological/geophysical model - the basis for well design - is predictive in nature. Pore pressure and fracture gradient projections are key elements in this pre-drill modeling. But subsurface conditions are invariably different than predicted, and result in a variety of changes to the plan once drilling gets under way. The ability to counter these variations is constrained by a somewhat rigid well design and the inflexibility of the well control elements such as the BOP, mud design, and kick tolerances that are derived from that design. This often yields a slow response. For example, when an influx occurs, information is often limited to the minimal influx pressure based on mud weight and depth. Standard industry procedure is to close the BOP and observe the wellhead pressure in an effort to characterize the nature of the influx. The well is under control but not making hole.

The next step is to increase mud weight and circulate the kick out of the hole. This process often leads to non-productive time and further wellbore complications.

MPD improves on this well control process by continually updating the predictive model to quickly characterize the influx and manage wellbore pressure. This provides a flexible system of prevention and mitigation ahead of conventional well control methods, and enables the mitigation of pressure-related wellbore problems that result in a great deal of non-productive time.

With MPD, modeling is a dynamic process of continuously updating data and controlling wellbore pressures accordingly. Compared to conventional drilling operations, the process provides more data of higher quality in real time at the well site.

Data is acquired from multiple sources while circulating or with pumps off. Temperature, pressure, flow rate, and density measurements are used to calculate mass balance across the wellhead so that any loss or gain in the CLD system is immediately quantified.

Thus, MPD reduces the uncertainty surrounding the predictive model by providing reliable data about the drilling window. The certainty MPD provides about what is occurring downhole makes it possible to differentiate between wellbore pressure variations.

For example, the ability to quickly distinguish a gas influx from wellbore breathing can be significant. A misdiagnosis can be as problematic as a real problem. Correct diagnosis prevents an event from occurring, and avoids missteps that can exacerbate a problem.

MPD provides a flexible response with control and mitigation barriers that are applied in advance of conventional well control. Application of annular backpressure proactively controls and manages pressure variations, such as those that occur during transitions from pumps-on and pumps-off status, to prevent escalation into a well control event. Monitoring and capturing data on a continuous basis also provides feedback for updating pore pressure predictions on the fly, and for modeling future well designs.

If an influx occurs, the system provides mitigation options before changing mud weight or closing the BOP. Detected immediately in volumes as small as a single barrel, the influx is rapidly countered with a change in downhole pressure achieved by applying annular backpressure. The influx is stopped while it is very small and safely circulated out of the wellbore.

For example, automated MPD plays a significant role in successfully drilling high-risk deepwater and HP/HT prospects in the Asia/Pacific region. When a deepwater program with limited pre-drill information faced the potential for severe kick-loss conditions, the drilling plan called for MPD to monitor and manage wellbore pressures. In drilling nine rank wildcats, the system has provided kick detection and mitigation while managing wellbore pressures when drilling, making connections, and tripping.

Identifying and controlling downhole influxes before they dissolve into the synthetic based mud has mitigated the occurrence of riser gas during drilling. The MPD system has also provided formation pressures in real time, and allowed logs to be run in a safe, controlled manner, even in situations that involved severe circulation losses.

The ability to transition between constant bottomhole pressure (CBHP) and pressurized mud cap drilling (PMCD) methods as needed provided the versatility to address different drilling conditions presented by the exploratory wells. Use of MPD methods enabled real-time monitoring and control for early kick/loss detection and mitigation. When drilling the first well, the system detected a 2 bbl influx and successfully circulated it out of the wellbore using conventional well control methods (in other wells, influxes as small as a single barrel have been detected). The MPD control system algorithms detected, minimized, and controlled at least five flow anomalies while drilling the well.

When severe fluid losses occurred deeper in the well, the MPD drilling mode was transitioned to PMCD, which enabled drilling with no returns, and allowed the wellbore to reach the planned total depth.

HP/HT conditions experienced offshore Asia/Pacific had resulted in severe kick-loss conditions and ended in several abandoned wellbores. The use of MPD mitigated the problems and allowed wells to be drilled to total depth. MPD also provided a better understanding of pore pressure and the fracture pressure through real-time dynamic formation integrity tests and dynamic leak-off tests.

A narrow mud weight window between a formation's pore pressure and fracture gradient is a common condition in HP/HT drilling. Variations in bottomhole pressure can heighten the risk of an underbalanced wellbore in static conditions, and increase the chance of fracturing the formation in dynamic conditions.

Wellbore pressure fluctuations in the HP/HT wells were quickly identified in both static and dynamic conditions. Annular backpressure was precisely manipulated to offset these pressure variations and stay within the drilling window. Accurate flow measurement was critical in the constant monitoring and identification of the flow differences, and provided a critical real-time picture of the drilling window.

The complex pressure challenges presented by deepwater and HP/HT wells are a major source of risk and NPT. Kicks and losses often pose challenges that exceed the capabilities of conventional drilling and standard well control measures and methods. To achieve the high level of safety and efficiency needed to drill these wells, wellbore construction is turning to MPD monitoring and control methods to mitigate drilling hazards and reach total depth.