Drilling contractors in the UK North Sea will have to re-assess the stability of their jackup drilling rig installations when damaged, following recent basin tests on a model jackup in Denmark. 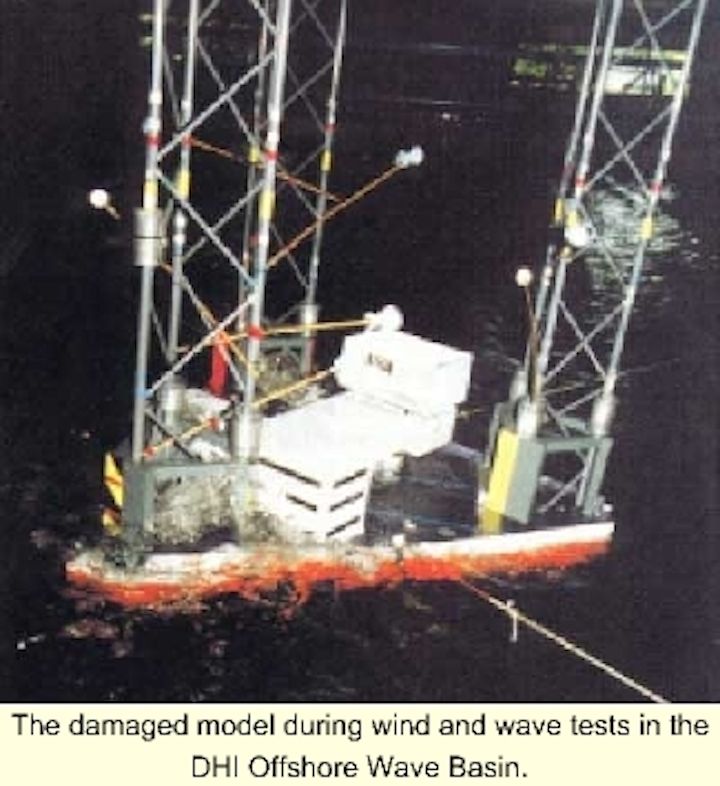 Drilling contractors in the UK North Sea will have to re-assess the stability of their jackup drilling rig installations when damaged, following recent basin tests on a model jackup in Denmark. The study, led by London-based BMT Fluid Mechanics, was examining the behavior of jackups during a wet tow in severe North Sea wave and wind conditions.

The tests were devised by a group comprising BMT, jackup designer Marine Structure Consultants, and the department of Naval Architecture and Ocean Engineering at the University of Glasgow in Scotland. Testing was undertaken in the Offshore Wave Basin at DHI Water and Environment in Denmark, with funding from the European Union.

Small-scale wave basin tests were performed both with the model intact, following simulated waterline damage to corner and side compartments, and following major internal flooding.

The key objectives included assessing the reliability of UK Health & Safety Executive guidance on damage survivability standards, and to improve understanding of factors associated with stability loss and capsizing when a damaged rig is under tow.

The model was derived from a large jackup design, but the compartments were deliberately expanded so that flooding of a single compartment would cause the model to just meet the damaged criteria. Peripheral damaged compartments were located on one side of the model, at one corner, and partly around another side and corner.

The compartments were allowed to flood freely when damaged. A large central compartment was provided that when flooded to two-thirds of capacity, just met the pre-set criteria. Tests were also undertaken with this internal compartment pressed full.

Tests were performed mainly in a simulated 70 knot wind and 12 meter sea state while the model was intact, and in a 50 knot wind and 9 meter sea state when it was damaged. Wind speeds were selected to be consistent with stability criteria. The model's stability margin was ascertained by determining the height through which its center of gravity had to be raised or lower so that it remained just stable for the duration of the program.

In the intact condition, the test model remained stable while complying with the standard criteria. It capsized only after the center of gravity had been raised by 14 meters. The governing criterion was the 30 degrees minimum value of the second intercept angle.

When damaged, the minimum 1.0 area ratio criterion was shown to be governing. Applying peripheral damage to bring the ratio down to 1.0 led to a big increase in the initial static heel angle in wind, and a large reduction in the second intercept angle - cutting the static stability range to 3-7 degrees.

The test model then capsized quickly in the wind and waves. To make it stable for the duration of the tests, its center of gravity had then to be lowered by 1.3 - 4.3 meters. The project team drew the following conclusions:

No single parameter emerged from this study as a wholly satisfactory measure of damaged stability, nor have any alternative criteria been proposed. However, as a result of this work, the HSE will issue a safety notice requiring duty holders to re-assess the damage stability of their installations on the UK continental shelf, in order to ensure sufficient reserve of stability in damaged conditions, and also to withstand predictable environmental forces.

Editor's Note: This is an edited version of an article published in issue 130 of Offshore Research Focus. For more information, contact Bob Standing of BMT Fluid Mechanics: tel +44 208 614 4265; e-mail: rstanding@bmtfm.com