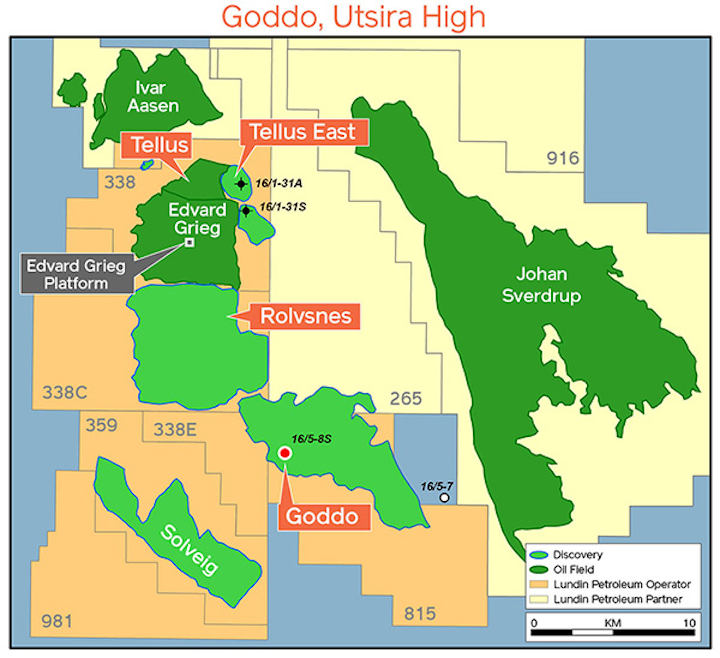 STOCKHOLM, Sweden – Lundin Norway has discovered oil with its latest exploration well in the North Sea, on the Goddo prospect on the Utsira High, 14 km (8.7 mi) south of the Edvard Grieg field production complex.

The semisubmersible Leiv Eiriksson drilled well 16/5-8s, the first in license PL815, the goal being to prove oil in porous basement similar to what Lundin found last year in the Rolvsnes discovery to the northwest. Water depth was 104 m (341 ft).

The Goddo well penetrated weathered and fractured basement in a 20-m (65.6-ft) gross oil column. Analysis based on coring and data acquisition indicates similar characteristics to Rolvsnes, although the two finds are not connected.

Lundin assesses resources from this well at a modest 1-10 MMboe but sees upside potential in the larger Goddo area and surrounding basement.

Forward plans for the Utsira High basement play include the Rolvsnes extended well test with production due to start in mid-2021. Two horizontal wells in the northern part of the Edvard Grieg field already produce from basement, and Lundin’s Tellus East discovery earlier this year has similar reservoir to Rolvsnes and Goddo, and will be developed as part of a future Edvard Grieg infill well program.

The Leiv Eiriksson rig will next drill three exploration wells for ConocoPhillips Skandinavia north of the Utsira High. Lundin has a 20% interest in two of these wells, Enniberg and Hasselbaink in PL917, due to spud during 4Q.

The Norwegian Petroleum Directorate has authorized PGNiG Upstream Norway to use the semisub Deepsea Nordkapp to drill well 6507/5-9 S, the first on PL 838, 4.5 km (2.8 mi) southeast of Aker BP’s Skarv field in the Norwegian Sea.