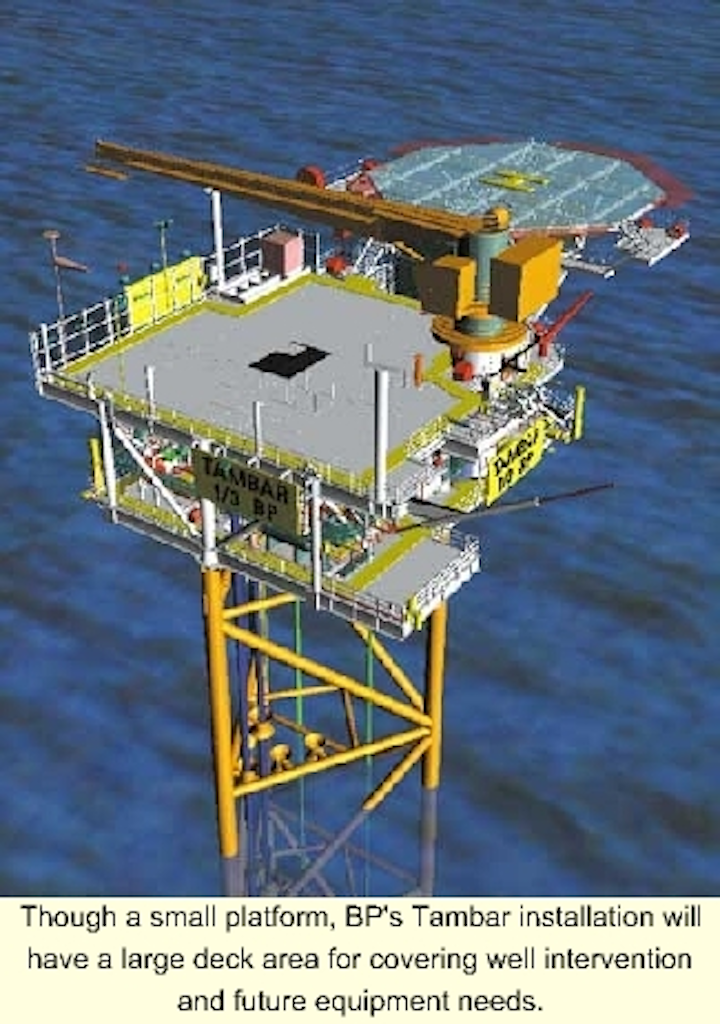 BP Norge's Tambar development project is entering its final hectic stages. Construc-tion of the platform is nearing completion, opening the way to installation in May. Then development drilling will begin, leading on to first oil in July.

At relatively little expense - capital investment is about NKr 1 billion, including drilling - BP will not only give itself access to 41 million bbl of oil production but also provide gas for injection into the Ula reservoir which will enable an additional 20-22 million bbl to be recovered.

The company worked hard to make the development fly, and as project general manager Gro Kielland said, BP now has a very robust project. Tambar was the first project to emerge in Norway after the hiatus in new development activity brought about by the collapse in oil prices in 1998.

The field is being developed with a small wellhead platform housing two wells. With a topsides dry weight of 800 tons and a 1,200-ton jacket, the platform will probably be the smallest fixed production installation in the Norwegian sector. However, the topsides will not look so small, says Kielland - occupying an area of 400 sq meters, it will provide plenty of space for well intervention activity and the installation of equipment such as chemical injection facilities, which may be required in future.

The topsides facilities are much simpler than initially envisaged. Water injection was originally to be used, but it was eventually decided to drop this on the grounds that the benefits of reduced capital costs would more than outweigh the lost production. The option of adding water injection at a later stage is still open.

"We like to say that Tambar is a hydrocarbon-free platform," Kielland says. Under normal operations, no hydrocarbons will be stored on board. Produced oil will be dispatched directly to Ula, electric power will be imported from Ula, and the platform crane is electro-hydraulic.

The topsides have also been designed to be operations and maintenance friendly. A large input in the design came from BP's drilling division, with the result that the dominant feature will be the 50-ton crane that will be used in well intervention operations. Maintenance is considerably simplified as, in addition to the lack of onboard power generation facilities, there is no test separator. Instead two multiphase meters supplied by Fluenta will be installed on the platform, and a third meter installed on Ula.

There is a very simple fire-water system that uses the water-lift pump. In assessing safety requirements evaluators took into consideration the fact that not only will the platform normally be unstaffed, but visits are not expected more than once a month, and will not exceed the duration of a single day. "We have had a very good process with the Norwegian Petroleum Directorate, and they bought into several deviations which we proposed from the normal regulations," says Kielland.

Simple, overnight emergency accommodation for ten persons is provided. In assessing emergency accommodation requirements, the experience with the company's Hod platform was relevant. Hod, which is also normally unstaffed, receives on average one maintenance visit a week. Over the ten years since it came into operation, the number of unscheduled overnights stays has averaged only one a year.

Kværner has an EPIC contract worth somewhat less than NKr 300 million for provision of the platform, which is being constructed at its Egersund yard. It will be installed in early May by Heerema Marine Contractor's crane-barge Thialf.

A smaller lift-vessel could have performed the installation, but an important factor in Kværner's assessment was that the use of a large crane-barge would reduce weather sensitivity at an important stage in what is a tight schedule to the first oil contract date.

Development drilling is due to start in mid-May. Costing some NKr 300 million, this is the most expensive part of the project. It will be carried out by Transocean Sedco Forex jackup Transocean Nordic with its drilling derrick cantilevered over the platform well-bay. The rig will first recomplete appraisal well 1/3-9 as a producer, a job which is expected to take six weeks.

This well will provide first oil and is expected to flow at a peak rate of around 20,000 b/d. The jackup will then drill a new horizontal well, which will take about three months to complete. This well will add another 10,000 b/d to output, and the peak rate of 30,000 b/d should be maintained for two years.

The platform has six slots, so there is spare capacity to drill more wells if required - for example, if water injection is introduced. However, if more wells are required, BP will have to go through a new process with the NPD, Kielland says.

Oil and gas will be transported to Ula via a 16-km, 8-in multiphase flowline. As the reservoir contains high pressures and temperatures - 8,300 psi and 168°C - BP opted to use stainless steel with a 13% chrome content for the pipeline, the company's first use of such a pipeline. BP has enjoyed a good exchange of experience with Statoil, which has several hundred km of such pipeline installed on the Ãsgard Field, Kielland says.

The line will be installed by Coflexip Stena Offshore's reelship CSO Apache, which offers the advantage that the entire line can be manufactured onshore at the latter's Orkhanger base, wound on a single reel and installed without the need for any offshore welding. The line will have a thick layer of insulation, not only to prevent cooling of the contents but also because this metal is very vulnerable to contact with seawater. Once installed, it will be trenched and buried.

CSO Apache will also install the power cable, which is to be supplied by Nexans. Under the same contract it will then install a 27-km, 10-in gas pipeline from Ula to Gyda. This will enable any surplus gas from Ula to be exported to Gyda, which has its own gas export facilities. A water-alternating-gas injection system is used on Ula, for which larger volumes of gas than Ula itself produces are beneficial. Once Tambar gas becomes available, gas surpluses might occur.

Modifications on Ula, including the riser tie-ins, will be performed by the maintenance contractor, Aker Offshore Partner.

The Tambar partners are BP, with 55%, Pelican, which last year acquired Shell's 15% stake, and the State's Direct Financial Interest, with 30%.