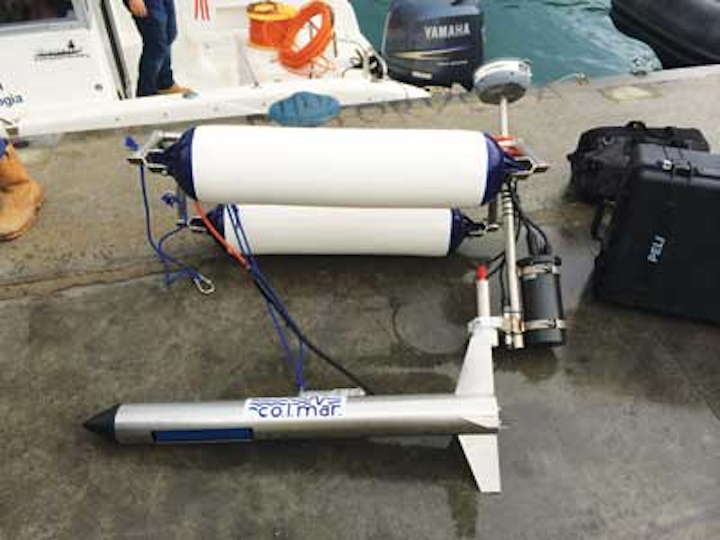 Pipeline leaks are typically triggered by the transition of the transported fluid from the internal pressure to the lower external pressure. The resultant turbulence and fluid mass expansion generates acoustic (ultrasound) signals that the acoustic leak detector (ALD) system extracts from the ambient noise, even when these signals are weak. Co.L.Mar says the system can locate leaks on an offshore installation down to 0.1 liter/min.

The main components of the technology are an underwater acoustic sensor that acquires data along the pipeline, a transmission line relaying the data to the surface vessel, a hardware receiver, and PC-based software that evaluates the signal in real time along with its development along the pipeline section tracked. ROV installation, towfish, and diver have been the most common deployment alternatives offered. Now Co.L.Mar has introduced a new inspection technique.

In 2013, the company's first ALD prototype for installation on an AUV underwent successful trials in a test pool and at sea. This version was designed for recording inspection data which then needed to be played back after the vehicle had finished its mission to check for signs of a leak.

This year, the company continued its participation in a project designed to improve AUV capability in inspection and monitoring of offshore oil and gas installations. One result was the testing and validation of the ALD-AUV system. Extensive trials in Sweden and in the Caspian Sea brought very positive results, according to managing director Luigi Barbagelata. "It was possible to verify the capability to detect a signal generated by a leak – 1 mm methane leak at 2 bar [29 psi] differential pressure – which was much smaller than the original target.

"The low background noise allowed us to reach a better sensitivity than that achieved while working with an ROV. Also the system proved to be robust and reliable during tests in different conditions. Following the positive results, the consortium decided to proceed with inspection of some operating pipelines in the Mediterranean Sea." The program started last month.

Co.L.Mar is now developing software to process the data in real time during the AUV inspection and determine on the spot if a leak has occurred. The ALD will then interface with the vehicle's navigation system accordingly so that, when required, the vehicle will be able to modify the mission to revisit a suspect point and confirm the anomaly detected.

"The latest trials were very promising and successful," says Barbagelata, "although not applied on a pressurized pipeline. The ultimate aim of the project is to develop a vehicle to monitor integrity of deep-sea or remote installations and pipelines." For this purpose, the AUV would be maintained year-round at a remote docking station on the seafloor, awaiting deployment when required. The system could suit inspection of pipelines in Arctic regions, he adds, where surface ice build-up is too great to admit vessels deploying ROVs.

This year Co.L.Mar was asked to perform an investigation of a hydrocarbon leak from a pipeline in an ice region where the outside temperature reached -40°C (-40°F). This involved drilling holes through the ice at various locations and manually lowering the ALD sensors through the hole. Measurements were completed within a few minutes, after which the process was repeated at a new location 10 m (33 ft) distant in order to compare readings. "We had tested our system in very low temperatures in our headquarters in Italy, but for this application we had to change some components and test some parts of the equipment to see if they could withstand such low temperatures."

As part of the same project, Co.L.Mar adapted its equipment for a shallow-water pipeline survey. "We developed a small catamaran to be towed by a vessel, to be equipped not only with our acoustic sensor but also with a commercial sensor for hydrocarbons and methane detection, which we integrated into our equipment."

"Because of possible interference in noise and flow, the surface (host) vessel could not be too close to the acoustic sensor which needed to operate near to the surface. Our solution was to equip the catamaran with a GPS antenna with a wireless link to the vessel, with a physical distance maintained from the vessel of 30-40 m [98.4-131 ft], depending on conditions."

Recently, the company was asked to investigate a leak reported from a complex subsea structure in a water depth of more than 1,000 m (3,281 ft). This involved deployment of the deep version of ALD to be installed on a workclass ROV. "It was not a big a leak, around 30 liter/min. We started to inspect the most critical parts of the installation and within a few hours it was possible to locate the leak on a flange. Before the ALD inspection could start the ROV went for a visual survey of the area, but no sign of dye could be detected."