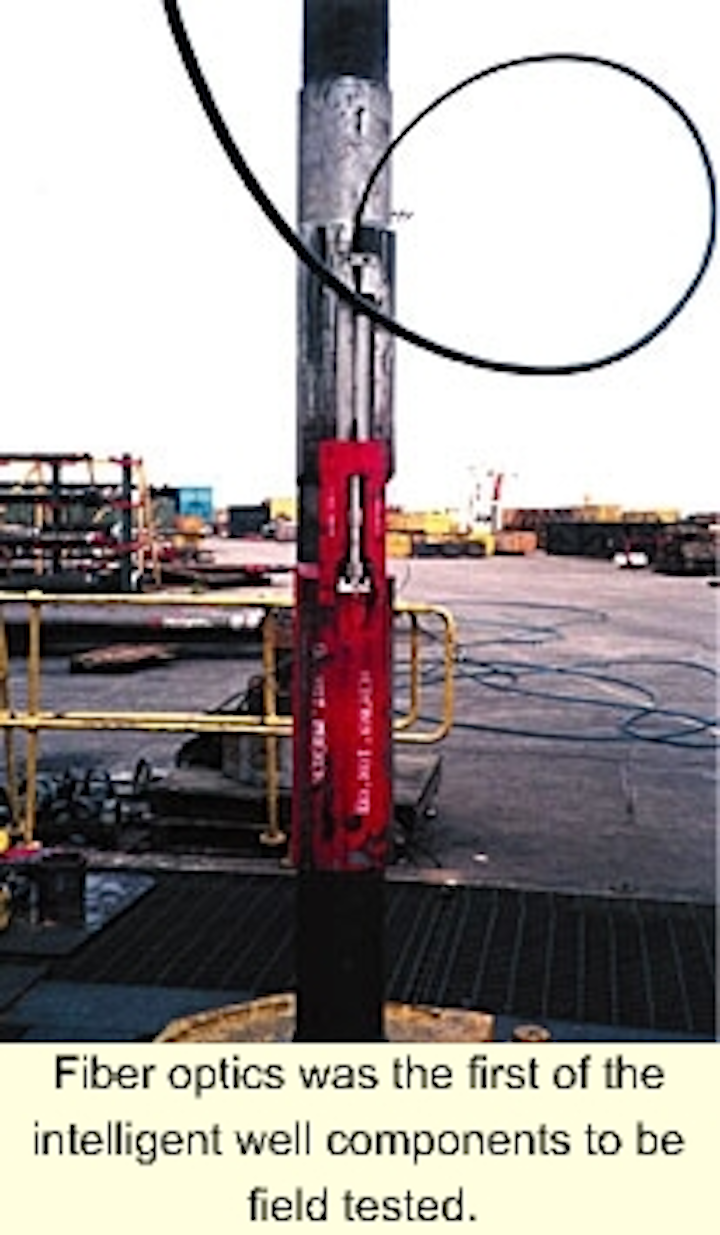 When Halliburton bought Dresser in 1998 the decision was made to discontinue the Dresser ABB intelligent well project in favor of Halliburton's existing PES program. Rather than seek out a new partner, or cancel the project, ABB chose to go it alone. ABB signed a licensing agreement for the choke design Dresser was developing and set out to develop the concept further and build a fully integrated intelligent well system in-house.

ABB was already working on high temperature electronics, fiber optic sensors, and umbilical technology for a number of industries outside the oil business. This allowed ABB Offshore Systems (a division) to call on existing research and development to fasttrack its system.

The resulting development is ABB's downhole monitoring and reservoir control [ADMARCtrademark] system. ADMARC is the latest addition to a number of intelligent completion systems on the market. Brian Drakeley, Business Development Manager of the Reservoir Management Solutions business unit for ABB Offshore Systems, said the system includes downhole sensors for measuring pressure, temperature, flow rate, and water cut. It also features a downhole choke for controlling and balancing flow between different zones such as production and injection zones.

ABB is developing the major components of this system in house, but plans to use packers developed by Weatherford International. Drakeley said Weatherford has a single-string, hydraulic set packer with enough feed-throughs to handle the umbilical ABB will use in the system. The umbilical passes through the top of the packer, which can carry five feedthroughs up to 3/8-in. in diameter.

The umbilical is a key component to the intelligent well system. It allows power - electric, hydraulic, or both - to be transmitted downhole from the surface to actuate the chokes. The umbilical also carries pressure, temperature, and flow data back to the surface.

The ABB subsidiary, Norsk Kabel, is in the cable business and has subsea experience that translates well for this project, Drakeley said. Norsk Kabel has built the umbilical for this system. A wet-mate tubing hanger connector that carries power and data via the Christmas tree and tubing hanger, together with a dry mate packer connector, have been custom designed for ABB by third party companies.

The basic system uses quartz pressure and temperature sensors in the choke for measurement of these parameters in the tubing and annulus. A spin-off project from ADMARC has been the development of a Downhole Optical Gauge System [DOGS™]. The DOGS system relies on a fiber optic pressure and temperature gauge system and is backed by a development/deployment contract with Shell Inter national E&P.

Such measurements are seen as complimentary to any intelligent completion system and ABB ultimately plans to replace the quartz sensors with fiber optics. The first of the ABB fiber optic systems will be installed in Brunei this month, Drakeley said. "We can measure pressure and temperature at up to five discrete points in the tubing string with the current DOGS configuration," Drakeley said.

The measurements made by these fiber optic systems were traditionally taken using electronic downhole gauges. The historic difficulty experienced with permanent electronic gauges installed downhole made fiber optic systems a more attractive option once the technology was available. Such a system moves the delicate electronics above the wellhead where they are much easier, and less expensive, to maintain or replace. The fiber optic system uses sensors attached to a gauge carrier, which requires permanent deployment. "This is not a retrievable gauge system," Drakeley said.

In June of 1999, ABB performed its first trial installation of the fiber optics system in a non-producing well in Aberdeen, Scotland. Shell International E&P funded part of the development of the system and this deployment. This part of the intelligent well system is ready to go, Drakeley said.

ABB has a system designed for 7-in. tubing, which will be installed in Brunei. The system for 5.5-in. tubing is ready, except for the smaller gauge carrier. Gauge carriers for other tubing sizes will follow. Drakeley said the only real difference between the various tubing size systems is this gauge carrier.

ABB is not the first to deploy fiber optic sensor systems in a well. A company called Optoplan has deployed fiber optic sensors downhole in the North Sea. Another company, Sensor Highway, has performed distributed temperature measurements downhole and is developing a distinct pressure gauge.

These companies are developing fiber optics for downhole applications, but ABB is developing them for a wide variety of applications in several industries. "Downhole is just part of our extensive fiber optics research and development program," he said. As a result, ABB plans to bring onto the downhole market two new generations of fiber optic sensing systems over the next two years. "DOGS is our market entry system," he said.

Another major component to an intelligent well is the ability to control flow through different zones. ABB has developed a flow-control device that has both multi-position as well as just on-and-off control. Drakeley said the entire, integrated system should be through prototype testing and be ready for commercialization by mid 2000, although some of the components will be ready sooner.

ADMARC is not the first intelligent completions system to market. Another company was the first to introduce downhole chokes to the market. Other companies have deployed chokes. Still, Drakeley said, the firm hopes to offer a more integrated product, which includes its own flow meters and can readily interface with other downhole sensor systems from suppliers other than ABB.

Drakeley said ABB recognizes customers may want to choose downhole components from a variety of sources, so the company has developed an "open architecture" system. System interface details have already been provided to other suppliers.

The ABB choke design can have up to two distinct activation mechanisms. These can be either all electric, electro-hydraulic, all hydraulic, or a mixture for dissimilar redundancy. Such redundancy is important, Drakeley said, because if this system fails then it is necessary to intervene and mechanically shift the choke, which is very expensive in a subsea well. The ABB reliability analysis also quantifies the degree of improved overall system reliability gained by using dissimilar actuators.

The electric/hydraulic options allow operators to customize the actuation device to the needs of a specific application or preferences of their operators. With an all-hydraulic system, there is a limit to the setting depth. Also, there is a limit to the number of devices that can be controlled. The all-electric system is more expensive, but offers greater functionality. Also, the all-electric and electro-hydraulic control systems can control a larger number of devices.

In addition to the cost savings of the hydraulic system, Drakeley said, a number of operators prefer them because the operators are used to hydraulic actuators from their experience with subsurface safety valves. While many people like the simplicity of a single electric line powering the electric motor to control the choke, Drakeley said, this is a new technology and there is still a comfort factor in some parts of the industry to consider. Long term, the consensus in the industry appears to be that electric control, particularly for subsea applications, will be the standard.

Several companies are working on downhole flow meters, but ABB hopes to be the first to address all aspects of the system in house, including two types of flow meters. These are both non-intrusive flow meters, meaning they do not interfere with flow. The first is a mass flow meter that measures flow, but does not discriminate between oil, water, and gas.

The helical resonance downhole water cut meter is the second device that ABB is developing. It also is non-intrusive, relying on the

frequency of electromagnetic waves, transmitted by a sweep generator. The frequency and amplitude of these waves is affected by the flow through the pipe. These changes can be conveyed by an algorithm into the relative proportions of oil, gas, and water in the flow stream.

The initial version of this tool will measure water cut, but ultimately the technology will be developed further into a full-blown, downhole multi-phase flow meter. An advantage of this meter over existing technology is that it uses theoretical calculations, set initially at the factory, to take measurements. This means the meter does not have to be calibrated in the field. It does require a base-line salinity measurement of the water, but once this is measured on site then the tool is ready to go.

"There are a number of customers ready to put it in their flow lines to gain experience with the device," he said. The first field deployment is expected to be mid-2000.

ABB Offshore Systems wants to offer a variety of downhole control and communication system architectures that links the various sensors and chokes downhole. Both communications on power (COPS) and separate communications and power systems are being offered.