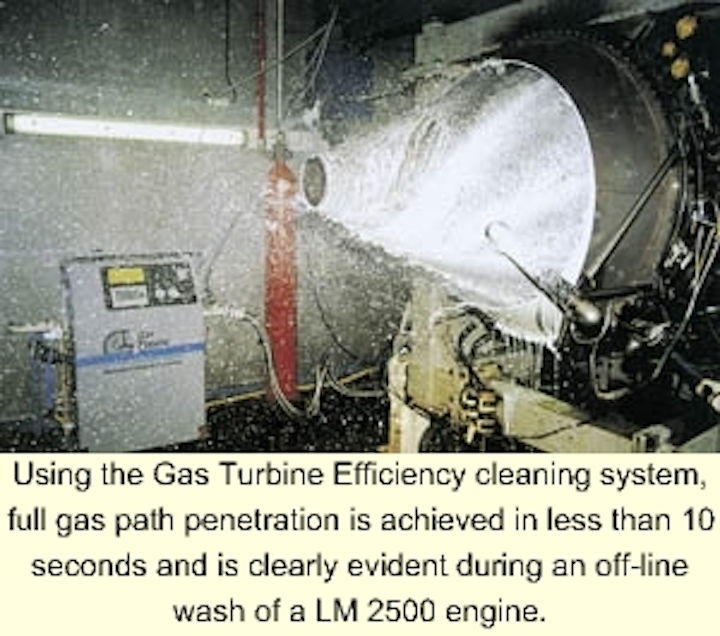 Statoil has commissioned Gas Turbine Efficiency to supply two high pressure engine washing systems. The equipment will be used to clean the General Electric LM 2500 gas turbines operating on the Sleipner platform where they are expected to make a significant improvement to the turbines' productivity.

The contracts follow a test program conducted by Statoil which included trials offshore and on a test bed. Detailed digital borescope video and computerized output performance monitoring, coupled with a six month offshore field trial, proved the effectiveness of the system. The trial confirmed Statoil's confidence that the on-line engine washing concept developed by gas turbine efficiency will significantly extend the intervals between the occasions when it is necessary to shut down the power units for cleaning.

Previously, Statoil had found it necessary to shut down engines installed on an oil produc tion platform after every 1,000 hours of operation for cleaning. On occasions this had to be done up to 16 times per year. The company had hoped to extend cleaning its engine intervals to every 2,000 hours, but the trials demonstrated that the effectiveness of the process actually enables the intervals to be lengthened to 4,000 hours. With each shut-down costing the company an estimated NKr 4 million, the installations should achieve a very brief pay-back period.

The Gas Turbine Efficiency system owes its success to the use of patented injection nozzles that can be installed permanently around the air intake of the engine or supplied as a mobile unit. The nozzles enable a combination of detergent and de-mineralized water to be delivered under high pressure throughout the engine while it is running. They are manufactured to comply with strict quality standards and their welds are all subjected to detailed non-destructve testing prior to installation. The design of the spray nozzle manifold is such that a permanent installation can be fitted within three hours.

Trials on the Sleipner platform demonstrated that the spray system can be used when the engine is running at full power. Users also have the option of running the engine in idling mode as this still enables it to regain full power more quickly than if it had been stopped completely. This is in contrast with engines being cleaned by low pressure systems that usually have to stop and cool down before cleaning. It is then necessary to crank them by hand if the operator is to be confident that the cleaning liquid has reached all parts of the engine.

The development program began in 1989 and revealed the importance of spraying only small droplets of water into the engine. This is achieved by the unique design of its spray nozzles and by operating the system at 50-80 bar. Because alternative systems tend to function at much lower pressures of around 5 bar, they tend to release much larger water droplets into the engine. Trials have shown that these fail to wash effectively as the centrifugal forces present force the liquid away from the surfaces to be cleaned and prevent them from reaching the engine's compressor. They also have the potential disadvantage of damaging the coatings applied to the engine's components.

An important benefit of the high pressure system is that only limited amounts of water and detergent are necessary for it to work effectively. Because many of the cleaning fluids available are both expensive and toxic, this has the important benefit of minimizing the cleanup work necessary afterwards. The nature of the cleaning fluid used will depend upon the individual condition of each engine although Gas Turbine Efficiency recommends using just water whenever possible. Besides reducing fluid consumption by a factor of 10, the system can bring substantial cost savings while also eliminating any problems associated with pollutant run-off.

Cleaning fluid and power for the system is delivered from a self-contained control cabinet which pre-heats the fluid to 60 deg C. This will contain two 200 liter reservoirs which are more than adequate for cleaning a LM 2500 engine. A single cabinet can be installed to serve multiple turbines. Among other makes, Rolls Royce and ABB Alstom turbines have also been cleaned successfully by Gas Turbine Efficiency.

Deliveries of systems to Statoil began in December when the first was installed on the Heidrun platform. Two others are scheduled for delivery before the end of March when they will be installed on the Siri platform. Orders are also in hand to supply two for Phillips Petroleum which will use them for cleaning Dresser Rand gas turbines on the Ekofisk platform.

Gas Turbine Efficiency is also optimistic about a trial on its system to be conducted in June by the US Navy. The Navy has 450 LM 2500 engines in use and intends to consider the system's suitability for improving their performance.