Salamander Energy says it expected to take delivery of the jackup Ensco-53 in late March for a drilling program on the B8/38 license in the Gulf of Thailand. 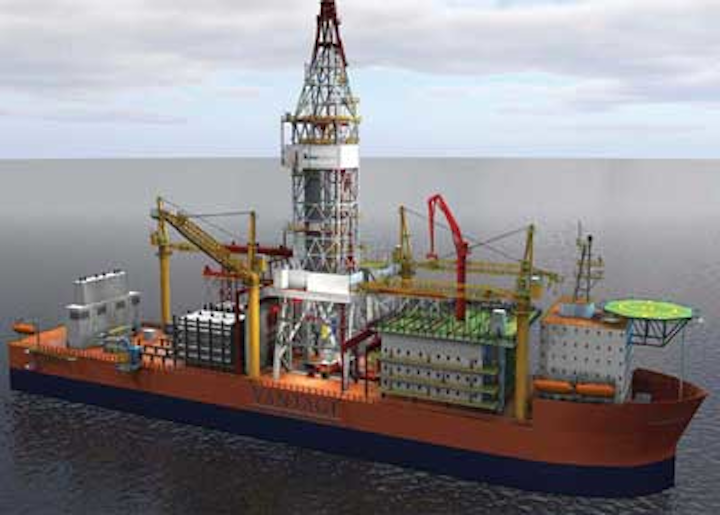 Salamander Energy says it expected to take delivery of the jackupEnsco-53 in late March for a drilling program on the B8/38 license in the Gulf of Thailand. The rig arrived late due to weather downtime and slippage in the previous operator's campaign.

Salamander plans two development and two exploration wells, with the development wells being drilled first to benefit from current oil prices. Exploration drilling should follow in May.

The company has also contracted Atwood Oceanics' jackupAtwood Mako for work across its licenses in the Greater Bualuang area.

Atwood Mako is a new rig which is currently being built in Singapore. It should be delivered in September. It is designed for drilling in water depths of up to 400 ft (122 m) and drilling depths of 30,000 ft (9,144 m).

Salamander has contracted the rig initially for 12 months, extendable by up to a further 12 months. The company says that this arrangement provides greater certainty in the timing of its planned drilling activity in the Gulf of Thailand and also flexibility in selecting development, appraisal, or exploration locations.

It is currently looking for the rig to drill 16 development wells from the Bravo wellhead platform in the main field and the East Terrace, and to drill exploration wells on the G4/50 license.

James Menzies, CEO of Salamander, said: "Following our farm in to block G4/50 surrounding our Bualuang production license area, we are now in a position to take on drilling rigs under long-term contract to explore, appraise, and exploit our expanded acreage base in the Gulf of Thailand.

"The signing of this long-term drilling contract is a significant step forward for the Group in its plans to unlock the material upside in the Greater Bualuang area," Menzies added. "We can now plan our operations with greater certainty and avoid the traditional frustration of rig delays."

Aker Solutions has received a letter of award from Daewoo Shipbuilding & Marine Engineering to supply a further two drilling equipment packages to the Cat D drilling rigs the yard is building for the rig operator Songa Offshore.

The development of the Cat D semisubmersible drilling rigs was initiated by Statoil. The Cat D drilling rig is a new generation drilling and well intervention vessel, purpose made for the needs for North Sea operations. The first contract, for two drilling equipment packages, was announced last summer.

The two units will be delivered in 2015. The contract includes topside drilling equipment, procurement, and commissioning of the rigs at the DSME yard.

Thor Arne Håverstad, head of Aker Solutions' drilling technologies business, said: "The development of the new rig concept has been enabled by combination of Aker Solutions' field-proven equipment and systems expertise, and our flexible and competent engineering capabilities. We look forward to extend and continue the strong cooperation with DSME, Songa, and Statoil." The contract value was not disclosed.

Vantage Drilling Co. has agreed to acquire the ultra-deepwater drillshipDragonquest from Valencia Drilling Corp. for $164 million.

Daewoo Shipbuilding & Marine Engineering Co. Ltd. has completed construction of the vessel and Vantage will pay the final construction payment, project costs, equipment, and spares. The total delivered cost of the drillship will be about $800 million. Closing was expected this April. Upon delivery, theDragonquest is expected to be deployed in the U.S. Gulf of Mexico, pursuant to an eight-year contract with Petrobras.

Statoil has awarded Dockwise a reservation contract for transportation of a spar platform to the Norwegian Sea. The spar will operate on the Aasta Hansteen (ex-Luva) field, but final contract award depends on sanction for the project from the Norwegian authorities.

This was one of six new contract wins for Dockwise with a total value of $57 million. The other involve transport of four drilling rigs to Rotterdam, Saudi Arabia, and Singapore during the first half of this year, including a double rig cargo on the Black Marlin from Singapore to Rotterdam. Dockwise will also deliver various barges to Brazil this spring.

Saipem has signed an extension of its contract with Petrobel for the charter of the jackupPerro Negro 4 offshore Egypt.

This extends the rig's stay in the sector for three years, starting from the current quarter.

Finally, Eni has extended the charter of Saipem's semisubmersible rigScarabeo 7 to drill in Indonesian waters. The contract, which had been for three years starting from 4Q 2011, now runs for a further 15 months until 1Q 2016.