By virtue of its acquisitions of a number of contractors in the offshore engin-eering and construction business, the latest of which was Aker Maritime's deepwater activities, Coflexip Stena Offshore believes it has full capabilities for deepwater and subsea projects. 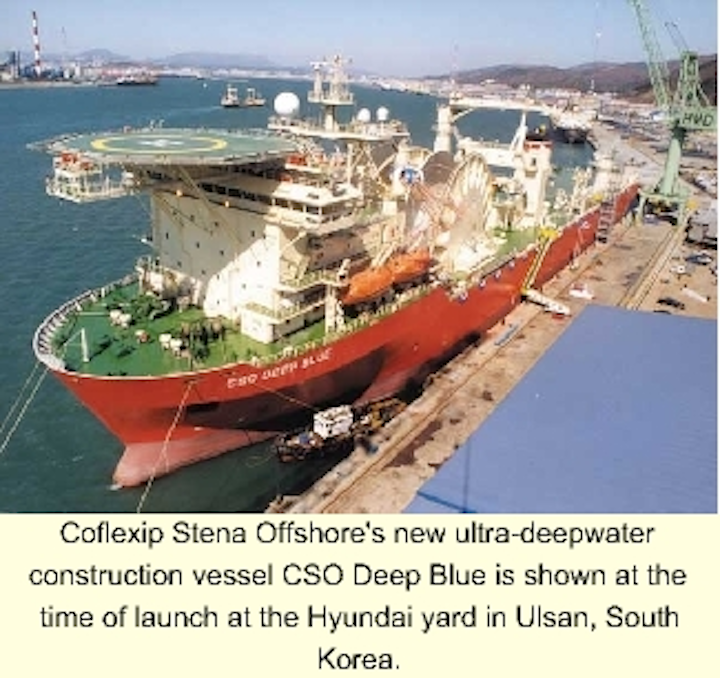 By virtue of its acquisitions of a number of contractors in the offshore engin-eering and construction business, the latest of which was Aker Maritime's deepwater activities, Coflexip Stena Offshore believes it has full capabilities for deepwater and subsea projects.

The front end engineering and fabrication capability that came with the acquisition of Aker Maritime's deepwater business means that Coflexip Stena Offshore (CSO) can now offer many types of field services, from conceptualization, delivery, and installation through abandonment. It can also tackle major projects in conventional water depths, thanks to an association with Technip.

CSO has been in expansion mode for some time. Since 1996, the company has been looking to develop its engineering capacity, says Chairman and CEO Pierre Marie Valentin, and to increase its presence in the blossoming Gulf of Mexico deepwater sector. Acquiring RJ Brown gave CSO new capability in this region in pipeline design and subsea field development. The next step, in April 1999, was to create a deepwater field development division, with conceptual engineering centers in Houston and Aberdeen.

In summer of the same year, CSO made a pitch for the French pipelay/fabrication specialist ETPM but lost out to Stolt Offshore. Disappoint-ment subsided last year when CSO received an injection of capital via a 30% stake taken in the company by fellow French contractor Technip. This actually left CSO in a better position to mount a major acquisition, which duly arrived in October through Aker Maritime.

CSO concluded the deal early this year, paying Aker $625 million for its deepwater division, including $112 million of assumed debts. The companies in that division had combined revenues of over NKr 3 billion, with 2,750 employees, mainly in the US, UK, and Finland, but with representation also in Australia, Brazil, the Caspian, and West Africa. Around 1,000 of that number were employed in engineering and project management services, while most of the rest were fabrication staff in Corpus Christi in the US, Pori in Finland, and Newcastle in the UK.

Pori had produced the only three Spar prod-uction platforms - all for the Gulf of Mexico - and was also working on two new ones for Boomvang, Nansen, and Horn Mountain. Aker's other deepwater engineering strengths included engineering and construction of floating production, storage, and offloading (FPSO) systems, tension leg platforms (TLPs) and semisubmersibles, and also riser/mooring system design.

CSO reaped an almost immediate reward in the Gulf of Mexico in February, when BP awarded the new CSO Aker Maritime division a rolling contract for up to five new truss-type Spar platforms and associated mooring systems in water depths of 1,200-1,830 meters. The following month the re-named Houston-based operation CSO Aker Eng-ineering secured a five-year contract from BP for its deepwater projects in the same region.

As it turned out, Aker's assets were more complementary to CSO than ETPM's. "At least we don't have to worry about engineering duplication," Valentin said, "which is a great advantage. We don't have to discuss numbers of people to fire, or businesses to prune." A program of integration is being conducted, and a new organization structure was expected at the time of this writing. In the meantime, Valentin added, "people can continue working the way they have been working." Svein Eggen of Aker was appointed executive head of the new company.

The main cultural problem for the Aker staff is adapting to CSO's different management methods. "We have presented them with our procedures," says Valentin. "One key of CSO's success over the past five years is that it has been run in a very clear way. We have a system of autonomy for our managers and a very precise way of doing things. You cannot 'buy' an image of reliability and transparency with the stock market without having clarity internally. I am surprised by the number of companies making big statements these days."

Despite having secured BP's trust in the Gulf of Mexico, CSO will have to earn it, as it has done offshore Brazil where it has been the dominant pipelay contractor. "We have formed a long-term relationship with Petrobras," Valentin says, "but we have still had to fight for each parcel of work. Now we are also building ties in Africa."

According to CSO Chief Operating Officer Tom Ehret, "What drove BP to approach the Gulf of Mexico as they have done was their concern that they would face a lack of resources in the industry to deal with their deepwater projects. So they wanted 'partnerships' that would match their intellectual and physical capabilities." However, from the contractor's viewpoint, he adds, "you don't want to be signed up to too much. If that trend continues, the contractor has to be more selective.

"There are parallels with Exxon in Angolan offshore Block 15, but it won't operate the same way. They and Sonangol will consider the question of availability of resources - there's no silver bullet solution for those things. We'll try to be opportunistic. We don't want to have to say 'yes' to everything."

Valentin said CSO has entered long-term frame agreements with oil companies for well servicing off Norway. "Oil companies are like great ladies - they all want to be different and to be known for their different habits - so we have to adjust. Our local units around the world are not always able to meet the requirements of the local oil companies, so we have to establish a very good organization that can transfer resources from one unit to another. We have to teach our people to be flexible.

"CSO is a multi-national company. We are not as tied to our mother country as are most of our competitors." Ehret said, "We now have 6,000 people in the group, but only 800 of them are French, and 700 to 800 are Brazilians. So ours is a truly multi-national set-up, which can be good in terms of leverage. It's more acceptable in some areas not to be too heavily identified with one country."

Interestingly, through Aker Engineering in Houston, CSO has become one of the largest employers of Indian ex-pats in the city. Its associate Technip has 1,000 people in Malaysia. "Aker has brought us very good access to Russians through its base in Moscow," he adds. Through the 50% owned PI Rauma consultancy in Finland, CSO also has engineering project management staff in Astrakhan and Baku. Previously, CSO had difficulties penetrating the Caspian sector due to the lack of subsea work.

Now, in addition to its overseas manufacturing plants for flexibles, rigid pipe, and umbilicals in Brazil, the UK, and Houston, the company is studying new potential sites in Nigeria and Angola.

Early in 2000, CSO announced completion of a two-year qualification program for new types of risers it had developed for deepwater projects. One was a reeled steel catenary riser, and the other was a hybrid catenary riser, comprising two flexible sections, top and bottom, with a central rigid section.

The latter combines the advantages of conventional flexible and rigid reeled technologies. The configuration can be similar to that of a flexible riser, ensuring good fatigue resistance, shorter length, and a smaller footprint than an all-steel catenary riser (SCR). This, in turn, provides greater flexibility for the field layout and reduced tension at the top of the riser. BP's Nile project was the first to combine rigid pipe-in-pipe with a completely reeled SCR, Ehret says. The hybrid riser is now being included in new project bids.

In the same field, CSO has developed an integrated production bundle for deepwater projects. "We haven't sold any yet, but the technology is fully qualified," he says. "They are particularly useful for active heating. We have also been working on other hybrid solutions, such as mid-water buoys with rigid tensioned risers and flexible jumpers." The aim over time is to combine these different technologies to greatest effect, he adds, capitalizing also on Aker's position in top-tensioned risers.

CSO's investments in well intervention vessels have been slow to pay off, but the workload has increased to the point where the CSO Seawell is 100% occupied. Most opportunities have been on the UKCS, but recently the vessel secured its first contract in Norwegian waters. There had been a stigma in Norway over using a monohull for light well duties.

Ehret predicts these vessels will become a necessity off Angola for mass-subsea well projects like Kuito and Girassol. Traditionally, he said, subsea wells were worked over by drilling rigs, which will not happen in deepwater.

Genesis, the CSO Aker design group based in London, has evaluated long subsea tiebacks for Shetland area developments. This work will continue, in tandem with studies on long-length flowlines and umbilicals, which Ehret claims would be "pretty ideal for the CSO Deep Blue." CSO also designs and makes umbilicals through Duco's facilities in Houston and Newcastle, UK. "Steel tube umbilicals are an evolving product, like flexible pipes. There are so many potential combinations, including with fiber-optic cables."

CSO strengthened its robotics capability last year through UK-based Slingsby Engineering. This has now been integrated with Perry Tritech into a new division called Perry Slingsby Systems, with manufacturing plants in Florida and northern England.

"Slingsby had an extremely good level of R&D and engineering capability," says Ehret, "although it had not been pushed to sell its products." One of its new developments is an all-electric ROV. Perry Slingsby, combined, will do more than 60% of its business in subsea trenching vehicles, he adds.

"However, we need to look beyond merely making vehicles. The ability to develop manipulators, intervention packages becomes even more crucial as one advances in deepwater. Two of our systems will be working with the CSO Deep Blue within a powered cage, in 2,000-3,000 meters water depth."

AUVs (autonomous underwater vehicles) are not necessary, he claims, if the vehicle can be kept on the seabed in DP (dynamically positioned) mode, following incorporation of high-level positioning systems. The high investment costs of AUVs can only be justified by substantial upfront business, he claims. "We are looking at a partnership in that area, but there's no point in developing such a system on your own when the hardware market is not that large."

CSO said it is continues to augment its deepwater vessel fleet. The ninth will be the CSO Constructor, currently being converted under a $30 million program by Cammell Laird in Tyneside, UK, to allow it to lay rigid and steel pipe in waters down to 1,500 meters.

The hull and deck will be lengthened by 15 meters and widened by 5 meters to bring the vessel's pipeline payload up to 3,000 tons. The Con-structor will be equipped with a larger crane, and two remotely operated vehicles (ROV) will replace the diving system.

It will be able to install rigid lines using CSO's M-J lay system, or flexibles and umbilicals stored in a 2,000-ton below-deck carousel, via a vertical lay system.

"There will be refits on other CSO vessels," Ehret said, "and the company will sell other vessels. We can't go into details for now. We will invest significantly in our fleet in the years to come. "